Riley Kench, Kimberlee Davison, Kathryn Boddie
In this lesson, learn the power rule for the derivative of exponents. Moreover, learn to understand how to apply the power rule of derivatives for various cases including negative powers. Updated: 09/30/2021

What is the Power Rule?

Similarly, power functions of positive odd power will have the same general shape. Below is the graph of {eq}y=x^3 {/eq} which will show the typical shape of a positive odd-powered power function ({eq}x^{2n+1} {/eq}):

Although power functions can look differently, they will always be of the forms above depending on if they are odd-powered or even-powered power functions.

The power rule formula for a fundamental power function is: 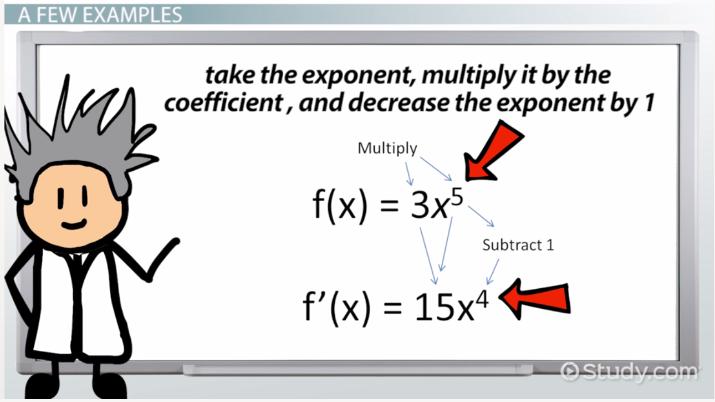 Coming up next: Trigonometry: Sine and Cosine

The power rule works exactly the same as in the positive exponent case. However, the value being brought down and multiplied to the power function is now negative and the exponent becomes more negative after differentiation is performed. Here are some examples to show these new properties:

Finally, the case of the sum of multiple power functions, which is called a polynomial, and the case of negative exponent were explored. The sum rule for derivatives and the constant multiple rule for derivatives were used in these calculations. In the polynomial case, the power rule applies to each of the individual power function terms. Therefore, in order find the derivative of a polynomial, simply differentiate each term individually using the power rules. Now, for power functions that have negative exponents, the power rule will also work. The only difference compared to the positive case is that the number brought down and multiplied is negative and the exponent becomes more negative. Here are the highlights:

Why Use the Power Rule When There Is Already a Definition?

Why should we memorize another rule rather than just using the definition of the derivative? The answer to this question is that the rule is MUCH quicker and easier to work with.

The answers agree and the power rule was much quicker!

The answers agree again, and the power rule was much simpler to use.

3. For h(x), using the definition we get

The answers agree again and the power rule was, once again, much easier to use.

Why Does This Work?

Although the examples above are not a proof, they likely convinced you that the power rule works. The actual proof is done the same way - using the limit definition of the derivative for the function x to the nth power. However, if you do not know the Binomial Theorem, it can be tricky to write out. The idea is that when you expand (x+h) to any power, you get a term with just x to a power, and then every single other term has an h in it. The second term in the expansion is always equal to nx^(n-1) h , and all the other terms with h's in them have h to a power higher than 1. The first term of the expansion, x^n, disappears when combining f(x+h) - f(x) in the numerator of our definition. Then, all other terms have an h cancel out with the h in the denominator - your first term of what is left is now nx^(n-1) and all other terms still have at least one h multiplied in them. So, when h goes to 0, all terms vanish except for the term given by the power rule: nx^(n-1). If that was hard to follow - try reading through it again while looking at the examples done above.

How does the power rule work?

The power rules works on power functions of the form f(x)=ax^n. The rule finds the derivative by first bringing the power of x (n) down and multiplying it to the function and then subtracting one from the power. The derivative is then f'(x)=nax^(n-1).

How do you find the derivative when the variable is in the exponent?

What is the power rule in exponents?

The power rule for the derivative of a power function is (ax^n)'=nax^(n-1). That is, if a function f(x)=ax^n is given with a, n both real numbers and nonzero, then its derivative is given by f'(x)=nax^(n-1) (bring down the power and multiply it to the function and then subtract one from the power).

Power Rule for Derivatives of Exponents | What is the Power Rule?
Related Study Materials

How to Find Derivatives of Implicit Functions

Understanding the Properties of Limits

Derivative of a Function | Formula & Examples

The Linear Properties of a Derivative

Applying the Rules of Differentiation to Calculate Derivatives

Notations for the Derivative of a Function