What is an Omniscient Narrator?

An omniscient narrator can see every character's thoughts, feelings, and actions in a work of fiction. Because of this, this type of narrator is sometimes referred to as "the god narrator" or "god-like." Generally, the third-person omniscient narrator is dispassionate and shows no preference or favoritism for any characters within the story. However, the third person limited narratorpresents the point of view of just one character. This type of narration uses third-person pronouns (she/her, he/his, they/their) instead of the first person (I) in telling the story. 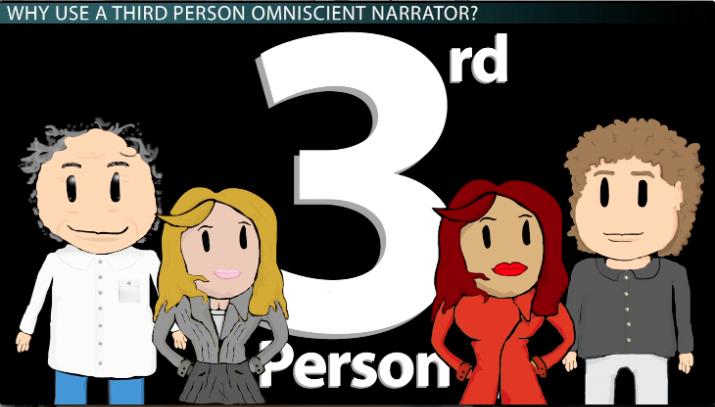 Coming up next: What is Parallelism in Literature? - Definition & Examples

A writer can also choose to use the first or second-person point of view. While the third-person narrator is characterized by the use of she, he, and they in telling the story, the first-person point of view is told using I. This is an immediately engaging form of narration but limits the reader to understand the action of the story to that of the single character. This narrator may or may not be reliable. The reader is fully immersed in the narrator's world, but that world is entirely subjective, dependent on the viewpoint of the I narrator. The second person point of view uses the pronoun you and is often used in giving directions. It is rarely used as a narrative voice in fiction because it can become challenging to engage the reader with the constant repetition of you.

Why Use a Third Person Omniscient Narrator?

There are several advantages to using a third-person omniscient narrator.

Writers who use this narrator:

There are a few disadvantages to writing with a third-person omniscient narrator. One is that it can build distance between readers and the story because readers' sympathies may become diluted among many different characters rather than focusing on just one character.

Pride and Prejudice by Jane Austen is written using the third person omniscient. The novel, published in 1813, tells the story of the Bennet family as the five daughters try to find suitable men to marry. However, the novel also examines a society in which young women of a certain class had no options for the future except marriage. Austen's use of third-person omniscient allows her to tell both stories simultaneously: the Bennet sisters' story and the story of the society in which they find themselves.

"Not all that Mrs. Bennet, however, with the assistance of her five daughters, could ask on the subject, was sufficient to draw from her husband any satisfactory description of Mr. Bingley. They attacked him in various ways; with barefaced questions, ingenious suppositions, and distant surmises; but he eluded the skill of them all; and they were at last obliged to accept the second-hand intelligence of their neighbour, Lady Lucas. Her report was highly favourable. Sir William had been delighted with him. He was quite young, wonderfully handsome, extremely agreeable, and, to crown the whole, he meant to be at the next assembly with a large party."

In this extract, Austen's use of third-person omniscient begins with Mrs. Bennet, moves on to the daughters, cites Lady Lucas' information, and ends with Sir William.

In War and Peace by Leo Tolstoy, the author tells a vast and sprawling story about five aristocratic Russian families during the Napoleonic era in early nineteenth-century Russia. It is considered a classic of western literature.

"Each visitor performed the ceremony of greeting this old aunt whom not one of them knew, not one of them wanted to know, and not one of them cared about; Anna Pavlovna observed these greetings with mournful and solemn interest and silent approval. The aunt spoke to each of them in the same words, about their health and her own, and the health of Her Majesty, "who, thank God, was better today." And each visitor, though politeness prevented his showing impatience, left the old woman with a sense of relief at having performed a vexatious duty and did not return to her the whole evening."

Tolstoy's use of third-person omniscient narration is evident in this extract. He uses a "god-like" tone in describing the scene, telling readers how multiple characters feel and react. He could not provide such observation if he used first person, second person, or third person limited narration. Later in the novel, Tolstoy provides some history and engages in some philosophical musings. Only a third-person omniscient narrator would be able to do this.

"Juney had been her best friend from childhood, but now, Candace had to question that bond. She had told Juney so many secrets, had assumed that Juney understood that they were secrets, took it for granted that Juney would keep the confidence. But Juney had freely shared the story of her adoption with, oh, enough people that it was common knowledge. Candace was so angry, so wounded, so stunned."

Then the author switches the narration to a different omniscient narrator, and the reader sees an entirely different point of view.

"Juney texted Candace repeatedly the first day Ben told her that Candace was upset. "That wasn't your information to share," he said flatly. But Juney had thought it would help them understand why Candace was sometimes so prickly to be around, especially when everyone was talking about their families. She was just trying to make things easier for Candace! And now, suddenly, Candace was unreachable, unresponsive, and all Juney wanted to do was explain."

A contemporary novel with a shifting third-person omniscient narrator is We Are Not Like Them by Christine Pride and Jo Piazza. In this story, two women trade chapters back and forth in which they recount their experience of a series of events. Because each woman's understanding of the same events in the book is different, this type of narration works very well.

This type of narrator is rarely used in stories and novels. It requires the author to use I, but see everyone else's thoughts and feelings simultaneously. In The Lovely Bones by Alice Sebold, the I narrator tells the story of her own life and death. First-person omniscient is also used by Markus Zusak in The Book Thief. In this novel, the narrator uses I as Death itself.

An omniscient narrator can see everything that happens in a novel and see all the thoughts and feelings of every character. It is sometimes referred to as "the god narrator."

Authors use the third person omniscient to pull readers in. This encourages readers to make connections with the characters. This form of narration also allows the author to write using different voices which can move the action of the story forward.

What is an example of an omniscient point of view?

How do you know if a narrator is omniscient?

A narrator is omniscient if they can see several characters' feelings, thoughts, and motivations in a novel or story. This narrator can also describe scenes and events.

What is an example of third-person omniscient?

An example of third-person omniscient is a story in which the writer follows one particular character (using she or he) but also provides readers with the thoughts and feelings of others.