Copyright
Maria Airth, Elizabeth Friedl
Learn about the three layers of the Earth: the crust, mantle, and core. Discover what scientific principle causes the different layers of the Earth and their properties. Updated: 10/30/2021

What are the Three Layers of the Earth?

The question, ''How many layers does the Earth have?'' has a complex answer. When referring to the rocky portion of the Earth, there are three layers of the Earth. However, the planetary rock referred to as Earth does not just consist of the rocky layers: which is where the complexity arises.

Thinking of just the rocky layers, what are the three layers of the Earth? Earth's layer's names are:

These three layers make up the rocky portion of the Earth and are similar to the layers found on many of the rocky planets in the solar system.

How Many Layers Does the Earth Have?

It is already easy to see why the question of how many layers make up the Earth is difficult to answer because within the three main layers the core can be seen to have two layers (inner and outer). This is true for the other layers as well.

As well as the individual layers of each of the main three layers of the rocky Earth, the Earth also consists of many layers of the atmosphere, the gaseous bubble surrounding the planet. The Earth's atmosphere is made up of five layers that extend 10 miles out from the surface of the planet.

This lesson will focus on the rocky layers of the Earth with the understanding that these are not the culmination of all the layers that make up the planet Earth. 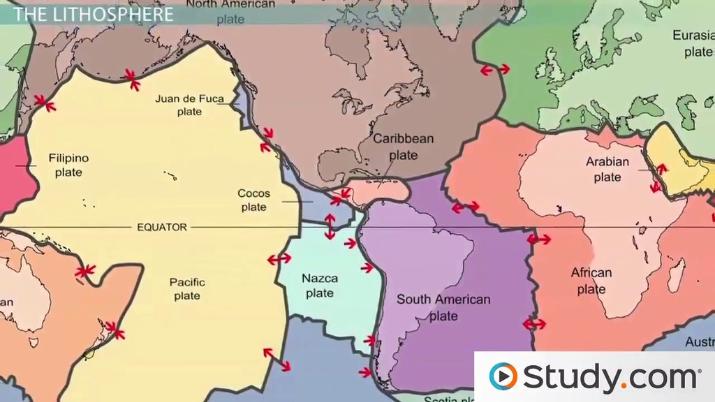 Coming up next: How Scientists Study Earth's Interior Structure

It is logical to start an exploration of the Earth's layers by going to its center, the core. The core of the Earth consists of a solid metal inner core and a liquid metal outer core. In this image, the core is represented by the central-most ball of yellow (inner core) and the surrounding area of orange (outer core).

These two layers are defined as a single layer, the core, due to their metal makeup, their similarities to each other, and basic differences from the other layers. The core begins about 1800 miles below the surface of the Earth (where the outer core begins) and continues slightly more than 2000 miles to the Earth's ultimate center.

The inner core of the Earth consists of extremely hot (over 9000 degrees F) metal (mostly iron and nickel) under incredible pressure (as much as 3.6 million atmospheres of pressure). It is this extreme pressure that makes the inner core solid. The temperature is hot enough to melt iron, but the pressure is too high to allow the melting process to occur.

Thus, the inner core is a solid ball of hot, high-pressure metal. It is interesting to note that some scientists refer to the inner core as a plasma acting as a solid instead of just a simple solid. This is due to the fact that its heat should melt the iron, but the pressure prohibits the melting. These characteristics lend the material to be defined as a plasma (like the sun) rather than a solid.

Moving out from the core, the next layer is the mantle. The mantle makes up about 84% of the Earth's total volume. Starting about 20 miles below the Earth's surface, the mantle extends approximately 1800 miles towards the Earth's core, making it the largest layer of Earth. In comparison to the outer core, it is about the same thickness, but due to its much larger circumference (being further out in the spherical planetary layers), it is much larger in total volume than the outer core.

The mantle is considered semi-solid, with flowing molten iron, magnesium, and silicon making up its layer. The mantle, like the core, is made up of a combination of other layers of the mantle. These layers are:

Like the layers in the core, these mantle layers are similar in many ways, but are subtly different enough to constitute recognizing them as a separate layer of the mantle itself.

The central layer of the mantle is known as the transition zone due to the transformation seen in rocks in this layer. The transition zone extends from 250 miles to 410 miles below the Earth's surface. Rocks transition from their surface structures to a much denser form. It is believed that this increase in the density of rock in the central area of the mantle prohibits slabs of the lithosphere (lower area of the crust and upper mantle) that falls into the mantle from falling completely through the mantle.

The central mantle, or transition zone, holds as much water, in the form of hydroxide, as can be found in all the Earth's oceans on the surface of the planet. Due to the high temperature and pressure found in the mantle, the hydroxide ion is trapped in the rock structures that enter the central mantle. It is believed that this water can enter the mantle during subduction (when slabs of tectonic plates are pushed into the asthenosphere and fall into the transition zone).

The crust of the Earth is that part of the rocky surface of the Earth that is livable. It supports all life on Earth and in the oceans. It is the thinnest layer of the three main layers of the Earth at only about 20 miles down on average. The crust is thinnest at the bottom of the ocean, approximately 3 miles thick, and thickest when measured from the tops of mountains. The crust is very brittle, but solid in its construction. It is made of rocks, minerals, and metals.

When studying the crust, it is necessary to review the lithosphere and information pertaining to tectonic plates.

The lithosphere is made from the lower portion of the crust and the uppermost part of the mantle. This area of the Earth is in constant motion, with the outer crust being pushed down into the mantle to be melted, cooled, and reintroduced to the crust through the form of earthquakes and/or volcanos breaking the brittle crust and forcing material up through the mantle (lithosphere) and onto the outer limit of the crust.

Scientists have been able to study the crust of the Earth almost in its entirety. Some areas at the bottom of the ocean have not been explored, but much of the Earth's crust has been explored and studied at length.

It is the slow movement of tectonic plates due to the convection currents in the mantle slowly pushing and pulling on the large pieces of crust that causes the creation of mountains (as tectonic plates crash together and push up the outmost crust) and the eruptions of volcanos (cracks in the crust that allow a direct path for the magma of the mantle to escape to the Earth's crust). A fault line refers to the line between tectonic plates that sees geological activity when the plates move toward and away from each other. Seismologists are geologists that study the movement of the crust known as earthquakes and measure their magnitude. These earthquakes are commonly found along tectonic plate fault lines.

What Scientific Principle Causes the Different Layers of the Earth?

A logical question to entertain while learning about the layers of the Earth is: What scientific principle causes the different layers of the Earth? The answer is simply gravity. The progression from the outer layers of the Earth to the central layers shows increasing density of material. That is because gravity pulls the densest materials down toward the center of the Earth. In its formation, as the core of the Earth formed, less dense material, and elements incompatible with the highly dense form of iron (in the inner core) were pushed to its outer layers. It is gravity that formed and layered the Earth and its composite components.

There are three main layers of the Earth. The crust is the thinnest layer making up the livable area of the Earth. It is brittle and composed of many rocks, metals, and minerals. Next is the mantle, the thickest layer of the Earth, made up of molten rock and minerals that slowly move in a convection style. This convection current in the mantle causes earthquakes, volcanos, and other seismic activity in the crust due to the movement of tectonic plates. Tectonic plates are pieces of the lithosphere (part of the crust of the Earth and the upper mantle together).

The innermost layer of the Earth is the core. The core contains an outer core which is liquid iron at extremely high temperatures and an inner core, a solid-state of super-heated iron kept solid due to extreme pressure. These layers, and their sublayers within each main layer, were caused by gravity pulling the densest material to the center of the Earth.

What are the three layers of the Earth's mantle?

The three main layers of the Earth are: crust, mantle, and core.

These three layers each have multiple layers as well.

What are the three layers of earth and which one do we live on?

The crust, mantle, and core are the three main layers of the Earth. The only layer that can support life is the crust. Scientists have studied most of the Earth's crust but have yet to study the entire ocean bed floor (the thinnest part of the crust).

What is a Main Sequence Star?

The Effect of Accumulation & Wastage on Glacier Formation

What Is the Immune System? - Our Body's Defense Against Pathogens

The Layers of the Earth: Facts, Composition & Temperature

Evidence for the Mechanism of Continental Drift

Layers of the Earth: Lesson for Kids

Earth's Core Facts, Temperature & Composition | What is the Core of the Earth?

Plate Tectonics: A Unified Theory for Change of the Earth's Surface

Earth's Interior Structure & Study | What is Inside the Earth?