Chapter 17 of To Kill a Mockingbird

To Kill a Mockingbird has become a staple in American literary education. This Pulitzer prize-winning classic written by Harper Lee tells the story of Scout Finch and her experiences growing up in Depression-era small town Alabama. It is used in schools across the country because of its thoughtful exploration of prejudice and social injustice. Scout and her brother Jem must face the loss of childhood innocence as they experience the hatred of their neighbors when their father Atticus, a lawyer, decides to represent Tom Robinson, a black man falsely accused of raping a white woman.

Chapter 16 sets the stage for the beginning of the trial. The small town of Maycomb is overrun with people from across the county who have come to bear witness. Scout, Jem, and their friend Dill hide in the crowd so that Atticus will not notice them. They go up into the balcony where members of the Black community are relegated. Chapter 17 of To Kill a Mockingbird covers the first two witnesses of the trial; Sheriff Heck Tate and Bob Ewell, father of the alleged victim. 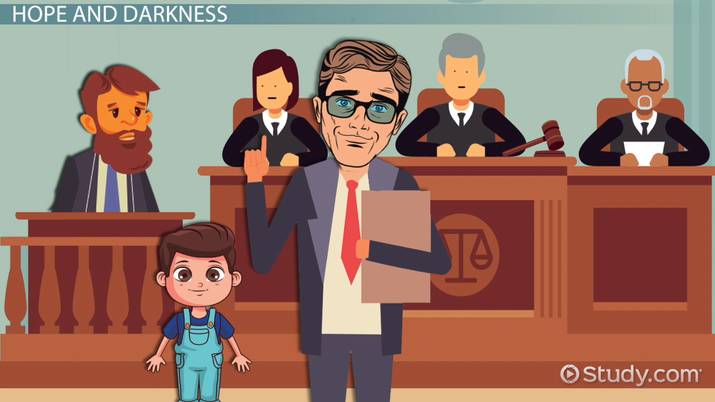 Try it now
Back
Coming up next: To Kill a Mockingbird Chapter 18 Summary

To Kill a Mockingbird Chapter 17 Summary

Chapter 17 takes place in the Maycomb Courtroom. The trial is set to begin and the first witness, Sheriff Heck Tate, is called by the prosecution to testify. Tate gives his recounting of the night of November 21, when the alleged rape occurred. He tells the prosecution that he had been asked by Bob Ewell to come out to the Ewell house. When he arrived Bob told him of the rape. Tate examined Mayella, Bob's daughter. Tate explains that she was pretty badly beaten up. When Tate is turned over to Atticus for cross examination, Atticus first asks the Sheriff if a doctor was called, to which he replied "no." Atticus then makes a point to ask Sheriff Tate to describe her injuries. When he mentions a black eye, Atticus asks him which eye. The Sheriff replies that it was the right eye and that the whole right side of her face was bruised.

The next witness called to testify is Bob Ewell, Mayella's father. The prosecution has him recount his side of the story. The critical part of testimony comes during Atticus' cross-examination. He asks Ewell if he agrees with Sheriff Tate's description of Mayella's injuries. Bob answers that he does. Atticus then asks Bob to write his name for the court. Bob writes his name with his left hand. Atticus is trying to prove that it was actually Bob that hit his daughter, not Tom. If Mayella was bruised on her right side, then it would have to have come from a left-handed punch.

Jem is excited, thinking his father has gotten the evidence he needs to prove Tom's innocence. Scout knows what her father is doing, as she recognizes that Atticus is trying to prove that Bob could have beaten Mayella. Despite the evidence, she doesn't share Jem's enthusiasm, thinking that Bob being left handed doesn't prove anything, because Tom could be as well. What Scout doesn't yet know is that Tom's left hand was severely crippled in his youth by an accident with a cotton gin. He couldn't have hit Mayella with it.

In chapter 17 of To Kill a Mockingbird, Bob Ewell represents the white supremacy of Maycomb. Scout describes him as dirty, poor, and uneducated. She says that houses in the Black neighborhood are more well-maintained than the Ewells'. Despite that, Bob comes into the courtroom with an air of superiority. He acts proud because even though he is considered a lowly nobody in Maycomb, he still has power over Tom Robinson. The society of the south in the 1930s elevates the lowliest white man above any Black person. Bob tries to use this to garner sympathy with the jury when he theatrically accuses Tom of raping his daughter. The judge recognizes what Bob is doing and asks him to knock it off.

To Kill a Mockingbird Chapter 17 Quotes

The following is a list of important To Kill a Mockingbird chapter 17 quotes.

This quote comes from Sheriff Tate, describing to the prosecution the state in which he found Mayella.

This quote is an exchange between Atticus and Sheriff Tate, where Atticus is asking Tate to describe which eye was bruised. This is a critical part of the case Atticus is building.

This quote is Scout's inner monologue. She is explaining why she doubts the case her father is building.

Chapter 17 of To Kill a Mockingbird covers the first two witnesses called in the trial of Tom Robinson. The first witness called is Sheriff Heck Tate. The prosecution asks him to give his account of the night of November 21. He says that Bob Ewell, Mayella's father, called him to come to the house. When the Sheriff arrived, he found Mayella beaten and bruised. During Atticus's cross-examination of Sheriff Tate he asks Tate to describe Mayella's injuries. Sheriff Tate says that her eye was black, and in response Atticus asks him which eye. Tate says it was her right eye.

The next witness is Bob Ewell. After the prosecution has Bob tell his account, Atticus performs his cross-examination. He asks Bob to write his name for the court. Atticus does this to prove that Bob is left handed. Jem is excited by the revelation, thinking his father has gotten the evidence he needs to prove Tom's innocence. If Mayella had a bruise on her right eye, it would have come from a left-handed punch. Scout is skeptical; she isn't sure this proves anything, because Tom Robinson could have hit Mayella with his left hand.

Why is Scout nervous at the end of Chapter 17?

Scout is nervous because she isn't sure her father's argument will be enough to prove Tom's innocence. She thinks that it could still be supposed that Tom hit Mayella with his own left hand.

What characters are in Chapter 17 of To Kill a Mockingbird?

What is the conflict in To Kill a Mockingbird Chapter 17?

The conflict in chapter 17 of to Kill a Mockingbird is the trial of Tom Robinson. In larger sense the conflict could be described as Atticus against the white supremacy in Maycomb.

Where does Chapter 17 open in To Kill a Mockingbird?

Chapter 17 of To Kill a Mockingbird opens in the Maycomb courtroom. It is the beginning of the trial of Tom Robinson.

To Kill a Mockingbird by Harper Lee: Ch. 22 | Summary & Analysis

To Kill a Mockingbird Chapter 29 Summary

To Kill a Mockingbird by Harper Lee: Chapter 12 | Summary & Quotes

To Kill a Mockingbird Project Ideas

To Kill a Mockingbird Chapter 25 Summary

To Kill a Mockingbird Chapter 1 Questions

Examples of Foreshadowing in To Kill a Mockingbird

Jim Crow Laws in To Kill a Mockingbird

Literary Devices in To Kill a Mockingbird: Allusions & Irony

Calpurnia in To Kill a Mockingbird | Character, Quotes & Traits

Hyperbole in To Kill a Mockingbird

Jem Finch in To Kill a Mockingbird by Harper Lee | Analysis, Traits & Quotes