Copyright
Jessica Holmes, Christina Boggs
Learn about the Act of Toleration of 1649 and its impact on religion in Colonial Maryland. Explore why it was created, which religions were impacted, and why its legacy is important and relevant today. Updated: 11/22/2021

Introduction to the Maryland Toleration Act of 1649

The separation of church and state is a political concept that grew from religious discourse throughout history. When settlers arrived in the New World to settle the colonies, some religious groups were seeking safety from the religious rule and persecution of the English monarchy. Maryland was the first colony to address the concept of separation of church and state when it passed the Act of Toleration in 1649, also known as the Maryland Toleration Act.

The Founding of Maryland

The colony of Maryland was chartered in 1632 by King Charles I. George Calvert, also known as the First Lord Baltimore, who applied for a charter to settle a colony in the New World, hoped he could create a colony that was free from religious persecution. Calvert was one of many Catholics who was seeking to flee the religious persecution from the Church of England. Lord Baltimore had plans for his colony to be a religious safe haven but also a profitable settlement, hoping to grow and harvest tobacco in the New World. Lord Baltimore died in 1632 before the charter was granted, but King Charles I granted the colony charter to the first son of Lord Baltimore, Cecilius Calvert, who became the new Lord Baltimore. Maryland was named after King Charles I wife, Henrietta Marie, and in spring 1632, the son of Cecilius, Leonard Calvert, arrived at the colony with 300 settlers. The colonists settled in St. Mary's, and Leonard Calvert was named the first governor of the colony of Maryland. One of the most unique characteristics about the Maryland colony was that in the charter granted by King Charles I, the Calvert family was given both the right to establish a colony in Maryland and ownership of the land that they settled. This unique position established Maryland as the first colony to grant freedom of religion to all persons and would set the precedence for freedom of religion in the New World.

Maryland became a melting pot of religions during this time, becoming home to several Catholics, Protestants, and Puritans. As the colony population increased, lured by the promise of religious freedom, Catholics became the predominant group in the area. Maryland attracted a variety of faiths because many desired a life that was free from religious oversight. While these different religious groups are all considered Christian, they do not necessarily share the same beliefs or follow the same practices. For example, Catholics followed the teachings and traditions of the Roman Catholic Church and did not believe that the Bible was the only religious authority, often following the direction and leadership of the Pope. In the contrary, Protestants believed in the teachings of Jesus and closely followed the Bible. The word protestant is derived from ''protest.'' Protestants are those who protested against the teaching of the Catholic church. Lastly, the Puritans, also known as Anglicans, were a subgroup of Protestants, who followed the Church of England which was created by King Henry VIII. The Church of England was created when King Henry VIII wanted to divorce his wife. He was unable to do this because Catholic law did not support divorce. King Henry VIII created The Church of England which he based on Catholicism, but he changed many religious practices including the expectation to convert to Anglicanism. This religious turmoil led to an exodus of Catholics, Protestants, and Puritans who did not want to convert to the Church of England and decided to help settle the colony of Maryland as it offered freedom of religion. These religious groups lived, worked, and settled Maryland with relatively few disputes for many years, even sharing the same chapel for worship. That is until the English Civil War began in 1642 and religious discourse began to unravel as colonists feared they would lose control of the colony and therefore lose the ability to practice religion freely.

The English Civil War, beginning in 1642, resulted from a long-standing history of religious and political oppression in England. The war was nearly a decade long battle between King Charles I and his Royalist party, and the Parliamentarians, over the governing structure of England and issues concerning freedom of religion. In 1649, King Charles I was executed for treason, accused of abusing his power as King. This event led the Maryland colonists to fear that the religious freedom they had been able to enjoy since 1632, was at stake. King Charles had granted the charter and now that he was no longer King, the colonists feared they would lose the freedoms they had been granted. Furthermore, the colony leaders, both Catholic and Protestant, feared that one group might attempt to establish religious law and take control of the colony. As a result, the Maryland Assembly (the governing body of Maryland) passed the Act of Toleration in 1649, which gave colonists the freedom of religion within the Christian faith. 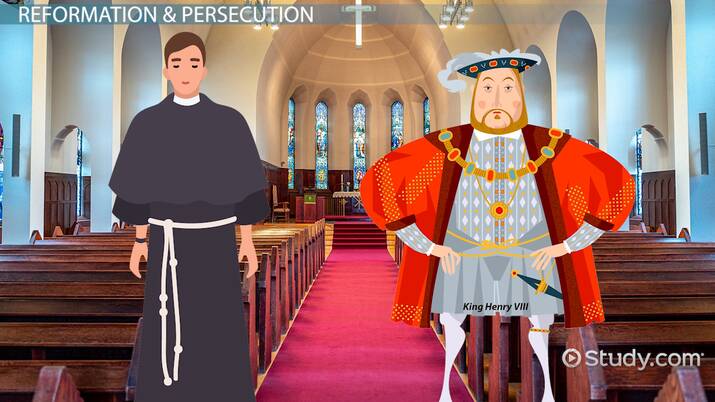 Coming up next: President Jefferson's Election and Jeffersonian Democracy

Enactment of the Act of Toleration in Maryland

When Leonard Calvert died, Lord Baltimore appointed a founding colonist, William Stone, to serve as the next governor. Stone was also a devout Catholic and the move was done to secure Maryland as a safe haven for Catholics. Cecil Calvert proposed a new law and asked that Stone and the Maryland Assembly vote on it. In April 1649, the Maryland Assembly gathered in the colony capital of St. Mary's. Here, the Assembly voted to pass twelve legislative acts and the most notably passed was ''An Act Concerning Religion'' which became the Act of Toleration in 1649.

Key Points in the Toleration Act

The Maryland Toleration Act was not a blanket permission to practice any religion. There were many limitations and stipulations that were included in the act, including limiting acceptable religions to practice, outlining punishments and fines for breaking law, and giving the Assembly the right to withdraw the religious tolerance at any time.

The Act of Toleration of 1649 did the following:

It is important to note that the act did not protect religions outside of the Christian faith, including Native American worship, Judaism, and those who did not claim faith in the Trinity of Christianity (the Father, the Son, and the Holy Spirit). The act only protected those who worshipped within the tolerable or allowed religions. Various religious groups did not agree with the act because they thought it was too favorable towards the Catholics. The act lasted only five years before it was repealed in 1654.

What Was the Purpose of the Toleration Act of 1649, and What Did it Accomplish?

In 1652, following the execution of King Charles I, Parliament sent two Protestant commissioners to St. Mary's, and Protestants took control of Maryland. By 1654, the Protestant commissioners had repealed the Act of Toleration and declared Catholicism illegal in the colony. Soon, Lord Baltimore made a deal with the Protestants and regained control of the colony. By 1657, the Act of Toleration was reinstated until 1692. The act remained in place until the end of Queen Mary II rule in the 1690s. When her reign ended, the Church of England became the official religion in England and the New World colonies. Maryland would not regain its freedom of religion until the American Revolution almost 100 years later.

The Legacy of the Act of Toleration of 1649

The Act of Toleration of 1649 was not a permanent act, and it was repealed twice, but the act became a legacy piece of legislation during colonial America. ''An Act Concerning Religion'' was the first appearance of the concept of church and state in the New World. This concept was discussed in depth by philosophers of the time. In 1689, John Locke, who inspired many of the ideas for democracy, wrote 'A Letter Concerning Toleration' in which he argued in favor of the separation of church and state. Locke argued that people have the inherent right to think freely and therefore could follow any spirituality they desire and should not be forced to convert to religions of others, nor should it be allowed to rule over civic duty. Although it did not provide freedoms of all religions, the Act of Toleration of 1649 is the foundation on which this concept was established. Over 100 years later, this concept was incorporated into the Constitution via the Bill of Rights. The freedom of religion and separation of church and state was so important to the foundation of American Democracy, that senators had originally proposed it to be in its own amendment altogether. However, the amendment was revised to be included in the First Amendment which grants a variety of freedoms such as freedom of speech, religion, and peaceful assembly, among others.

The Maryland Toleration Act also called "An Act Concerning Religion" was a legislative act passed in 1649 which granted freedom of religion to colony settlers. Many Catholic, Protestant, and Puritan settlers came to the colony of Maryland in the 1600s to escape religious persecution, especially from the Church of England. The colony, founded by Lord Baltimore and chartered by King Charles I, was the first colony in the New World to afford the freedom of religion. When King Charles I was executed, colonists feared Protestant conversion and losing their freedom of religion. In an attempt to avoid conversion, the Maryland Assembly passed the Act of Toleration, which allowed them to practice any religion in the Christian faith. The act was repealed twice, first in 1655 and again in 1692. The Act of Toleration of 1649, along with the philosophical debates of John Locke, established the concept of the separation of church and state, which became a pillar in the foundation of American Democracy, and this concept was later incorporated into the Declaration of Independence.

What was the main idea of the Toleration Act?

The main purpose of the Toleration Act of 1649 was to afford the freedom of religion to colonists. This act only accepted religions within the Christian faith.

Why was the Maryland Toleration Act significant and what were its limitations?

The Maryland Toleration Act was significant because it is the first instance of the separation of church and state found in colonial America. The act had limitations including only tolerating religions in the Christian faith and being able to revoke the freedom of religion at any time.

Act of Toleration 1649 History | What was the Purpose of the Toleration Act of 1649?
Related Study Materials

The Impending Crisis of the South: Summary & Analysis