What is a Trabecula?

Trabecula, in general, is the descriptive name for the structure and function of some tissues. Trabecula tissue can be made of columns of connective tissues or bundles of fibers that create a web-like structure. Trabecula can be found in animals and even be seen in plant tissues. Furthermore, the plural word for this structure of tissue is trabeculae. The definition of trabeculae is an interwoven network of connective tissue that separates or divides a cavity or organ. The word trabecula comes from the Latin word "trabes" meaning beam or timber. The medical community adapted the use of this word because the trabeculae support other tissues and organs in the same way a beam supports the structure of a building. 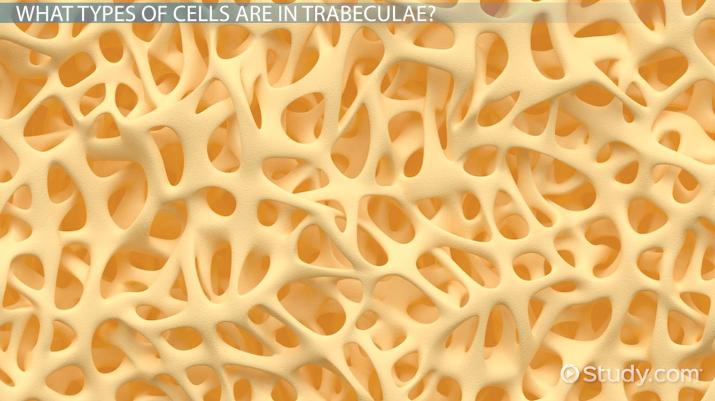 Where are Trabeculae Found?

Specifically in humans, trabeculae can be found within many body systems. The spleen, for example, is an organ located between the stomach and diaphragm. Its trabeculae are a network of connective tissues that help support the organ's overall structure. Furthermore, trabecular structures can be found in the ventricles of cardiac muscle or the interior of the lower chambers of the heart. Again, their function is to provide support. Moreover, trabeculae can be found within the bones of the skeletal system. Not only does the trabeculae provide support and strength to the bones, but the areas within the network of connective tissue play an important role in blood cell production.

Many bones in the body contain two main groups of layers: cortical bone and spongy bone. Cortical bone is the outer structure of the bone that forms a protective layer around the inner portion of the bone. Spongy bone, also known as cancellous bone, can be found under cortical bone and contains bony trabeculae. The trabeculae form a network of rods and columns of tissues that give this type of bone a spongy appearance. Trabeculation of the bone occurs during the third month of fetal development. The cartilage inside the bone begins to be replaced with spongy bone through a process called ossification.

Once the body begins to produce spongy bone from cartilage, the spongy bone and trabecular tissue can be found at the end of long bones and in flat bones. Long bones are bones that have a greater length than width and include bones like the femur (thighbone) and humerus (upper arm bone). Additionally, flat bones are bones with a compressed or flattened appearance such as the sternum (breastbone), ribs and vertebrae of the spine.

Spongy bone is less dense than cortical bone, mainly due to the presence of trabecular tissue. Since the trabeculae are composed of many interwoven rods, spongy bone contains various channels and open areas. The size of these openings vary but the pattern of the web-like structure is purposefully created to withstand the stress and pressure the body exerts on the bones. The open areas in the trabeculae enable the bones to be lighter, which allows for easier body movement. It is important to note the open areas do not sacrifice the strength of the bones.

Despite spongy bone's lightweight structure, it is incredibly strong and resilient to changes in weight distribution. Just like the beams holding the framework of a skyscraper, the trabeculae support the bones. In fact, the pattern of the trabeculae can change over time as the body experiences an increase or decrease in force on the bones. For example, a marathon runner that has trained over many months will have a different appearance of their trabeculae versus someone who has a very sedentary lifestyle. Throughout the duration of one's life, the bones continue to rebuild themselves through a process called remodeling. The bone cells receive information from other parts of the body that tell them to alter the structure of the trabeculae.

On the other hand, the trabeculae can become weakened and thinned. For example, astronauts who travel into space put less force on their bones than those on Earth's surface due to the change in gravity. Less gravitational pull on the body means the bones are withstanding less force and stress. In order to combat the weakening of the bones, astronauts exercise on special equipment found aboard the spacecraft to continue putting some degree of exertion on their bones. Even so, after the astronaut has completed their mission and returned to Earth's surface, they must still follow a strict routine so they do not risk fracturing or injuring their weakened bone tissue.

Furthermore, the red bone marrow inside the trabeculae contain hematopoietic stem cells which have the ability to become red blood cells, white blood cells or platelets. Red blood cells help distribute nutrients to all cells in the body as well as remove waste products such as carbon dioxide. White blood cells help the body fight off pathogens that cause infections. Lastly, platelets are pieces of cells that help to clot the blood.

Other Cells in Trabeculae

Though there are many cells in the bones of the skeletal system, three important types of bone cells can be found in the trabeculae of spongy bone. The beginning to each of these three bone cells all begin with "osteo," since osteon is the Greek word for bone. However, the ending to each word is different and provides meaning to the cell's specific function.

Trabecula is a scientific word used to describe the specific network of tissues that provide support to organs, tissues or cavities. Trabeculae, the plural form, can be made of bundles of fibers or an interwoven network of connective tissues. Trabeculae are found within some organs like the spleen and heart but also within some bones of the skeletal system. The outer portion of bone is called cortical bone, while the inner portion is called spongy bone or cancellous bone. The trabeculae inside the cancellous bone intentionally have many pores and thus creates a spongy appearance. Spongy bone can be found at the ends of long bones or inside flat bones such as the ribs. Additionally, the holes in the trabecular tissue are filled with red bone marrow which can produce red blood cells, white blood cells and platelets.

The human body can monitor and evaluate the amount of stress and exertion that is placed on the skeletal system. In fact, when astronauts return from a space mission, the trabeculae may have become weakened due to the decrease in gravity. Fortunately, there are specific types of bone cells that can help remodel or strengthen the spongy bone. Osteocytes communicate with other cells to replace bone tissue. First, osteoclasts dissolve the old or injured bone. Then the osteoblasts work together to create new bone tissue. One excellent way to support healthy bones is to exercise regularly so the trabeculae remain strong.

What is the difference between cortical bone and trabecular bone?

The outside of the bones is made up cortical bone while the inside is made of spongy bone or cancellous bone. The spongy bone is made up of supporting tissues called trabecular bone.

What is the function of trabecular bone?

Trabecular bone is found inside spongy or cancellous bone. The trabeculae act like a network of supporting beams to provide strength and support to the bones.

What are Trabeculae in bone?

Trabeculae in bone are made up of columns and rows of connective tissues that form a web-like appearance. Red bone marrow fills in the holes in the trabeculae.

Trabeculae Bone Function | What Is a Trabecula?
Related Study Materials

Aponeurosis Overview & Function | What is Aponeurosis?

Joint Movement & Structures | What are the 3 Types of Joints?

Ankylosis in the Joints | What is Ankylosis?

Periosteum of Bone Function & Location | What Does the Periosteum Do?