Copyright
Amanda Ferguson, Adam Richards
Where was the Trail of Tears? Learn the facts about the Trail of Tears, and the historical significance of Indian tribes forcibly removed from their lands. Updated: 09/25/2021

What was the Trail of Tears?

The Trail of Tears refers to the removal of Native American tribes from the southeastern U.S., primarily from Florida, Alabama, North Carolina, Tennessee, and Georgia. Around 125,000 Natives lived in this region at the start of the 1830s. By 1840, virtually all Natives in the Southeast U.S. were gone due to forced removal by the U.S. government, under the direction of President Andrew Jackson and the Indian Removal Act of 1830. The Five Civilized Tribes (named due to relative cooperation with U.S., cultural elements of each, etc.) of the Southeast: the Choctaw, Chickasaw, Creek, Seminole, and Cherokee, were directly affected by the removal.

Since the Louisiana Purchase of 1803, which doubled the size of the U.S., settlers had been encroaching closer and closer to Native territory. Pressure to take action on the Native land issue had been mounting in the U.S. government since Thomas Jefferson's presidency. Justification for forced removal of the tribes came from American settlers' desire to use Native land for farming; the soil was perfect for cotton production and could yield great wealth for its farmers. Affected tribes were led to designated Indian territory in the modern-day state of Oklahoma via the Indian Removal Act.

25 million acres of land were gained, for mostly white settlers, from the removal. An estimated number of around 100,000 Natives were forced to relocate during the 1830s, with thousands perished along the difficult journey to their new lands.

Prior to the Indian Removal Act, and Trail of Tears, American leaders had faced the difficult question of how to interact with the Native population. The Five Civilized Tribes, along with many others, had made efforts to assimilate to Euro-American culture in efforts to sustain peaceful relationships with the U.S. George Washington believed Natives should assimilate, by learning English, converting to Christianity, and overall adopting the Euro-American way of life. Thomas Jefferson's ideas for the Natives involved trade plans that would leave Natives indebted to the U.S. government; then, to pay off the debts, the government would encourage Natives to trade their land for new lands out west. Ultimately, many leaders in the U.S. government favored relocation of Natives, but a decent number of Americans and politicians opposed Indian removal, as well.

Most Native groups were opposed to relocation and often engaged in battles and/or disagreements with white settlers in their respective regions. White settlers desired Native land for farming and settlement; Native land in the Southeast U.S. was very fertile and ideal for the cash crop of cotton. The popular belief of Manifest Destiny was ripe in the minds of many Americans at the time and influenced beliefs on Native relocation.

The Indian Removal Act was signed into law on May 28th, 1830 by President Andrew Jackson. Many legislators, such as Henry Clay, David Crockett, and Daniel Webster openly opposed Removal Act, and caused some heated arguments in Congress. Ultimately, the Act allowed the U.S. government to engage in treaties with Native tribes that would result in their relocation to lands west of the Mississippi River. Jackson was elected president in 1828 but had long promoted Native relocation prior to his presidency and the Act's passage. In practice, Jackson asserted that tribes would enter treaties voluntarily, but if they refused, there would be great consequence and penalty (forced removal, subject to state law/prosecution, etc.). Jackson did not adhere to the peaceful negotiation of treaties wording from the actual Act. In his 1829 State of the Union Address, Jackson did not speak favorably of the Natives. He made his argument about the U.S. right to Native lands, and further warned of disaster should the Native refuse to relocate/do what is asked of them.

Ultimately the Trail of Tears was significant because it effectively removed most of the Natives/Indian population from the American Southeast, forever changing the cultural landscape of the region. Thousands of Native lives were lost in the process, and precedent was set for dealings with Native populations for the future. In addition, multiple Indian reservations were established west of the Mississippi River during this time period.

When Did the Trail of Tears Start?

The Trail of Tears began in the 1830s and would continue into the 1850s. Indian relocation and/or removal had occurred since the coming of settlers to North America, but the removal during the Trail of Tears was a large-scale, government-sanctioned series of events.

Timeline of Indian removal prior to 1838, and beyond: 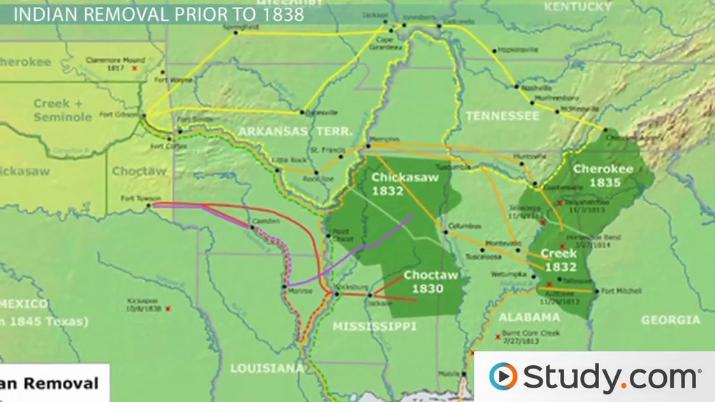 Coming up next: Women in Puritan Society: Roles & Rights

The Seminole, Creek, and Cherokee all engaged in some type of rebellion or resistance against relocation. The Trail of Tears itself is most often associated with removal of the Cherokee Natives, in particular. The Cherokee journeyed along the trail from 1838-1839, and lost 1/4 of their population in the process. Cherokees had long assimilated to European-American culture prior to removal, but white settlers still wanted them gone from the Southeastern U.S. in order to pursue their own interests. Settlers/U.S. citizens believed Cherokee lands were too profitable, especially after gold was discovered on their territory.

The state of Georgia took over Cherokee territory after the Indian Removal Act was set in motion, annulling the Cherokee Nation's laws. Georgia distributed land plots to white settlers via a lottery system. Leaders of the Cherokee Nation went to the US Supreme Court with their case against the tribe's removal. Chief Justice John Marshall first ruled that the Cherokee were not U.S. citizens before the Court. In a second ruling (Worcester vs. Georgia), Marshall agreed that the state of Georgia did not have authority over the sovereign Cherokee Nation and that they could not forcibly remove its people (1832). President Jackson did not interfere with Georgia's actions, even after Supreme Court ruling. A small group of Cherokee (Removal Party or Treaty Party) reached an agreement with some U.S. representatives in 1835, but the Cherokee chief denied the agreement because the small group did not properly consult the nation as a whole. The U.S. Senate still ratified the deal made between its representatives and the Removal Party. Between 1837-1838, under President Martin Van Buren, the Cherokee were rounded up under direction of General Winfield Scott, and sent to detention camps, then sent on the Trail of Tears to their newly designated land in Oklahoma.

The Five Civilized Nations and Trail of Tears statistics:

The tribes involved in the Trail of Tears included the Choctaw, Seminole, Creek, Chickasaw, and Cherokee of the Five Civilized Tribes of the Southeastern U.S. They were forcibly removed to designated Indian territory in present-day Oklahoma between the 1830s-1850s. Natives usually did not bring any of their belongings while traveling, as they were sometimes pushed into detention centers with little notice; they often just traveled with their immediate clothing and/or very little.

The Five Civilized Tribes took various routes from their ancestral homelands to their new lands in Oklahoma. Some tribes experienced longer journeys than others, and greater difficulties than others. The journey took hundreds of miles, some groups covering about 10 or so miles per day. Tribes encountered multiple difficulties whilst traveling, including disease, malnutrition, dysentery, starvation, exposure, extreme weather events, and more. Every tribe experienced death during their respective journey.

Nowadays, one can visit the Trail of Tears National Historic Park (est. 1987) stretching 5, 045 miles from Tennessee to Oklahoma. The Park pays respect to the Native groups who endured forced relocation to new lands. Visitors learn about the history behind the Trail of Tears and its tribes along the confines of the park.

The Cherokee Nation is the tribe commonly associated with the term "Trail of Tears"; Cherokee relocation was directed by General Winfield Scott. When making the journey to their new lands in the modern-day state of Oklahoma, Natives often only had the clothes on their backs or very little belongings. Thousands of Native Americans died due to extreme hardships encountered during their removal. The Trail of Tears National Historic Park, established in 1987, memorializes the struggle of Native Americans' forced relocation.

How many tribes walked the Trail of Tears?

At least five major tribes walked the Trail of Tears, including the Chickasaw, Choctaw, Creek, Seminole, and Cherokee. These tribes were known as the Five Civilized Tribes of the southeastern U.S.

What caused the Trail of Tears?

The Indian Removal Act of 1830, signed into law by President Jackson, sparked the forced relocation of Native tribes onto new lands. White settlers wanted to live on and/or farm the fertile soil of the southeastern U.S., where many of the Five Civilized Tribes lived.

How many natives died on the Trail of Tears?

Thousands of Natives died walking the Trail of Tears. Causes of death included malnutrition, starvation, exposure to extreme weather events, dysentery, and more. An estimated number of over 10,000 died en route to their designated land plots in Oklahoma.

What was the route of the Trail of Tears?

The route for the Trail of Tears varied a bit for each of the tribes, but all headed to the designated Indian territory in modern-day Oklahoma. The Five Civilized Tribes were all located in the southeastern region of the U.S.

Can you walk on the Trail of Tears?

One may walk part of the Trail of Tears, as there is now a national park dedicated to the trail, called the Trail of Tears National Historic Trail. The park covers over 5,000 miles and reaches over 9 different states.

Who participated in the Trail of Tears?

The Five Civilized Nations comprised of the Seminole, Creek, Choctaw, Chickasaw, and Cherokee were involved in the Trail of Tears. These five tribes were forcibly relocated to new lands west of the Mississippi River, to the modern-day state of Oklahoma. The Trail of Tears lasted between the 1830s-1850s.

The Trail of Tears and Jackson's Indian Removal Act of 1830