What is Transferred Intent?

The doctrine of transferred intent is an important, and common-sensical, legal principle. It states that when a person attempts to harm someone and instead harms a completely different person, they may be held liable for intending to commit a crime. In other words, if Sam tries to punch Joe but misses, hitting Ray instead, Sam can be held liable for hitting Ray, even though she didn't "intend" to hit Ray.

Transferred intent is a doctrine in the law of torts, as well as in criminal law. A tort is either an act, or a failure to act, that results in injury or harm to a person. Tort law is a branch of civil law, not a branch of criminal law. This means that people found guilty in tort law aren't sent to jail. Instead, they are ordered to repair the harm they have done in some way. Usually, this means that they must pay money to those they have harmed. In criminal law courts, guilty persons are punished and may be sentenced to prison.

There are different kinds of torts. Negligent torts concern harms caused by people failing to show a reasonable standard of care. Oftentimes, accidents are caused by negligence. In intentional torts, on the other hand, the harm has been caused by willful misconduct. Finally, in liability torts, willfulness and negligence are irrelevant. All that matters is the actual damage that has been done.

Transferred intent is a doctrine that applies to intentional torts. In legal jargon, the intent is said to "transfer" from the intended tort to the injury that resulted from the act. In the example above, Sam's intent transfers from the person of Joe to the person of Ray.

Transferred intent also applies to situations in which a person intends to commit a tort against someone, but in the course of implementing their plan, they commit a different tort. Altering the previous example: Sam means to hit Joe with a baseball bat, but she swings and misses. However, in the course of missing, she loses her footing, spins, and hits Ray in the head with her elbow. In this case, Sam cannot claim innocence because she did not "intend" to hit Ray with her elbow. The intent of her original act transfers to the actually committed act.

The doctrine of transferred intent is important because it allows the victims of crimes to seek justice, even if the offender did not intend the crime to affect them.

It's also important to note that the doctrine of transferred intent helps to ensure that people are held to account for the full severity of their intentions. For example, Sam might choose to throw a brick at Joe, hoping to hit him in the head. However, say that Sam's aim is off, and her brick crashes through the windshield of Joe's car, instead. Without the doctrine of transferred intent, Sam might be tried for malicious injury to property. However, that is a far less serious charge than assault or even attempted murder, which may be appropriate in a case where someone throws a brick at someone else.

The doctrine of transferred intent applies to five torts. These are: 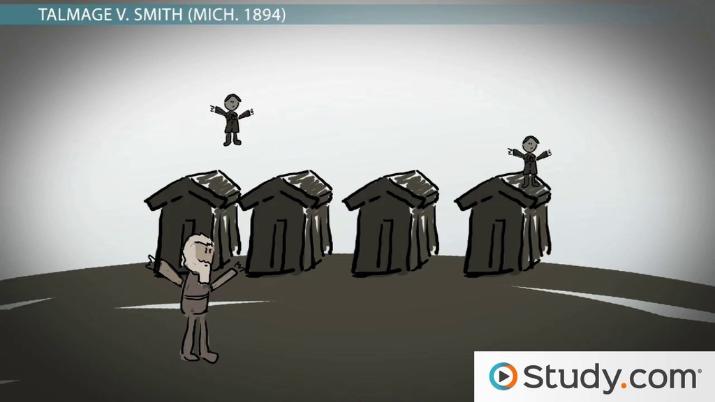 Try it now
Back
Coming up next: Intentional Infliction of Emotional Distress: Definition and Examples

Perhaps the most significant case in which the transferred intent doctrine played a large role was Talmage v. Smith, which was heard in Michigan in 1894. The case concerned an injury that occurred when Charles Smith saw two neighborhood boys atop one of his sheds. He asked the boys to climb down from the shed, and they started to get down right away. However, without giving them enough time to dismount, Smith threw a stick at them.

The stick didn't hit either of the two boys that Smith was aiming for. However, it did hit a third boy, the son of George Talmage, just above his eye. The stick was two inches wide and 16 inches long, and it was thrown hard. The boy went blind in one eye as a result of the impact.

Talmage took Smith to court over the injury, claiming that he had a responsibility to pay damages for blinding his son. Smith, however, argued that he did not actually intend to hit the boys, and was merely trying to scare them. Moreover, he did not even know that the Talmage boy was present.

Even though Talmage and Smith came to an agreement among themselves, the case went to trial. The jury found that Talmage was using "unreasonable and excessive" force, and thus, that he was liable for blinding the Talmage boy, even though he did not "intend" to hit him. This makes Talmage v. Smith the classic case of transferred liability for battery.

The doctrine of transferred intent applies in the law of torts, a branch of civil law meant to redress harms. It may apply to five torts: assault, battery, false imprisonment, trespass to land, and trespass to chattels, or personal property. In transferred intent, person A may be held liable for harming person B, even if they had meant to harm person C. Also, if person A intends to commit tort 1, but actually commits tort 2, their intent may transfer to tort 2.

The doctrine of transferred intent ensures that people can seek redress for harms they suffer, even if the offender intended to harm someone else. It also ensures that offenders are held responsible for the appropriate severity of the harm they commit. For example, in the landmark case Talmage v. Smith, the outcome was based on the doctrine of transferred liability for battery.

What is an example of transferred intent?

If Sam tries to punch Joe but hits Ray instead, her intent will transfer from Joe to Ray. Transferred intent lay behind the legal case of Talmage v. Smith.

Why is the doctrine of transferred intent important?

The doctrine of transferred intent is important because it ensures that people can seek redress for harms they suffer. It also ensures that offenders are charged with the appropriate severity of the torts they commit.

Does transferred intent apply to property?

Rights of Assignee, Assignor & Obligor | What is Assignment in Law?

Before the Law by Franz Kafka | Summary, Themes & Analysis

Rights of Assignee, Assignor & Obligor | What is Assignment in Law?

Before the Law by Franz Kafka | Summary, Themes & Analysis