Copyright
Andrea Murphy, Mary Ellen Ellis
Learn about the transform fault and understand how and where it forms. Explore the plate boundary definition, and read about types and examples of transform faults. Updated: 05/22/2022

What is a Transform Fault?

Rather than a break in the Earth's crust, a fault is a distortion in the crust caused by the movement of tectonic plates. It allows the rocks to move relative to each other. A transform fault is a specific type of strike-slip fault identified by a horizontal break in the rock connecting two tectonic plates. Similar to a transform boundary, a transform fault is located where the blocks of rocks scrape past each other horizontally, connecting tectonic plates. They are considered to be conservative boundaries because the crust of the Earth is not created or destroyed. Transform faults may be as small as a few millimeters in length or can be as large as thousands of kilometers. It can connect mid-ocean ridges and other plate boundaries, making a zig-zag pattern.

The thin layer that covers the Earth is called the crust. The Earth's crust is not one solid piece; it is broken into several parts known as tectonic plates. A boundary is where tectonic plates meet. These tectonic plates are in constant movement, and their motion relative to each other determines the activity found at that boundary and identifies the type of boundary. A boundary between tectonic plates can be convergent, divergent, or transform.

A transform boundary is area where the two plates scrape past each other horizontally, and no crust is created and destroyed, making it a conservative boundary. The movement at transform boundaries will cause intense earthquakes and provide a geologic record of the Earth's crust. A transform fault will form between tectonic plates where each plate moves away from the divergent plate boundary.

The earthquakes that occur at boundaries cause stress through the crust of the Earth; rocks at the surface will break in response to the stress-forming faults. Transform boundaries are considered faults, but not all faults are plate boundaries as they can be found throughout the tectonic plate, away from the plate boundary. In a thicker crust, faults can be created by the rise and fall of hot magma in the Earth's mantle, causing the overlying crust to expand. The expansion of the crust can cause cracks and movement in the rock, creating a fault line. 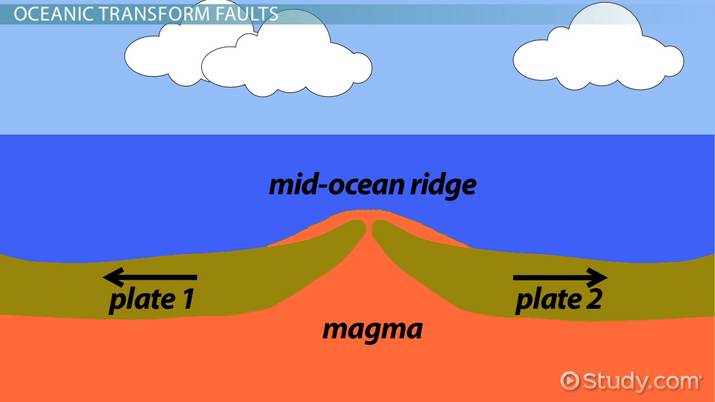 Try it now
Back
Coming up next: What is Ore? - Definition, Types, Uses & Examples

Beneath the ocean, new crust is created at divergent boundaries. As the plates pull away from each other, the hot magma from the mantle rises to fill the space between the plates. The magma cools and solidifies, forming a new oceanic crust. At these divergent boundaries, mid-ocean ridges are formed from the plates being pulled apart. A mid-ocean ridge is a mountain range that rises from the ocean floor. The largest mid-ocean ridge is the Mid-Atlantic Ridge extending from the Arctic, running down the middle of the Atlantic Ocean down past the tip of Africa.

This divergent boundary between plates is not a straight line. In between portions of the plates that diverge from each other, there are areas where the crust scrape past each other in opposite directions, creating a transform boundary. In these areas, no new crust is formed and destroyed. These areas are considered to be a weak portion of the crust, producing fewer and smaller earthquakes than areas with a stronger crust.

A divergent boundary is formed between two continental plates that create a rift valley by pulling them apart from each other. When the plates separate, a flat and low-lying valley will form between the two plates at the point of separation. The movement of the plates as they diverge apart causes earthquakes. Rift valleys can also form where there are transform faults. As the plates scrape past each other, the rocks in the crust may compress, creating a narrow rift.

The Alpine Fault found along New Zealand's coast and the North Anatolian Fault in Turkey are other active strike-slip transform faults. Continental transform faults are more noticed than oceanic transform faults because people experience earthquakes that they directly cause. Since the crust is not smooth, the plates experience friction as they move. Occasionally, the plates get caught on each other and will get locked in place. The point where the plates are locked together will build up pressure from the constant motion of the plates. Eventually, the pressure will be so great that the plates will snap, releasing the built-up energy and jolt past each other, shaking the land around it. People who live along these fault lines experience the energy travel through the crust away from the epicenter, or origin of the earthquake, like waves that vibrate the ground.

What is an example of a transform fault?

A transform fault is a strike-slip fault that connects two tectonic plates moving in opposite directions away from a divergent boundary. Examples include San Andres Fault, Alpine Fault, and North Anatolian Fault.

What happens in a transform fault?

A transform fault is formed by two tectonic plates moving horizontally in opposite directions away from a divergent boundary. There is a lot of friction between the plates as they move against each other. Since the crust is rough, it will get stuck and build up pressure. Once the pressure becomes too great, the energy will be released, resulting in an earthquake.

What are two types of transform faults?

Try it now
Back
Create an account
Transform Fault Boundaries & Examples | What is a Transform Fault?
Start today. Try it now
Introduction to Physical Geology: Help and Review