Copyright
Laura Lohman, Alisha Nypaver
Learn the definition of tremolo in music, discover the tremolo strings and notation, understand the tremolo effect, and examine its difference from vibrato. Updated: 12/09/2021

Tremolo is a music performance technique in which a performer plays an individual note or two alternating notes as fast as possible. Tremolo is an Italian term that means "trembling," and it captures the trembling and quivering sound created by the fast repetition of one or two notes.

The tremolo technique was used in European music from the 17th century. It was used by vocalists, string players, and composers such as Claudio Monteverdi. It was commonly notated and performed as a measured tremolo. In a measured tremolo, the performer repeated the note in a rhythmically precise way based on the subdivision of the beat. For example, the performer could play the note 4, 8, or 16 times per beat. Sometimes, the intended subdivision of the measured tremolo would be written precisely in the music notation.

By the late 19th century, the unmeasured tremolo had emerged as the typical way to perform a tremolo. The performer simply repeated the note as quickly as possible. The performer did not need to keep the rhythm even as a precise subdivision of the beat. The duration of the entire tremolo was indicated in the music notation, but the individual repetitions themselves were usually not written out in a precise subdivision.

Tremolos can create a subtle, shimmering sound or intense drama. The effect depends on the volume, or the softness or loudness, of the tremolo. The effect also depends on the number of musicians playing the tremolo at one time. For example, an entire section of violinists playing a tremolo loudly can create tension that foreshadows a disastrous event in music for an opera or film.

Tremolo is most commonly performed on string instruments. More specifically, the bowed-string instruments like the violin, viola, cello, and double bass most often perform tremolos. These are the easiest instruments for performing the unmeasured tremolo that became common in the 19th century.

Other string instruments can also play tremolos. Harp and guitar players, for example, can rapidly repeat pitches. On the classical guitar, one note can be rapidly repeated by striking a string with several fingers in alternation. On a harp, two strings are played in rapid alternation to create a tremolo.

The notation of tremolo has changed over time. In the 17th century, tremolo was often notated with a wavy line above or below the notes. Later, dots were also used to indicate the intended subdivision of the beat that should be used to perform a measured tremolo.

In some compositions, such as teaching or study compositions called etudes, the tremolo was written out and the exact subdivision was notated. 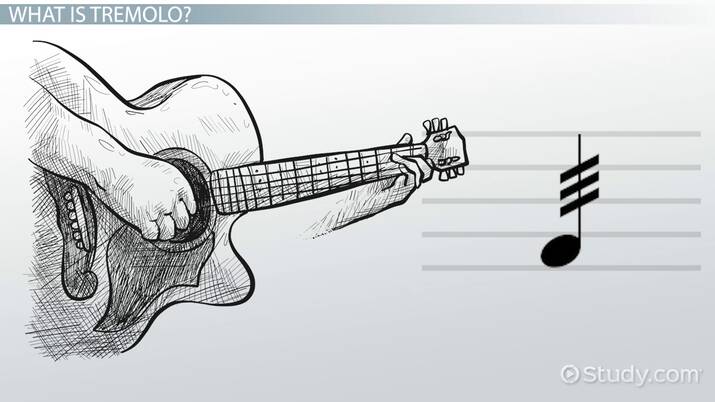 When the tremolo is a rapid alternation between two notes, it is notated as:

Vibrato is a much more subtle variation or fluctuation in the pitch, or frequency, of one note. Unlike tremolo, vibrato is not notated in music. Vibrato is a natural occurrence in singing and is often used in some wind instruments, such as the flute. It is also used on string instruments and is created by rocking the finger of the left hand on the string. While the composer determines and notates which notes should be performed with the tremolo technique, the performer decides when and how to use vibrato to add an expressive quality to phrases in the music.

Tremolo dates from the 17th century in European music. At that time, the tremolo technique was used by vocalists, string players, and composers such as Claudio Monteverdi. It was commonly performed as a measured tremolo, in which the performer repeated the note in a rhythmically precise way based on the subdivision of the beat. Later in the 19th century, the unmeasured tremolo became common. The performer simply repeated the note as quickly as possible. The performer did not need to keep the rhythm even as a precise subdivision of the beat. A tremolo can be notated as three diagonal strokes across the stem of a note, three diagonal strokes directly above a note with no stem, and three bars connecting or floating between the note stems of two notes.

How does a tremolo work?

What does tremolo mean in music?

Tremolo is an Italian term that means "trembling," which captures the trembling and quivering sounds created by the fast repetition of one or two notes.

Transposition in Music Theory | How to Transpose in Music