Copyright
Sandeep Dagar, Kat Kadian-Baumeyer
The lesson defines Trespass and Nuisance and provides elaborate examples of both concepts. It depicts the elements of Trespass and the definition of conversion. Updated: 03/04/2022

Trespassing is the act of forcefully entering the property of another person without permission where the offender knowingly violates another person's right to property and fulfills the Elements of Trespass. According to tort law, a property owner can recover actual damages or get compensation in the form of relief for loss sustained due to trespass. The two torts of trespass are:

The person trespassing in some other's property in any form is liable to pay for the injunction and damages to the rightful owner of the property. The property owner can claim the remedy for the torts of trespass through the court as the offense falls under the elements of trespass.

Any intentional activity on some other's property amounts to trespass. As per the trespass definition, some elements distinguish trespass from normal activity. The torts of trespass showcase intentional trespassing to land, forceful or unlawful entry without any permission or legal occupancy of the property, and refusal to vacate the property. Any person who intentionally or unintentionally possesses someone else's property or belongings shall be charged with trespass to chattel.

Trespass is a broad concept that can be understood through illustrations. Here are a few examples to clarify the concept.

Mac went on vacation for a few days with his friend in the countryside. When he returned, he saw a man sawing a few planks of wood in his garden. He asked the man to leave the property, but he did not listen and kept sawing. As per the trespass definition, Mac can accuse him of trespassing on his property.

Jenny moved to the city for her job. Her family also shifted with her, and they left their countryside property unattended. After a year when she came back, she was surprised to see a few men living there who accused her of barging into their property. After cross-checking the documents, the people living there apologized for the mistake of identity and vacated the property, as they had occupied her land due to confusion.

They cannot be accused of trespass, as they vacated the property without any legal or police interference.

Jack went on an outing with his friends to the amusement park, and there were other people there as well. While getting refreshment, Jack mistakenly packed the laptop of the park staff, thinking it was his own. According to the trespass definition, here Jack is liable for trespass to chattel, as a mistake of ownership is not a defense in this case.

The elements of trespass depict that if a person trespassing the property runs away with any stuff from the personal property of another person, it is referred to as trespass to chattel. It does not apply to real property or interest inland. According to the tort law, a chattel can only recover actual damages caused by the actions of the trespasser that are calculated on the diminished value and not on the actual value.

An intentional trespass to chattel involves the following elements:

Mistake of ownership is not a defense in the matters of trespass to chattel. This can shield someone in trespass to land but only if they vacate the property after reminders from the rightful owner. 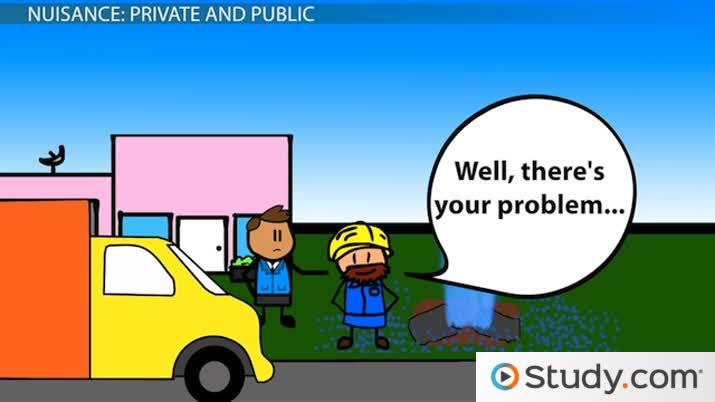 Coming up next: Defenses to Intentional Torts to Avoid Liability

However, if any such situation arises where the intrusion is caused for the greater good, such as deep digging of the road for any pipeline causing great noise at unexpected hours or any other damage, it cannot be considered nuisance.

The person causing a nuisance to an individual or a community is liable for a legal proceeding under two situations: private nuisance and public nuisance.

Private nuisance is an intrusion on the use and enjoyment of a person on his land. This amounts to an interference with another person's enjoyment and not an actual invasion over his personal property, for example - making loud noises, spreading any stinky smell, etc. It may be unintentional, but any activity that causes inconvenience to some other person on his property falls under private nuisance.

Public nuisance is the intrusion of enjoyment in such a manner that it impacts the entire community. As per the nuisance definition, it is a condition affecting the rights of an entire community or neighborhood due to any act that endangers or injures the comfort, health, or safety of others, for example - any dangerous structure, obstruction to a public way, illegal dumping, dumping in waterways, etc.

The torts of private and public nuisance have basic differences that keep them apart, and anyone can distinguish whether the nuisance is private or public. They can differentiate between them as such:

The nuisance definition suggests that the affected person can seek legal assistance only if he fulfills the parameters of the private nuisance tort or public nuisance tort.

You can understand more about the torts of private and public nuisance through the following examples.

Private nuisance refers to the nuisance caused by someone that disturbs the personal space of any individual, for example:

Public nuisance refers to nuisance on a large scale, i.e., any such activity that causes inconvenience or injures people; for example:

The tort of conversion says that it is a voluntary act committed against goods involving intentional interference and damage. It is a fancy word for stealing, where the person interferes with another person's goods without any prior permission or approval.

As per the conversion legal definition, the person committing the tort claims ownership and sells, lends, or uses the goods of another person without any legal right or in a manner inconsistent with the owner's rights. As a consequence, the person committing conversion shall be held accountable for legal action against him and pay a fine or face legal consequences as decided by law.

Elements of the tort of conversion comprise the goods and commodities of the owner and not real estate property. Any unlawful use of the goods without prior permission of the owner, or any illegal possession of any other person's goods, whether intentional or unintentional, is defined as conversion.

A tricky situation may also arise such as, someone may find a good deal on a car, bike, phone, or any other property through online advertisement or any other means, and, thinking it is a golden opportunity to grab the best deal, they buy that property at a suitable price. However, soon the police track them down with that property in their possession and charge them with "conversion", i.e., unlawful ownership of some other person's property, whether intentionally or unintentionally. Mere possession of some other person's property or goods also fulfills the conversion legal definition.

The following examples illustrate the tort of conversion:

The torts of trespass are further classified into trespass to land - when a person intentionally enters someone else's property unlawfully or without their prior approval and refuses to vacate, and trespass to chattel - when a person intentionally uses someone else's personal property (other than real estate) illegally or without their approval. The tort of conversion, also termed as stealing, refers to someone displaying some other person's property as their own with or without intentions.

Nuisance refers to causing inconvenience to the individual (private nuisance) through any activity. Some nuisance examples are - making noise or causing distress through activities such as illegal dumping on a large scale, gathering garbage on a large scale, etc. However, unexpected events, such as deep road digging for water supply or any other welfare purpose for the greater good of the community, are not termed as a nuisance. A public nuisance displays a disturbance to a community or a large number of people on a large scale. This includes any activity that may cause widespread injury or illness at large. A private nuisance is caused when a small number of people, and not the community, are affected by any act of an individual.

How do you identify a nuisance?

What is the legal meaning of nuisance?

What is considered as trespassing?

The trespass definition suggests that anyone entering the property of some other person without any prior approval of the owner or any legal authority and not vacating the property, even after repeated reminders, is said to commit trespassing. It shows the clear intention of occupying someone else's property without any legal rights of occupation.

What is an example of a nuisance?

According to the Nuisance definition, any illegal activity such as illegal establishments, unlicensed stores, or practitioners that interfere with public morals and any kind of obstruction causing discomfort or inconvenience to daily commuters or the people living in the neighborhood are some of the examples of a nuisance.

Contractual Liability of an Agent