Copyright
Jack Woerner, Tommi Waters
Explore the history of the Tribe of Levi. Learn about Levites in the Bible such as Aaron. Discover facts about the Levites and learn about their status today. Updated: 03/14/2022

The Tribe of Levi in the Bible: Overview

The Tribe of Levi in the Bible is part of the 12 tribes of Israel who descended from the family line of Levi, son of Jacob, also known as Israel. In the Abrahamic religions, Jacob, who was the grandson of Abraham, is seen as the patriarchal figure for many Israelites. Abrahamic religions like Islam, Christianity, and Judaism view the descendants of Jacob as an important part of their respective religion's history. Most of the history of the Levites in the Bible is covered in the Old Testament of the Bible, also known as the Torah. According to the Bible, members of the Tribe of Levi mostly served Israel in religious matters but sometimes political matters as well. They were important to Israel because they mostly oversaw the administration of cities and the maintenance of holy sites like temples. 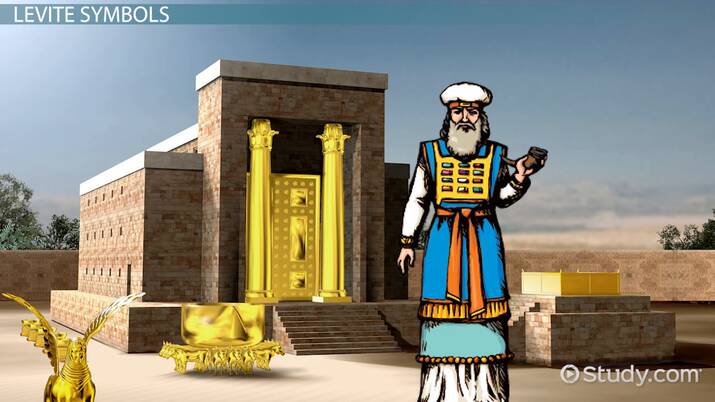 Try it now
Back
Coming up next: Tribe of Judah: History & Descendants

What Is a Levite?

Who were the Levites and why are the Levites special? A Levite is a direct descendant of Levi, but there were also certain requirements one had to meet to be classified as a Levite. The Old Testament of the Bible, also known as the Torah in Judaism, states that the original Levites were firstborn sons of the tribe. These boys grew up to be the higher-ranking priests in Israel called Kohanim. Levites wore an agate, a type of colorful stone, to signify what tribe they belonged to.

The Kohanim were an elite group from the tribe of Levi who made up the priest class. They were responsible for the leadership at the Jerusalem Temple, the Israelite building believed to contain the presence of God. The Kohanim oversaw the staff of the temple like cleaners, guards, maintenance crews, and construction workers who were lower-ranked Levites. Kohanims' other responsibilities and traits include:

Other people of the tribe who were not part of the priest class hold a variety of other roles:

History and Facts About Levites in the Bible

There are many facts about Levites in the Bible and other ancient documents. The tribe is one of 12 tribes of Israel (Jacob) that were given the land known today as Israel in exchange for their faith in God. Before settling in Israel and before the tribes were organized, the Israelites experienced many trials and triumphs throughout their history.

Israelites had built a civilization in Canaan, modern-day Israel, during the Iron Age, but it collapsed after the more powerful Assyrian Empire wiped out the strongholds of Israel. Many Israelites, including the Levites, became servants or slaves to stronger empires and civilizations around the region. According to the Torah, many Israelites were sold into slavery to the Egyptians, while other Israelites were spread throughout the Assyrian Empire.

Moses, who is a legendary Levite, was called upon by God to rescue the Israelites from Egypt. The Biblical narrative then describes the timeline of how God assists Moses in rescuing Hebrew people from captivity. When the Egyptian Pharaoh refused to release the people of Israel, God inflicted damage on Egypt with natural disasters and disease. Moses eventually is able to lead the Hebrew people out of Egypt and into the Wilderness. This event is known as the Exodus and is recorded in the second book of the Bible. Moses and the Hebrew people wander in the Wilderness for some time before Moses is said to have recorded the Torah to explain everything that happened to the Israelites. Moses also writes out the 12 commandments in which the Jewish people most live in accordance.

Ancient Israel and the Temple

Once the Israelites returned to their ancestral home of Israel, the tribes were once again reorganized. The Levite Tribe became the leaders at the Temple in Jerusalem. The high priests wore the tribe of Levi symbol that was the breastplate of judgment.

Ancient Israel After the Temple

The First Temple in ancient Israel was destroyed when the Assyrians from Babylon destroyed Israel around 580 BCE. When the Israelites returned to the Holy Land, The Levites were responsible for rebuilding the Second Temple. The Levites also established many other minor holy buildings called synagogues after the Second Temple was constructed. Synagogues are places of worship in Judaism.

The Tribe of Levi: Genealogy and Family Tree

What tribe was Aaron from? Aaron was the great-grandson of Levi and a prominent member of the Levite tribe. Aaron was also the elder brother of Moses and the Jewish high priest before and during the Exodus. The genealogy of Levites traces its roots back to the line of Aaron and Moses.

Significance and the Tribe of Levi Today

The Tribe of Levi today still plays a significant role in the Jewish religion. Most Levites today have integrated into the communities of other Jewish people and no longer have a high priest status. There are some fundamentalist or traditionalist sects of Judaism that still hold Levites in high regard in religious or ceremonial matters.

There are approximately 500,000 Levites in the world. The data is difficult to track because of the proof needed for lineage. Most of the Levites live in Israel although there are large communities in North America and throughout Europe.

The Tribe of Levi in the Bible or Torah is part of the 12 tribes of Israel that descended from the family line Levi. Levi was a descendant of Jacob (Israel) who is the son of Isaac, son of Abraham. Abrahamic religions of Judaism, Islam, and Christianity also hold Levi as a prominent member of their religions. The Levites' history is described in the Old Testament of the Bible or the Torah. The Tribe of Levi were mostly members of the priesthood, the people responsible for the religious leaders of the Jews. The Levite priests, known as Kohanim , were responsible for the leadership at the Jewish Temple, the Israelite building believed to contain the presence of God.

The history of Levites is closely related to the plight and the achievements of the ancient Hebrew people as a whole. The Levites were kicked out of their land through an invasion, enslaved in Egypt, and then led out of Egypt by the Levite Moses during the Exodus on their return to their homeland. Upon returning to their Holy Land, the Levites set out on reconstructing synagogues, the houses of worship and prayer for the Jews after the destruction of the Jerusalem Temple. The Tribe of Levi was often represented by a breastplate of judgment that held a specific agate stone that represented the tribal status. Today there are around 500,000 Levites with most of them living in North America or in Israel. Some Levites have integrated into Jewish or other religious communities and no longer hold the status of priests while other traditional communities continue to recognize the elevated status that Levites have had for generations.

Was Moses a Levite?

What does the Bible say about Levi?

The Bible explains that Levi was a descendent of Jacob who is known as Israel. Jacob was the grandson of Abraham who is the root patriarch of Islam, Judaism, and Christianity.

Why is the Tribe of Levi so important?

The Tribe of Levi, known as Levites, played an important role in the history and organization of Israel. Levites were mostly responsible for religious matters in Israel and served as priests.

What was the role of the Levites in the Bible?

Levites served as the priests for Israel and looked over the management of the temple or other holy sites. The Levites also assisted Israel in political and educational matters.

Tribe of Simeon History & Symbols | Who was Simeon in the Bible?

Tribe of Reuben History & Descendants of Jacob in the Bible | Who is Reuben, Son of Jacob?

Tribe of Asher History, Identity & Context | Who was Asher in the Bible?

Tribe of Joseph Split & Symbolism | Who are Ephraim & Manasseh?

Tribe of Dan Facts, History & Descendants | What Happened to the Tribe of Dan?

Tribe of Naphtali Symbolism & History | What was the Naphtali Tribe?

Lion of the Tribe of Judah in the Bible | Overview, Symbol & History

Kingdom of Judea History & Map | What is Judea?

Philip the Apostle Biography & Death | Who is Philip in the Bible?

Jezebel in the Bible: Story & Death

Jericho History & Location | Where is Jericho?

Pharisees & Sadducees: Beliefs, Meaning & Encounters with Jesus in the Bible

King Saul of Israel: History & Timeline | Who Was the First King of Israel?