The prefix "tri" means three, and the root "chroma" means color, so trichromatic means three colors. The trichromatic theory of color vision is a theory that states there are three different color receptors in the retina. The cones in the retina are what give color vision. This theory says the cones are sensitive to three different colors: green, blue, and red. When these colors are combined, eyes can tell a difference between millions of colors.

This theory was first suggested by Thomas Young and Hermann Von Helmholtz. Thomas Young was the first to theorized three color receptors present in human eyes, each sensitive to a different wavelength of light: short, medium, and long. Decades later, Hermann Von Helmholtz set up a series of experiments to test the theory and found it was accurate. He was better at identifying the wavelengths and proved that having only one or two of three photoreceptors made it impossible to match colors accurately. Accordingly, the theory is sometimes called the Young Helmholtz Trichromatic Theory or the Young Helmholtz Theory. It is recognized in multiple science disciplines, from anatomy and biology's study of the body and its parts to psychology's understanding of how the brain understands the inputs from our senses.

Thomas Young was the oldest of ten children, but he was not raised by either of his parents. He moved between family members and boarding schools during his childhood. He was recognized as a young genius but had difficulty in many schools due to thinking about large abstract concepts rather than the subjects which were being taught. He enjoyed studying medicine, physics, and many languages. After dissecting an ox's eye, he became fascinated by the way we understand color. In late 1801, he presented his research "On the theory of light and colors", which was later published in 1802. That proposed the theory of three-color vision.

In his paper, he explained how he had two pinholes on a screen and allowed light to pass through. He was able to make the light beams spread apart or overlap. He established that light is a wave. This wave theory helped him explain how one can see colors in water bubbles. He said colors would each have different wavelengths. He also calculated the wavelengths of the colors, which Newton recognized. He used this research to determine that by having three specific color receptors, human eyes would be able to see all of the different colors.

Thomas Young was also the first person to describe astigmatism. In his spare time, he studied Egyptian hieroglyphics and helped to decipher the Rosetta Stone. Later in his career, Young studied elasticity and even has a constant in the equation that describes elasticity named Young's modulus. After a healthy life, he became sick and died only three months later at 56. He was not highly recognized for his discoveries during his lifetime, and very few people took note of his passing.

Hermann Von Helmholtz was born Hermann Ludwig Ferdinand Helmholtz in Prussia (now Germany). His father was an educator and wanted his eldest child to become a doctor. After attending medical school, he served in the military, but he used his spare time to complete many experiments. He had major contributions to the fields of electrodynamics, mathematics, meteorology, optics, and physiology. 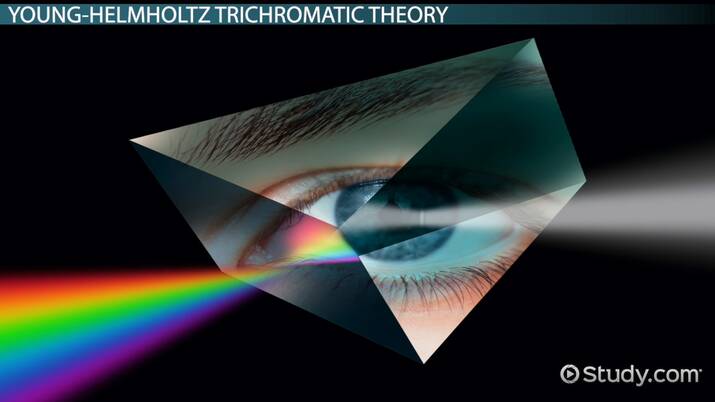 Coming up next: Goethe's Color Theory

While Hermann Von Helmholtz never met Thomas Young, he believed in the theory that he proposed. In the 1850s, Hermann Von Helmholtz performed a series of experiments asking participants to match colors. When he allowed people to use three wavelengths, they could accurately match all colors. However, when he only let them use one or two wavelengths, they found the task was practically impossible. It demonstrated that all three colors were needed in the retina to see it in the visible light spectrum. This research was published in 1860, and the trichromatic theory of color vision was then recognized as the Young Helmholtz Theory.

Many of Helmholtz's discoveries were recognized during his life as being groundbreaking. Shortly after his death, the discovery of relativity, x-rays, and radioactivity shifted focus away from the type of research he had been doing during his life.

Unfortunately, the trichromatic theory still didn't explain color vision completely. It provided no way of understanding afterimages. An afterimage is the color seen after looking at a different color. For example, if someone stares at something yellow and then looks away, they will see the color blue, even if there is nothing blue within their vision. A scientist named Ewald Hering came up with the idea behind opponent process theory. This theory says that colors are competing with each other. He thought there were three channels or options for viewing colors. Each channel would allow for a pair of colors to be viewed. He believed the pairs were: black-white, blue-yellow, and green-red. He stated that if eyes see a lot of one of three colors, the other color is trying to be seen and appears as an afterimage.

The trichromatic theory of color vision says that human eyes only perceive three colors of light: red, blue, and green. The wavelengths of these three colors can be combined to create every color on the visible light spectrum. This theory was first suggested by Thomas Young and later tested by Hermann Von Helmholtz. They are both credited in the theory, which is also called the Young Helmholtz Theory. However, the trichromatic theory does not explain color vision entirely, so another theory was proposed. Opponent process theory states that there are three receptor channels, and each has two competing colors fighting to be recognized. This theory explains the concept of afterimages, when one sees a color that isn't there after looking at one color for a long time. After more research, the two theories are now understood to work together. The trichromatic theory describes how the eye and vision receptors work, while the opponent-process theory explains how the brain and neural system interprets color.

What is the trichromatic theory in psychology?

The trichromatic theory in psychology is how the brain understands and interprets the colors that it sees. It reinforces the anatomy and biology theory by the same name.

What are the three trichromatic colors?

The three trichromatic colors are blue, green, and red. These three colors can be combined to make all of the colors that are on the white light spectrum.