Triglycerides belong to a structurally-diverse class of macromolecules that includes some of the most important biochemicals in the human body.

When the amount triglycerides exceeds what the body needs, triglycerides are stored in adipose tissue, in the liver, and can be found circulating in blood plasma.

In everyday life, triglycerides are called fats or oils.

The fatty acids of triglycerides are also described with words like saturated, monounsaturated and polyunsaturated.

Another way to think about triglycerides is based on the types of fatty acids present in them. For example, triglycerides can be simple or mixed in their fatty acid composition.

These mixed triglycerides are components of animal tallow, cacao butter and lard. 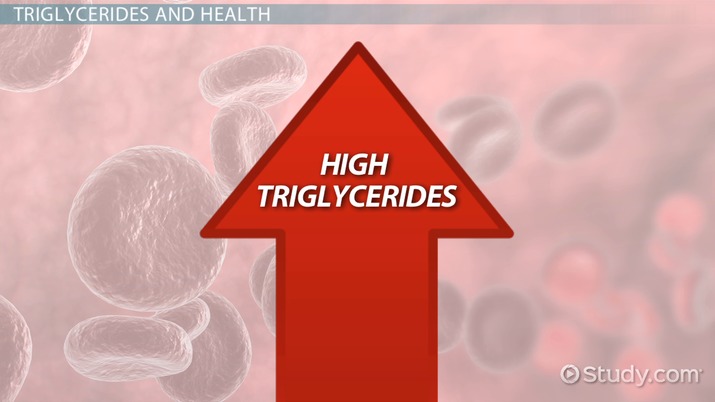 Try it now
Back
Coming up next: What Are Vital Signs? - Definition & How to Take Them

There are three important parts to a triglyceride molecule,

The fatty acids that attach to the alcohol groups of glycerol can be saturated or unsaturated.

Saturated fatty acids contain only single carbon to carbon bonds in the hydrocarbon portion of the molecule.

Unsaturated fatty acids contain at least one double carbon to carbon bond in their hydrocarbon chains.

If the triglyceride contains saturated fatty acids, the long nonpolar tails can pack tightly together and result in a higher than expected melting and boiling point. If the triglyceride contains unsaturated fatty acids, the melting point and boiling point are lower because the hydrocarbon tails cannot pack as tightly due to a structural "kink" that results from the presence of the double carbon to carbon bond.

Both of these triglycerides contain the same number of carbon and oxygen atoms a have a very similar number of hydrogen atoms. The fact that oleo-distearin contains a double bond in the attached oleic acid lowers the melting point significantly.

From the structure of a triglyceride, it is obvious that both glycerol and fatty acids are required to synthesize the molecules.

Before entering the triglyceride pathway, a phosphate is added to the glycerol molecule creating glycerol-3-phosphate. The synthesis of triglycerides can be thought of as occurring in four basic steps - fatty acid activation, phosphatidic acid formation, diacylglycerol formation and finally, triglyceride formation.

The major function of triglycerides centers around energy creation and energy storage. The long hydrocarbon tails of the esterified fatty acids are an enormous source of stored energy for the human body.

Where are Triglycerides Stored?

The major site for triglyceride storage in the human body is within specialized cells called adipocytes.

Triglycerides are important macromolecules because they give the body a way to store energy-rich fatty acids.

The fatty acids of triglycerides are also precursors for lipoprotein particles and cell membrane components.

What are the 3 types of triglycerides?

Triglycerides are composed of glycerol and fatty acids. They exist as solid fats or liquid oils at room temperature. They are classified as simple or mixed triglycerides based on they type of fatty acid that is present in the molecule.

How triglycerides are formed?

Fatty Acid Types & Function | What is a Fatty Acid?

Fatty Acid Types & Function | What is a Fatty Acid?