Trigonometric Relations in the Right Triangle 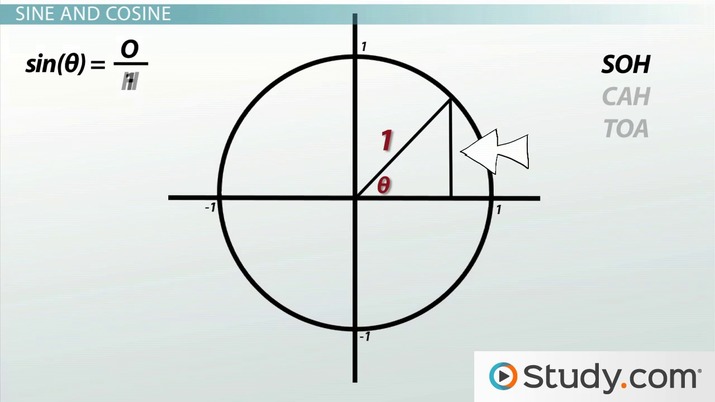 Coming up next: Graphing Sine and Cosine

The idea of sine and cosine can be applied for every real number, and not only for the angles of a right triangle. The notion of a tangent, however, cannot be extended to some numbers because it is the ratio between the sine and the cosine. Because it is a fraction, the denominator cannot be zero. When we expand the trigonometric concepts, it is necessary to use a unit circle, which is simply a circle of radius {eq}1 {/eq} centered at the origin {eq}O(0, 0), {/eq} as shown in the image.

The coordinate axes divide the Cartesian plane into four regions, called quadrants, and defined in the following list, which contains a fancy symbolic notation that will be explained afterward:

The first quadrant is the set of points in the Cartesian plane where both the abscissa and the ordinate are positive. The explanation of the definition of the other quadrants is analogous and, for this reason, will be omitted. In the next image, we show the four quadrants and the coordinate axes.

Let's see a couple of unit circle triangles in a figure because they will help us when defining the trigonometric functions.

Now we are ready to see the definitions of the trig functions using the trig unit circle. Consider the last example where we have a right triangle {eq}OPR, {/eq} with {eq}P(x, y) {/eq} being a point on the circumference and {eq}\alpha {/eq} being the angle depicted below.

Sine of an Angle Using the Unit Circle

Because the sine of a number is the ordinate of a point on the unit circle and, if we walk counterclockwise on it from the point {eq}(1, 0), {/eq} the conclusion is that the sine is increasing on the first and fourth quadrants, and decreasing on the second and third ones. On the first and second quadrants, sine will be positive; it will be negative on the third and fourth quadrants. Also, the maximum y-value of a point on the unit circle is {eq}1 {/eq}, and the minimum, {eq}-1. {/eq} So, the range of the sine function is the interval {eq}[-1, 1]. {/eq}

Cosine of an Angle Using the Unit Circle

Example 1: How to Find Sine of a Right Triangle?

Determine the angle {eq}\alpha {/eq} based on the following image.

In this lesson we saw the sine (opposite side over hypothenuse), cosine (adjacent side over hypotenuse), and tangent (sine over cosine) of angles, beginning with trigonometric relations in the right triangle and expanding those notions to the trig unit circle, a circle centered at the origin with a radius of one. We showed the trigonometric ratios of important angles and of {eq}0^{\circ} {/eq} and {eq}90^{\circ} {/eq} too: {eq}\sin 0 = 0, \cos 0 = 1, \sin 90^{\circ} = 1, \cos 90^{\circ} = 0. {/eq} The lesson ended with a couple of examples where we saw how to find the sine using a right triangle and the cosine using unit circle triangles.

What is the unit circle in trigonometry?

In trigonometry, the unit circle is a circle of radius 1 centered at the origin, that is, the point (0, 0)

What is cos on the unit circle?

Let O(0, 0) and P(x, y) be a point on the unit circle. The cosine of the angle between the positive x-axis and OP is x, the abscissa of P.

Law of Sines: Definition and Application