What is a Troubadour?

A troubadour was a composer and performer of music and poetry between the 11th and 13th centuries, originating in Occitania (a region in southern Europe). They were responsible for entertaining the nobility of the region, and traveled from city-to-city performing various songs and epic poetry for all classes of audiences. Troubadours were the primary source of secular music for audiences during the medieval period.

The Occitan word trobador is widely regarded as the influencing origin of the French word troubadour, meaning "composer" or, "To compose, to discuss, or to invent." The exact etymology of the troubadour definition and word origins are varied with many alternative explanations. The first use of the word troubadour was found in the Occitan writings of Cercamon, one of the earliest troubadours in recorded history. 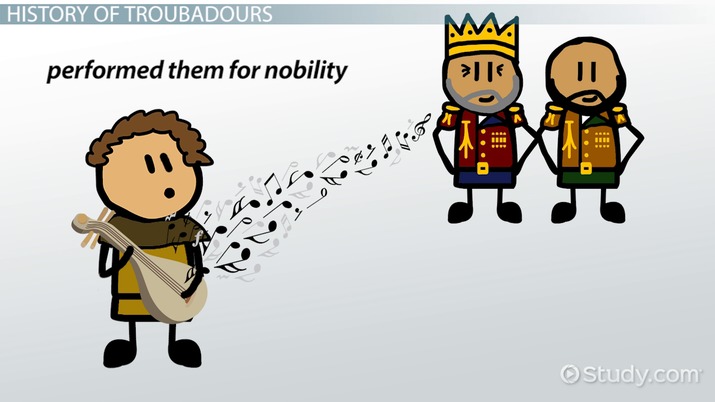 Which Countries Were Influenced by Troubadours?

The ideas and traditions of medieval troubadours developed from musical and poetic traditions of the Middle East. As troubadour music began migrating south towards the medieval region known as Occitania, the troubadour tradition became increasingly important to the secular entertainment landscape of medieval southern Europe. Occitania includes modern countries and regions such as:

The earliest troubadour whose work survives is Guilhèm de Peitieus, better known as Duke William IX of Aquitaine. The troubadour tradition seems to have begun in western Aquitaine (historical region of southwestern France).

Troubadours quickly became a staple part of life in medieval period, gaining popularity throughout the southern regions of Europe. In the early 13th century, it began to spread into Italy and then Catalonia, an independent region within Spain. The troubadour tradition soon travelled through Spain and Portugal, and eventually influenced other related musical poetry traditions:

Troubadours and the related European performers came from a variety of classes and backgrounds. Troubadours were either travelling performers, moving from villiage-to-villiage, or remained stationary under the employment of a wealthy patron or nobleman. Many troubadours are described as "poor knights."

What Made Troubadours So Influential?

Troubadours acted as medieval messengers traveling from town to town, in many instances disseminating the latest news, events, and important information from places locally and abroad. This information would be combined with song and poetry, with lyrics that were secular and often raunchy, comedic, or saccharine. The idea of courtly love or romantic love was largely invented by medieval troubadours. Troubadour music shaped the ideas of medieval pop culture and current events (much like a medieval late-night talk show host). In an era without regular outlets for villagers and common people to receive regular news and entertainment, the troubadours served as a source for both. Troubadours also worked as a messenger of current events or liaison between noblemen and the rest of the society.

During the Christian Crusades, many medieval troubadours were knights and nobles who joined the ranks as lyric poets. These knight-troubadours traveled with those of the knighthood, accompanying those who went on crusade and allowing them to spread the latest news from all around the region. The troubadour's social position gave them an objective and outside perspective on the Crusades, and the ability to maneuver and perform as messengers rather than active participants. During this time, medieval society and politics were largely influenced by the Catholic Church. The troubadours remained mostly outside the grasp of this influence, and served rather as journalists of their time. The ability to freely create performances and lyrics that existed outside the values of the church was only truly afforded to the troubadours, even though the Catholic Church often stood against the material presented in troubadour music.

Troubadours and the Church

The troubadours and others of similar tradition performed music and lyrics outside the moral confines of the church and medieval society, much like modern-day journalists, entertainers, and social media influencers. Far removed from the influence of the Catholic church, troubadours were able to create material and disseminate information without moral constraints and expectations. These messenger-entertainers were free to create commentary and performance on any topic necessary, often pushing the boundaries of what is deemed acceptable by the church. Because of this freedom from the powers and influence of the church, the song and poetry of troubadour music was written from the perspective of an autonomous cultural observer rather than participant. This unfortunately did not come without consequence for some.

The Roman Catholic Church was the primary cultivator and keeper of all music, architecture, poetry and learning during the medieval era. Music was intended by the church as a means of prayer and meditation, and this was true with the exception of the troubadours. This was not favorable in the eyes of the church, and many troubadours were persecuted and killed for their music. Troubadour music in some courts may have even been considered to be racy in current times, but especially in the 12th and 13th centuries. The church had motivations to control the material performed by the troubadours, but the traditions continued despite their efforts.

Instruments and Musical Style of Troubadours

Music was one of the primary sources of entertainment during the medieval period. Many new troubadour instruments developed during this time (including the lute), but the most important and widely used musical instrument of the troubadour was the human voice. Aside from their singing and speaking abilities, troubadours were also widely known for their skills in instruments such as:

Medieval music and lyrics were highly poetic and colorful, with poetic influence from the Middle East, Germany, and France. Troubadours uplifted the ideals of courtly love and romantic love in the langue d'oc, the dialect of southern France. Songs written by troubadours dealt in themes of chivalry and love. During the medieval era, the idea of romantic love was considered idealistic and unheard of until the troubadours began to uplift the nature of women and romance in song and poetry. During a time of war, famine, and disease, the troubadours were responsible for creating stories and social ideals of beauty, love, and bravery. Troubadour music also told stories of far away lands, historical events, and myths and legends of the Dark Ages, such as King Arthur, Camelot and the Knights of the Round Table.

Troubadour songs were usually monophonic, a melody without accompanying harmony. If an instrument was played as accompaniment, notes would be played one at a time in octaves with the sung melody. Many melodies were originally written by the troubadour, while others were set to pre-existing songs. Troubadours invented a style of lyric poetry based on meter and rhyme, usually romantic or in a ballad-style. They also implored other song styles including:

The popularity of troubadours began to decline after the 13th century Crusades. The legacy of the troubadour, however, continued through the following centuries, and marked a significant change in the role of music in society that remains to this day. Not only were the troubadours influential on the musical traditions of western Europe, they also changed the way fiction literature, epic poetry, entertainment, and popular culture centered themes of love, romance, chivalry, and history. The full scope of what is a troubadour must include the traditions of not only music, but also storytelling, journalism, and communication between the elite and common people. The term troubadour does not mean musician or poet alone, but rather a culmination of everything cultural and secular in the medieval era.

As with many modern-day musicians, entertainers, and social influencers, their role within society is influential among those in power as well as working class people. Modern-day musicians as well as troubadours are both known for having close intimate access to powerful people, and can act to their best interest as well as serve as the voice of the working class towards those in power. In addition to the societal implications, troubadours have continued to influence the way contemporary musicians approach lyrics and songwriting. Songwriters today will still lean heavily towards themes of love, storytelling, or cultural/political commentary.

A troubadour was a composer and performer of music and poetry between the 11th and 13th centuries, originating in Occitania. Countries or regions of Occitania include:

The earliest troubadour whose work survives is Guilhèm de Peitieus, better known as Duke William IX of Aquitaine. Medieval troubadours were responsible for entertaining the nobility of this region, or travelled from city-to-city to perform. Troubadours were a primary source of secular music for audiences during this time period. Troubadour songs were usually monophonic, a melody without accompanying harmony. If an instrument was played as accompaniment, notes would be played one at a time in octaves with the sung melody. They also implored other song styles including:

Chivalry, honor, and courtly love were popular themes of troubadour music. The troubadours were outside the influence of the Catholic Church and were free to explore secular themes and objective social commentary. The troubadours still influence modern musicians to this day with the use of love themes, and their influence on high society and common people alike.

The trouveres were a group of medieval epic poet in northern France in the 11th-14th centuries. Unlike the troubadours, they wrote lyrics in the used the northern dialects of France. The origins of the word trouveres are the similar to troubadour, related to the word "trobar" which means to composed, discuss, or invent.

What does troubadour mean?

A French medieval lyric poet composing and singing in southern France and Occitania in the 11th to 13th centuries. The Occitan word trobador is widely regarded as the influencing origin of the French word troubadour, meaning "composer" or "to compose, to discuss, or to invent." The origins of the word, however, are debated. Many influencing regions most likely contributed to the origins of the word "troubadour."

Troubadour Music & Instruments | What is a Troubadour?
Related Study Materials

Madrigal in Music: Definition & Examples | What is a Madrigal?

Songs of the Renaissance: Madrigals and Vocal Parts

Motet Music, Characteristics & Renaissance Role | What Is a Motet?