For example, a breakfast cereal company produces boxes of cereal. On average, each box is 200 grams. Sixty boxes of cereal were chosen randomly and weighed. It is found that on average each box contains 185 grams of cereal. There is a 15 gram difference between observed and expected values. Is this an acceptable difference? Is the difference too high, and is there something in the production line that needs to be corrected? As neither extreme (extremely higher or lower than the expected average weight) is desired, a two-tailed test will need to be conducted. The null hypothesis for the weight of each cereal box is

A two-tailed test compares the sample and population means to identify if the difference between their means is statistically significant. Although both population and sample are assumed to be normally distributed, their means are different. To compare the two standard normal distributions, z-scores will need to be used. In Figure 1, the standard normal distribution curve represents the two-tailed test. If the result of the two-tailed test falls into the unshaded region, then it means there is not enough evidence to reject the null hypothesis. In the case of cereal boxes, there is not enough evidence to say the sample mean is different from 200 grams, or in other words, the difference between the sample and the population means is not statistically significant. If the two-tailed test results fall into the shaded regions, which are also called the rejection regions, then there is enough evidence to reject the null hypothesis, and the factory manager needs to check the process of production and make changes.

Another important aspect in significance testing and two-tailed testing is the significance level, which is also known as the p-value. It represents the probability of obtaining test results at least as extreme as the results observed, under the assumption that the null hypothesis is correct. In Figure 1, it is the shaded regions that represent this probability. Because two-tailed statistics is represented in the graph, each shaded region has a probability equal to {eq}\frac{p}{2} {/eq}.

In summary, two tailed statistics is used if there is a statistically significant difference between the sample mean and the population mean.

In this case, a one-tailed significance test is suitable, as the question is asking, "Is it significantly less than the expected mean?" In Figure 2, this case is represented with a left-tailed rejection region under the curve of standardized normal distribution.

Another example of a one-tailed test would be for a course for four-year-old children which claims to be improving their memory. On average, the children can remember seven of the ten pictures shown to them correctly. After they have taken the course, they remember eight pictures out of ten on average. Is there enough evidence to say the course has improved their memory?

In this case, a right-tailed test would be more suitable, as the question of the research is to find if the course has increased memory, as seen in Figure 3.

The steps of two-tailed test statistics are as follows:

The two-tailed test formula to find the z-score is

In this formula, {eq}\frac{\sigma}{\sqrt{n}} {/eq} represents the standard error of the sampling distribution.

As mentioned above, the z-score is compared to the p-value and the rejection region. Fifteen percent (0.05) or one percent (0.01) are commonly used p-values. For example, if 0.01 is used, it means that only 1 time in 100 the null hypothesis is rejected when it should have been accepted. Therefore, a smaller p-value means the chance of rejecting the null hypothesis when it should not be rejected is smaller. The significance level needs to be decided before the test is performed based on the set criteria by the researcher. 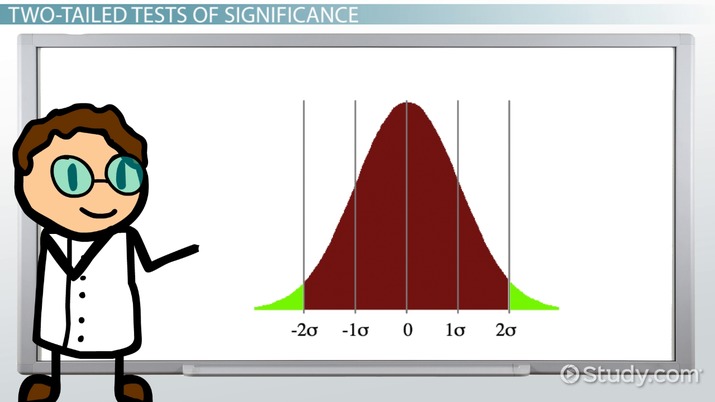 Coming up next: What is Range in Math? - Definition & Meaning

In the example of the weight of cereal boxes, the sample mean was 185 grams, and the population mean was 200 grams.

The null hypothesis for the weight of each cereal box is

For a significance level of 0.05, the rejection regions will have 0.025 in both tails, which correspond to the z-scores -1.96 and 1.96. If the calculated z-value is between -1.96 and 1.96, as seen in Figure 4, then there is not sufficient evidence to reject the null hypothesis which means there is no need to change the production line. If the z-score falls into the region z>1.96 or z<-1.96, then there is sufficient evidence to reject the null hypothesis, and the production one needs to be reset.

A machine is used to fill bags with coffee, and each bag is 1 kg. A randomly selected sample of 30 bags has a mean weight of 1.01 kg with a standard deviation of 0.02 kg. Perform a two-tailed test for the significance level of 0.01 and decide if the machine needs to be adjusted.

In statistics, the test of significance is used to determine if there is a statistically significant difference between observed values and the expected values of a statistical experiment. It is a statistical analysis designed to evaluate the probability of finding a particular value of a random variable as compared to the mean of all possible values. A two-tailed test compares the sample and population means to identify if the difference between their mean is statistically significant. In a two-tailed test, significantly different values can be found in both the upper and lower tail region, whereas in a one-tailed test, it can be found in only one of the upper or lower tail regions.

The steps of two-tailed test statistics are as follows:

The two tailed test formula to find the z-score is

In this formula, {eq}\frac{\sigma}{\sqrt{n}} {/eq} represents the standard error of the sampling distribution.

When would you use a two-tailed test?

A two-tailed test is used to identify if the mean of the expected values is significantly different than the mean of the observed values. This means that it is testing whether the means are equal, more, or less; and both tail ends of the normal distribution are considered.

What is the difference between a one-tailed test and a two-tailed test?

In a one-tailed test, the alternative hypothesis is that the mean is smaller (or greater) than the expected mean.

In the two-tailed test, the alternative hypothesis is that the mean of the population is different from the observed mean.

What is an example of a two-tailed test?

The two-tailed test identifies if the difference between the sample mean and the population mean is statistically significant. For example, if a new teaching method of statistics is to be used in schools, it is important to use a two-tailed test to identify if there is a statistically significant difference in both ends of the distribution to see if the new method produced similar, higher, or lower scores than the previous method.

Z Test Formula & Examples | When to Use a Z Test

One-Tailed vs. Two-Tailed Tests Overview & Examples | What is a Non-Directional Hypothesis?

Skewness in Statistics: Formula & Examples | What Is Skewness?