What is an Unreliable Narrator?

The reasons that a narrator might be unreliable are varied. They may show themselves to be mean, hurtful, and willing to lie to anyone to get what they want. They may instead be suffering from dementia as they tell the reader a story from their past. Or perhaps they're too young to really understand what's happening, or they are shown to have extreme biases against others. Regardless of how, or how quickly, the reader at some point comes to understand that not everything they are going to be told in the story is the objective truth. They read the remainder of the story with this knowledge.

Purpose of an Unreliable Narrator

1.Deliberately Unreliable Narrators: These are narrators who deliberately lie to their audiences. They intentionally make misleading statements or misrepresent the truth, taking advantage of the fact that they are the only perspective that is known.

2. Evasively Unreliable Narrators: These narrators alter the truth as they tell the story, but don't do it intentionally. They may be trying to justify their actions or beliefs through their description, and may or may not be aware they are doing so. 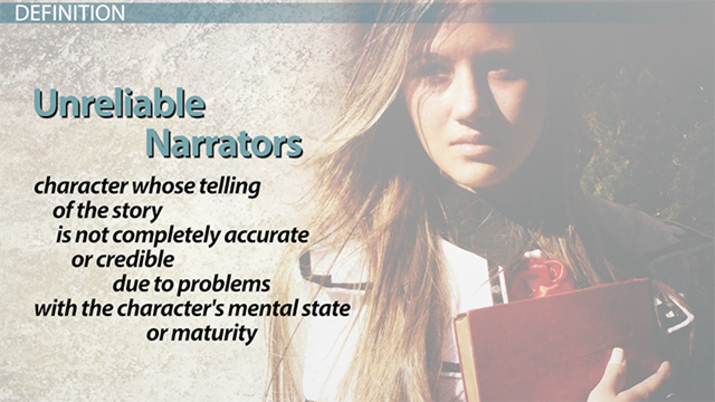 Coming up next: Climax in Literature: Definition & Examples

3. Naively Unreliable Narrators: These are narrators who do not intentionally mislead the reader, however the reader understands that the narrator's interpretation of the events can't be trusted for some reason - age, mental health, ignorance, etc.

Examples of works including unreliable narrators include:

Point-of-view, the perspective from which the author chooses to tell the narrative, is a key component of a story. Whether or not the reader can trust the person telling the story is an important aspect of that.

With a reliable narrator, the reader can believe that they are being told all of the information and that it is accurate. They will generally relate to and root for the narrator.

With an unreliable narrator, the reader has to pay attention both to the events of the story and to the way they're being told to try to figure out which are true and which may not be. It requires greater focus and can make it difficult for the reader to root for the narrator (who is misleading them).

Consider the following examples and how the narrator for each would impact how the story was told:

What is meant by an unreliable narrator?

An unreliable narrator is one who, because of motivation, character, or another characteristic (age, experience, etc.) either deliberately or not, is not completely truthful and/or forthcoming in their telling of the story.

What is an example of an unreliable narrator?

Examples of texts with unreliable narrators include: Gone Girl, The Adventures of Huckleberry Finn, Life of Pie, The Raven, and The Cask of Amontillado.

How do you know if a narrator is unreliable?

Authors will build in clues that you should begin to distrust the narrator. This could be them telling the reader something they know to be untrue, being deceitful with another character, or having a perspective that is, by position, limited.

Narrators in Literature: Types and Definitions

Peer Editing Essays: How to Help Another Student with Writing

Quoting, Paraphrasing and Summarizing Your Research

Why is The Catcher in the Rye a Classic?

Songs of Innocence and Experience by Blake