Copyright
Georgia van Raalte, Christopher Muscato
Learn about the Uraeus, the rearing Egyptian snake symbol. Explore the Egyptian snake goddess Wadjet. Discover how the Uraeus was part of the crowns of pharaohs. Updated: 03/28/2022

The Uraeus is the name given to the symbol of an upright or rearing cobra, used in ancient Egypt to denote royalty and divine authority. The pharaohs, dynastic kings and queens of Egypt, wore the Uraeus symbol as a head ornament as part of their crown. As far back as the Old Kingdom (3rd millennium BCE) wearing the Uraeus serpent communicated the pharaoh's legitimacy in ruling the lands of Lower Egypt.

In hieroglyphics, the Uraeus was often used to refer to a priestess or a goddess such as Isis. One myth about the origin of the Uraeus symbol claims that Isis created the first Uraeus, forming it from dust and spit. Isis used the snake in order to win the throne of Egypt for Osiris, her husband. 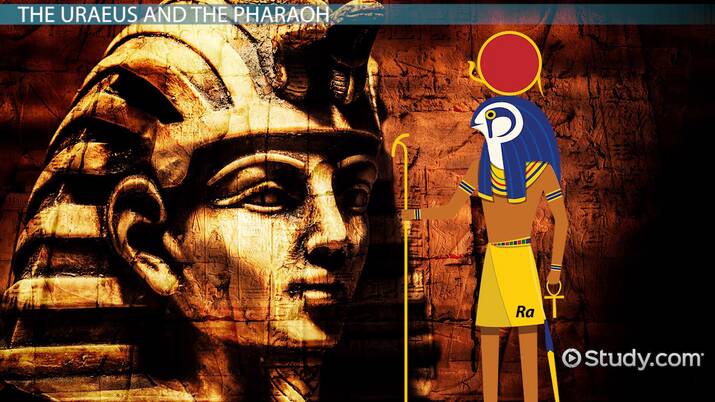 Coming up next: Crook & Flail in Ancient Egypt: Definition & Symbolism

The Uraeus is the symbol of the Egyptian snake goddess Wadjet. One of the oldest deities in the Egyptian pantheon, Wadjet was worshiped as the patroness of the Nile Delta and the protector of Lower Egypt. The center of Wadjet's cult was Per-Wadjet. The snake symbol worn by the pharaohs was seen to symbolize Wadjet's protection of the pharaoh and her approval of his claim of sovereignty. Some goddesses were also depicted wearing the Uraeus upon their heads, suggesting that the Egyptians believed these goddesses embodied aspects of Wadjet or fell under her protection.

When the Upper and Lower Kingdoms of Egypt unified, an image of Nekhbet, the vulture goddess and patron of Upper Egypt joined the image of Wadjet as the Uraeus on the pharaoh's crown. The two goddesses were known as the Nebty, the two ladies, and were seen as joint protectors of the newly-unified kingdom. When the sun god Ra rose to prominence during the Middle Kingdom and the pharaohs began to be seen as manifestations of Ra, the Uraeus was believed to protect them by spitting fire from the sun onto their enemies.

Images of the rearing cobra or snake are prevalent across Egyptian art. Examples of the Uraeus serpent can be found on papyrus, walls of tombs, and ancient artifacts.

The word Uraeus comes from the Egyptian iaret, which means risen one. This refers to the way that a cobra will rise up, rearing to protect itself. In Egyptian mythology, the snake symbol represented royalty and divinity. It symbolized the pharaoh's role as lawmaker and maintainer of order, protecting the Egyptian people from the forces of chaos.

The snake was also seen as a symbol of protection. As Wadjet, the snake spat poison at anyone attempting to rob the royal tombs. The image is found in several scenes within the Book of the Dead, indicating that the Uraeus played an important role in the spirit's journey through Du'at, the underworld.

The Eye of Ra was believed to be the feminine counterpart to the sun god Ra. Like the Uraeus, the Eye of Ra was both a symbol and a goddess. It was often connected to goddesses such as Hathor, Isis, Nekhbet, Bastet, and Wadjet, the serpent goddess. The Eye of Ra was understood to have a violent aspect, which defends and protects from enemies and chaos, and a creative aspect, helping to maintain the creative cycle of Egyptian cosmology. The Eye of Ra is sometimes presented as being equivalent to the crown of united Egypt and the Uraeus serpent, offering protection and granting royal authority.

A myth found recorded in the Bremner-Rhind Papyrus of the Late Period (and alluded to in the Middle Kingdom Coffin Texts) illustrates the connection between the Eye of Ra and the Uraeus. The myth describes how, before the world was created, the solar deity Ra was alone. His children, Shu and Tefnut had drifted away from him amidst the watery primeval chaos of Nu. Ra sends out his eye to find his children. The eye returns with Shu and Tefnut but is upset to find that Ra has created a new eye for himself while she has been gone. In some versions of the story, the Eye of Ra weeps at finding herself replaced, and her tears become the first humans. Ra appeases her by giving her an exalted position; she would reside on his forehead in the form of a rearing snake, the Uraeus.

In 1919, during excavations of the El-Lahun Pyramid at Saqqara, a Qufti worker named Hosni Ibrahim uncovered the Golden Uraeus of Senusret II. This is the most famous example of a Uraeus item that there is today. The Uraeus of Sensuret II is made of solid gold. It has black granite eyes, a head of ultramarine lapis lazuli, a flared cobra hood of carnelian, and turquoise inlays. The snake symbol was designed to be worn on the pharaoh's crown, and it has two loops built into the tail so that it could be attached to the front of the crown. It measures 6.7 cm from top to bottom.

The Golden Uraeus of Sensuret II and the Uraeus found in the tomb of Tutankhamun in 1922 are the only examples of golden Uraeus buried with pharaohs. Some scholars believe these ornaments may have usually been passed down from one pharaoh to the next.

The Uraeus is a stylized symbol of an upright or rearing cobra. The Uraeus serpent represented the Egyptian snake goddess Wadjet, patroness, and protector of Lower Egypt. In ancient Egypt, the Uraeus represented divinity, sovereignty, and royal authority.

The pharaoh wore a Uraeus symbol on his crown in order to represent his authority of Lower Egypt. The Uraeus was also a protective symbol and was believed to guard the pharaoh as well as to symbolize his own role as protector of Egypt. With the snake at his forehead, the pharaoh maintained order and prevented chaos from entering the Egyptian kingdom.

What is an Egyptian Uraeus?

An Egyptian Uraeus is a stylized symbol of a rearing cobra. This symbol is found throughout Egyptian art and iconography and was part of the crown worn by the pharaohs.

Who is the Egyptian god of snakes?

Wadjet was the Egyptian snake goddess. She was one of the oldest deities to be worshipped by the ancient Egyptians. Wadjet was the protector and patroness of the Lower Kingdom.

What does a snake symbolize in Egypt?

In Egypt, the Uraeus snake symbolized divinity, sovereignty, and the right to rule. It symbolized regency over the Lower Kingdom. It was also a symbol of protection, both for pharaohs and for everyday people.

The Pharaohs as Patrons of the Arts

Hyksos History & People | Who Were the Hyksos?