Jenna Mellentine, Christopher Muscato
Discover the different American political parties. Learn about the history of U.S. political parties, what led to their formation, and their functions. Updated: 05/12/2022

What is a Political Party? 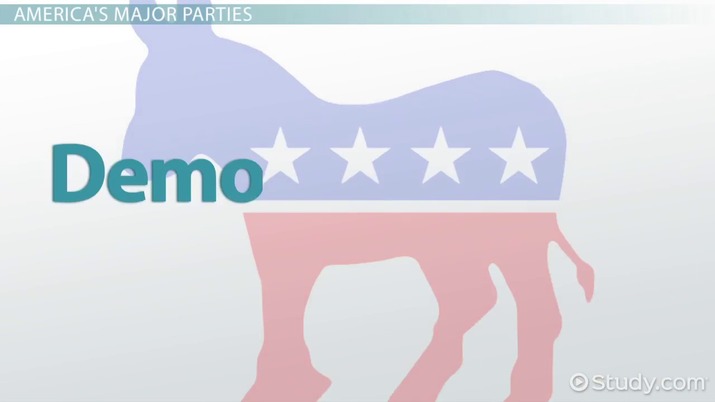 Coming up next: The Relationship Between Political Parties & Interest Groups

Jefferson feared that the Federalist Party would grow the country into a monarchy, and he ultimately resigned from his cabinet post. He began working with James Monroe and formed an opposition party to the Federalists, the Democratic-Republican Party. This was soon shortened to either just Republicans or the Jeffersonian Republicans. In 1800, Jefferson was elected president, and Republicans were in power, making the Federalists the opposing party.

The Democratic-Republicans were initially an oppositional party to the Federalists, with similar ideals as the Anti-Federalists. The party held the ideals of states keeping the power so that the agrarian societies, especially those in the South, could maintain power over enslaved people if their states chose to do so.

In 1824, four Republicans ran for president. John Quincy Adams won the presidency by one House of Representatives vote. After this, the Republican Party split into two parties. Initially, one party called themselves by the original name "Democratic-Republicans," but it then got shortened to the Democratic Party in 1828. The other party was the National Republican Party.

In 1834, the National Republican Party helped form the Whig Party, which was the original opposing party to the Democratic Party. In the years leading to the Civil War, Whigs and Democrats both ran and won presidential elections. These two parties formed and established the two-party dominant system still in use today.

Whigs and nonconforming Democrats formed the Republican Party of Abraham Lincoln in 1854. This Republican Party was formed because anti-slavery Whigs and Democrats were against the Kansas-Nebraska Bill of 1854. This bill dissolved the Missouri Compromise and left it up to individual states whether to be slave or free states. Since then, Democrats and Republicans have effectively run the White House and D.C., with one party always controlling the majority of power. However, Democrats and Republicans have switched platforms since this time period in history.

By the 1960s the Democratic Party had fully switched platforms with the Republicans by aligning with social justice reforms, mainly the Civil Rights Act of 1964. The Democratic Party now believes in bigger government regulation, as it is there to protect citizens. The Republican Party's ideals and beliefs now align with fewer government regulations, are against amnesty for undocumented migrants, and believe in justice for the individual over group rights.

What Led to the Formation of Political Parties?

Political parties are formed to serve a political purpose at the time of their relevance to sustain the country's ideology, trade, influence, or economic viability.

The Democratic Party formed as an ideological party to oppose the centralized government and give freedom to govern to the states. This was one way to keep states able to be slave states. Keeping slaves was an ideology important to Southern states at the time, as they had many plantations and depended on the free labor of slaves to keep their agrarian societies economically profitable. It originally formed as the Democratic-Republicans, then Republicans, and finally got named Democratic Party in 1828.

The Democratic-Republicans or Jeffersonian Republicans' purpose was to oppose the Federalists when the party was first created. As they evolved into the Democratic Party, the original opposition party to the new Democratic Party was formed by members of the Whig Party. The Whig Party evolved as an ideology to favor Alexander Hamilton's vision of commercial trade and conservatism and to centralize the federal government.

The Whig Party disintegrated because of the Kansas-Nebraska Bill of 1854. Abolitionist Whigs and Democrat nonconformists were anti-slavery and wanted a federal ban. They formed the Republican Party in 1854. Abraham Lincoln was elected in 1860. This led to the Civil War and later the Emancipation Proclamation and the 13th Amendment.

This is not a comprehensive list of each party's beliefs and values, but a brief idea of some of the most important ideals of each of the four major parties.

American political parties contribute to the political systems running in the United States. Sometimes these parties disagree on effective ways to make laws and run the government. When lawmakers in Congress disagree, parties try to find bipartisan ways to pass bills to make laws. Bipartisan bills appeal to the ideals of both dominant parties while making concessions to both parties' wants as well.

Since the Civil War and the rise of the Republican Party, the United States has favored a two-party dominant political system. A two-party system like this is favored because of legislative and elective procedures that favor majority rules. Belonging to only one or another group ensures a majority requirement will be met when proceedings are done. This is why the current system has favored the current status quo of the Democratic and Republican Parties for so long.

While there are currently four major parties in the United States, a party that is currently not dominant is considered a third party. Third parties are often factions of other major groups that have broken away because their ideologies and beliefs no longer align in some manner. Third parties often have trouble acquiring ballot status and can fail to raise enough funds to run an effective campaign.

What is the Function of Political Parties?

The function of political parties is to bring groups of people together who hold the same set of ideas and beliefs and get them to vote for a candidate or candidates who will put those ideas into actionable goals. The actions can be laws, ordinances, or influencing the people who make those changes.

Small political organizations within a party may hold meetings or small rallies, or even pass out brochures for local campaigns for community leaders. Regional leaders may hold press conferences, meet business leaders around the regions, and have their organizations hold larger rallies. National and state-level candidates will hold massive rallies and campaigns with large people meet-ups, greet entire communities, and have commercials on tv and other media. These events help bring the political parties' people together and feel united for a cause and their beliefs. People who organize and help plan political events feel more rooted and involved in their communities.

How many political parties are there in the United States?

There are so many political parties it can be difficult to count. There are four major parties and two dominant parties, the Democrats and the Republicans.

What are the four main political parties in the U.S.?

The four main political parties in the United States are the Democratic, Republican, Libertarian, and Green Parties. Democrats and Republicans are the dominant parties in a two-party system.