What Is the Vestibular System?

The vestibular system is also known as the system of balance, and it comprises several important organs that are mostly found in the inner ear.

The term "vestibular" means something that functions as a vestibule, or a passageway between the inner and the outer areas. This is because the vestibular system consists of several key cavities, such as the one found in the ear. The vestibular system consists of several organs and structures that have important functions for maintaining equilibrium in the body.

Where Is the Vestibular System Located

The vestibular system has several important functions pertaining to maintaining the body's balance and the sensation of hearing. The former function is maintained by the vestibular system organs having the ability to detect motions in the head relative to gravity, and this also corresponds to the ability to regulate visual gaze, spatial orientation, navigation and posture. When a person experiences dizziness, it is often caused by the vestibular system. Head motion in certain directions activates the receptors found in the organs, so the receptors are direction-specific. Other receptors are activated by linear acceleration, in addition to tilts of the head. 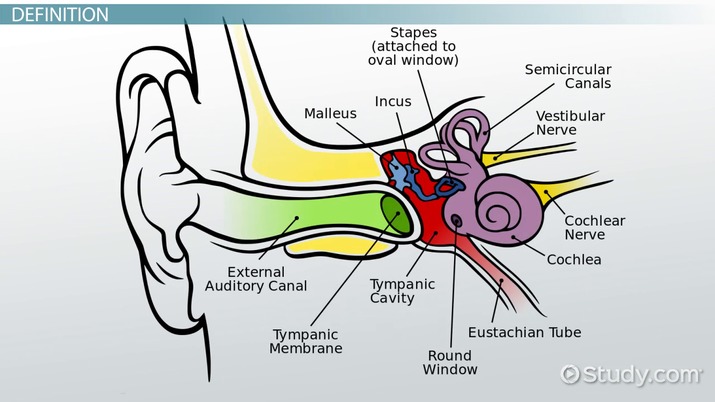 In order to understand how the vestibular system works and functions, it is important to know the organs and structures that make up this system. The vestibular organs are listed below.

The vestibule is the structure the vestibular system is named for, and it is responsible for detecting gravitational forces. It is found within the inner ear, and the two main sacs of this structure, the utricle and saccule, are also known as otolith organs. These otolith organs contain vestibular receptors that become activated with changes in head tilt relative to gravity. The saccule is responsible for transmitting information about gravitational and acceleration forces that are rising and falling, whereas the utricle is responsible for sensing the forward and backward motion of those forces. The vestibule is also the central part of the inner ear, and is named as such because it looks like the entrance hall of the ear.

Other structures of the vestibular labyrinth include the semicircular canals, which comprise of three tubes perpendicular to one another, such that each tube sits on a plane of rotation. The semicircular canals include the horizontal, anterior, and posterior canals. The semicircular canals can detect head movements that correspond to nodding (up and down), shaking (side to side) and tilting (left or right), which are components of rotational acceleration. The three canals are filled with a liquid that moves with the rational acceleration of the head, and the liquid empties into other chambers, which signal the vestibulocochlear nerve to transmit information to the vestibular cortex, brainstem, and cerebellum. At the base of the semicircular canals, a structure known as the cristae ampullaris transmits sensory signals to the brain about the head's rotation or tilt. The cristae ampullaris differs from the otolith organs because it does not contain calcium crystals. Together with the otolith organs, the semicircular canals can detect head motion in 3D space.

The vestibular receptors are located in the inner ear near the cochlea, and they are important in detecting rotational and linear motions, in addition to tilts. There are five main vestibular receptors in every ear, and three correspond to the semicircular canals (horizontal, posterior, anterior) and two are the otolith organs (saccule and utricle). The receptors comprise fluid-filled tubes filled with the receptor cells called hair cells (also known as stereocilia), which are found in the center of the tubes. The hair cells of the semicircular canals are covered by a gelatinous substance known as the cupula, which separates the liquid from the hair cells. The movement of the liquid found in the canals results in the distortion of the cupula, and this causes movement of the stereocilia. When these hair cells move, they send signals to the rest of the vestibular system.

The vestibular system is comprised of five key structures in the inner ear that have important functions in balance and coordination. The main components include the three semicircular canals (horizontal, anterior, and posterior), and the two otolith organs known as the utricle and saccule. The vestibulocochlear nerve is the main transmitting nerve in this system that carries information on hearing and balance to the brain. The otolith organs are contained with the vestibule, a structure that the vestibular system is named for, and these organs are responsible for detecting the direction of gravitational and acceleration forces. The vestibular receptors are found in all of the five organs of the vestibular system, and they contain important hair cells that can detect motion.

Vestibular system disorders can occur when the structures are damaged or inflamed, resulting in symptoms of dizziness, the sensation of swaying, and problems with hearing or vision.

What happens if the vestibular system is damaged?

If the vestibular system becomes damaged or inflamed, the result may include dizziness, the sensation of swaying and spinning, and other complications like fever and nausea.

What does the vestibulocochlear nerve do?

The vestibulocochlear nerve transmits information on the body's balance and hearing back to the brain's vestibular cortex and hearing areas.

What is the main role of the vestibular system?

The main role of the vestibular system is to transmit information on the body's balance and posture with respect to the environment.

Why is the vestibulocochlear nerve unique?

The vestibulocochlear nerve is unique because it consists of cells that function towards two key factors, including hearing and balance.

Where are the vestibular organs?

The vestibular organs include five main structures, which are the three semicircular canals (horizontal, posterior, anterior) and the two otolith organs (utricle and saccule).

Can you fix your vestibular system?

The vestibular system can be damaged by trauma or inflammation, but medications or certain tilting exercises can often improve the symptoms experienced.

Vestibule Ear Anatomy & Function | Where is the Vestibule Located?

Thalamus Anatomy, Function & Location | What is the Thalamus?

Joint Structure & Functions | What are the Parts of a Joint?

Cochlea Function & Location | What Does the Cochlea Do?