Copyright
Ngainunmawi Sonna, Leslie McMurtry
Learn about Viola in ''Twelfth Night'' by Shakespeare with an analysis of character traits. Discover her role in this comedy and her love interests in the play. Updated: 07/07/2022

The central protagonist of Shakespeare's 1602 play Twelfth Night is Viola, a young woman who survives a shipwreck and washes up on the shores of Illyria. She had lost her father not too long ago and now believes she has lost her twin brother Sebastian due to the shipwreck. Her wit and cleverness are showcased in her disguise as a man named Cesario who finds a job as a page to the ruler of Illyria, Duke Orsino. Viola is beautiful and talented; however, her most notable characteristic is her wit.

As an employee of the Duke, Cesario is tasked to romance the Countess Olivia on his behalf. However, Olivia ends up falling in love with Cesario instead. Viola pities Olivia for unknowingly falling in love with someone disguised as a man. As the story progresses, the romantic confusion does not end there. Eventually Sebastian also washes up on the shores of Illyria and Olivia mistakes him for Cesario. She later finds out Sebastian's true identity and transfers her original love for Cesario to Sebastian, the man she eventually marries.

During this confusion Orsino has already fallen in love with Cesario. When he hears the news of Olivia's love for Cesario, the Duke is enraged at his page boy for allegedly betraying him. Cesario then reveals her true identity as Viola. Orsino, now understanding, asks for Viola's hand in marriage. She accepts his proposal. 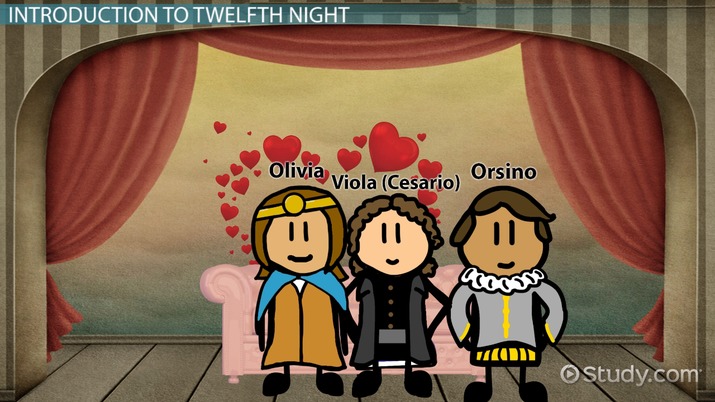 Try it now
Back
Coming up next: Fabian in Twelfth Night: Character Traits & Analysis

Viola is dynamic and complex as far as female Shakespearean characters go. Her arrival on the shores of Illyria marks the beginning of a very dramatic love story in which things do not go quite as planned. As Cesario, she is tasked to make Countess Olivia fall in love with Duke Orsino, but both Orsino and Olivia find themselves falling in love with Cesario. Her qualities of wit, care, and charm are what lead both the duke and countess to fall in love with her. An example of Viola's charm is that in just three days of her disguise, she is able to gain Orsino's trust through music, song, and unquestionable loyalty.

Her disguise is not only clever, but resourceful and provides a layer of safety. In Act 1 Scene 2, Viola laments, "O that I served that lady / And might not be delivered to the world, / Till I had made mine own occasion mellow / What my estate is." With her brother's alleged death from the shipwreck, there is no one to act as her guardian. It is also plausible that since the masculine figures of Viola's life are all gone, she now has to find a way to survive on her own. By disguising herself as a man, she finds the freedom to still be herself, in a society where it is dangerous to go out as a woman with no family to accompany her.

Furthermore, she is able to keep her brother's memory alive because she chooses to dress up like him, which explains why Olivia later confuses Viola and Sebastian. Her disguise highlights both her nurturing side and witty intelligence; the qualities that Orsino and Olivia find themselves drawn to. An example from Countess Olivia is "I heard you were saucy at my gates, / and allowed your approach rather to wonder at you / than to hear you" (Act 1 Scene 5).

As she is the catalyst for most of the story, Shakespeare does not hide the fact that Viola is a complex character. While showing immense wit and resourcefulness, the readers are also able to see moments where Viola finds herself in a state of pity and grief.

To an extent, Viola's gender-bending disguise was born out of necessity to survive in a male dominated world. Much like Rosalind in "As You Like It" and Portia in "The Merchant of Venice", Viola is among the few women who cross-dress in one of Shakespeare's plays. Literary Critic Gary Waller suggests that a more contemporary reading of Viola is that the play "asks us to applaud Viola's resumption of a properly feminine subjectivity" (Waller). Waller notes how Viola doesn't necessarily redefine what a woman is but rather sees the text as approving and reimagining what is feminine and subjective. Other critics have looked at Viola's character through thematic arcs, like identity, obscurity, and madness. Without family, especially a male guardian, it was unlikely for Viola to find the kind of safety or protection she needs. On the other hand, her disguise is ingenious, allowing her to survive in the Duke Orsino's court and take on duties unbeknownst to women.

As she lives this double life, there are a multitude of qualities and emotions that show Viola as a deep, caring, loyal, and genius character. While it would be possible for readers to look at Viola's disguise as a form of scheming, her good-natured spirit, charm, and well-timed puns make her a delightful character for Orsino, Olivia, and the audience. Another quality that makes her lovable is the knowledge that even though Viola falls in love with Orsino, she remains steadfast and loyal to him and the mission that he has given her, which is to win over Olivia for Orsino.

Yet, she also makes her feelings for the Duke known through her cryptic language, such as when she says, "if I did love you in my master's flame / with such a suffering, such a deadly life / in your denial I would find no sense".

Other Characters in the Play

Several other key characters in the play are Duke Orsino, Countess Olivia, Antonio, Sir Andrew Aguecheek, and her twin Sebastian. Each character plays their own unique role while also highlighting Viola's nature as well. Duke Orsino and Countess Olivia both find themselves in love with Viola/Cesario for the qualities she possesses. Olivia, like Viola, mourns the death of her own brother, allowing Cesario and Olivia to understand one another in a way another suitor might have not. While Olivia seems to be a good counterpart to Orsino, she constantly refuses to acknowledge his advances despite acknowledging the many good qualities he possesses.

While Viola lives out her life as Cesario, Sebastian is discovered by sea-fighter Antonio. In fact, Antonio later spots Cesario, thinking it is Sebastian, and calls him ungrateful. Antonio's relationship with Sebastian highlights the various personality differences between the twins.

Sir Andrew Aguecheek challenges Cesario to a duel, which Cesario refuses, fearing being figured out and because she does not have formal training in swordsmanship. The irony, however, is that Aguecheek is quite the timid and cowardly fellow and even an inexperienced person would have been able to take him.

In Twelfth Night, when Viola finds herself shipwrecked on Illyria, she grieves the loss of her twin brother, Sebastian, but spares no time finding herself a role as a page in Duke Orsino's court. She disguises herself as a man named Cesario and is tasked to woo the beautiful Countess Olivia for Orsino, but Olivia ends up falling in love with "Cesario." Similar to Viola, Olivia lost her brother and continues to grieve the loss. Viola feels sympathy and pity for the knowledge that Cesario is not real and Olivia loves a disguise. Cesario is challenged by Sir Andrew Aguecheek to a duel but fears doing so would expose her true identity. Eventually, Sebastian is found still alive. After a series of events, Olivia and Sebastian are married, Viola reveals her true identity to Orsino, and he proposes to her. Even though her wit is one of the most lovable qualities of Viola, the readers continue to be reminded of her tenderness and care toward Olivia and her utmost loyalty to Orsino.

What kind of character is Viola in Twelfth Night?

Viola is a kind and compassionate character with a strong sense of wit. She is moody, yet intelligent and clever. Even though she lives in disguise, she is immensely loyal to Orsino and tries to do right by others.

Is Viola a girl or boy in Twelfth Night?

Viola is a girl who disguises herself as a boy in the play. When she lands on Illyria after a shipwreck, she goes undercover as Cesario in Duke Orsino's court.

What does Viola represent in Twelfth Night?

Viola represents the catalyst for the major plot points in Twelfth Night, such as Orsino's pursuit of Olivia and the dramatic events that follow. She also represents one of the strongest female characters in Shakespeare's plays.

The Tempest: Colonialism and Magic in Shakespeare