Copyright
Andria Emerson, Artem Cheprasov
Learn about the field of science that includes the study of viruses, understand virus structure and function, and see a comparison of viruses to bacteria. Updated: 10/18/2021

The Study of Viruses

Dmitri Ivanovsky was a Russian microbiologist born in 1864 whose work was centered around the Tobacco mosaic virus (TMV). TMV enters plant cells through a minor wound. The virus causes mottling, necrosis, stunting, leaf curling, and yellowing of plant tissue. TMV can also affect other types of crops in addition to tobacco plants. In fruit-bearing plants, TMV causes the plant to have poor fruit yield, delays in ripening, and the nonuniform color of the fruit.

Between 1887 and 1890, Ivanovsky researched the disease-causing destruction in plants. He made a solution of the infectious agent and passed it through a special filter. The pores in the filter were so small that bacteria was able to be filtered out. Ivanovsky found this filtered substance he collected had the ability to infect more tobacco plants. This meant the agent infecting plants had to be smaller than bacterial cells. Ivanovsky did not understand what was transmitting the infection. He thought it was a toxin produced by the bacteria that was infecting plants.

About six years later, a Dutch biologist named Martinus Beijerinck performed the same experiment independently of Ivanovksy's work. His findings were the same. The filtered substance was able to infect other plants. Beijerinck called the infecting organisms a virus. TMV was the first virus to be discovered.

Since the 19th century, scientists have known organisms smaller than bacteria exist. Unfortunately, there were no microscopes powerful enough to detect these organisms. In 1931, Ernest Ruska and his mentor Max Knoll built the first electron microscope. It was almost eight years later TMV was visualized.

Since the discovery of the electron microscope much has been learned about viruses. Virology is the scientific study of viruses.

Below are some key advancements made in virology.

The continual drive to understand more about viruses and immunity has continued into the 21st century. New vaccines and actions are continually being developed to combat diseases. A deeper understanding of how the immune system processes and recognizes foreign substances, as well as new technologies to try to mimic and improve on these responses, are at the forefront of virology.

Much debate over whether viruses should be considered living or nonliving still remains in the scientific community. Biologists generally agree the following five key properties are found in all living organisms:

Although viruses do perform some of these processes, they are not able to reproduce on their own. Viruses replicate as they take over host cells in organisms. Once in the host cell, a virus takes over the cell making more viruses. Viruses also evolve. Viruses also do not contain metabolic machinery and are metabolically inert.

In 2003, the discovery of a very large virus Acanthamoeba polyphaga mimivirus collected from a cooling tower of a hospital in England was made. About five years later, a similar virus was isolated from the water cooling tower in Paris. Since this time, several dozen giant viruses from different areas have been isolated. These giant viruses are large and contain genes that make proteins, which smaller viruses are not able to do. They are also able to be parasitized by other viruses, another characteristic smaller viruses are also not able to do. Since then several new giant viruses have been isolated and now make up the family Mimiviridae.

A virus is a small collection of genetic coding with deoxyribonucleic acid (DNA) or ribonucleic acid (RNA) that is surrounded by a protein coat. Virology has laid the foundation in molecular biology as well as more in-depth looks at evolutionary studies.

Viruses range in size from 17 nanometers to 1.5 micrometers. The relatively newly discovered giant viruses can be about 700 to 1000 nanometers in length. Most viruses, except the giant viruses, are too small to be seen with a light microscope.

Viruses are not able to reproduce and continue to infect without the help of host cells. In order for infection to continue, a virus must replicate and create new viral structures that can infect additional host cells. When a virus enters the host cell, it must gain entry into the membrane of the target cell. When inside the target cell, the virus releases its genetic information and utilizes the host cell's ribosomes to manufacture proteins the virus needs for replication. The replicated proteins are assembled and released from the host cell where they continue the process of infection. 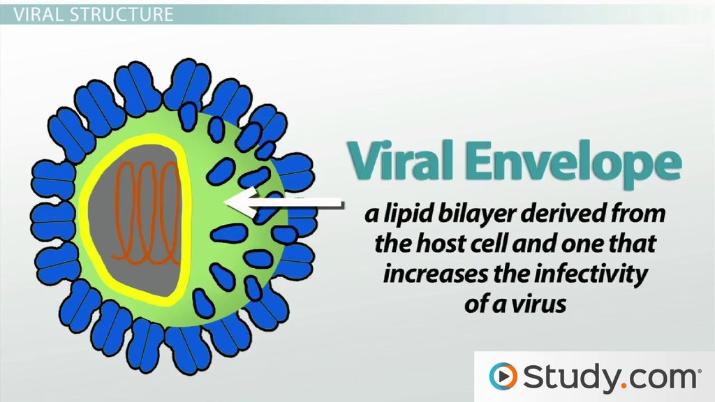 Coming up next: Shapes of a Virus: Helical, Icosahedral, Prolate, Complex & Enveloped

A virion is located outside of the host and is defined as an entire virus particle. All virions consist of nucleic acids, capsomeres, capsids, and protomers.

Viruses are found in both prokaryotes and eukaryotes.

Below are some of the similarities and differences between bacteria and viruses.

It is estimated viruses outnumber bacteria 10 to 1. A bacteriophage is a virus that infects and replicates within bacteria. They are sometimes referred to as phages.

Virology is the scientific study of viruses. A virus is a small collection of genetic coding with DNA or RNA surrounded by a protein coat. Viruses range in size from 17 nanometers to 1.5 micrometers. The relatively newly discovered giant viruses can be about 700 to 1000 nanometers in length. Most viruses, except the giant viruses, are too small to be seen with a light microscope. A virion is located outside of the host and is defined as an entire virus particle. All virions consist of nucleic acids, capsomeres, capsids and protomers. Most scientists consider viruses nonliving because they are not able to reproduce on their own and are metabolically inert. Viruses depend on host cells to reproduce and continue infection of other host cells.

What is the structure and shape of viruses?

Which structure is unique to viruses?

A virion is located outside of the host and is defined as an entire virus particle. All virions consist of nucleic acids, capsomeres, capsids and protomers. Once the virus enters the host, the genetic material (DNA or RNA) is injected into the host cell.

What Is the Immune System? - Our Body's Defense Against Pathogens