Lev Vygotsky was born in 1896 in what is now known as Belarus. He became a contemporary to other leaders in the field of psychology, including Piaget and Freud. Vygotsky, who was Jewish-Russian, grew up learning several languages and recognized the role language plays in culture. He graduated from Moscow State University in 1917 with a Master's degree in law, but his coursework also included classes in psychology, sociology, and philosophy. He then returned to his hometown and worked as a teacher for seven years.

In 1925, Vygotsky earned his doctoral degree in psychology at the Institute of Experimental Psychology in Moscow. He earned the title "The Mozart of psychology" because he produced and published many profound theories in a short period of time, much like Mozart was a prolific composer in a short period of time. Unfortunately, Vygotsky's life was cut short in 1934 when he died of tuberculosis. He died just prior to being able to publish his first book. Later, his friends and fellow researchers published his many notes and findings and credited him posthumously. His first book, Thinking and Speech, was first translated into English in 1962.

A key component of Vygotsky's theory of cognitive development put emphasis on the importance of social interactions as the key ingredient for how humans understand the world. At the same time, he thought that how people share information shapes their culture and shapes how they learn new things. Vygotsky's theory focuses on the relationship of the learner with their teacher, as well as the sharing of information through language. 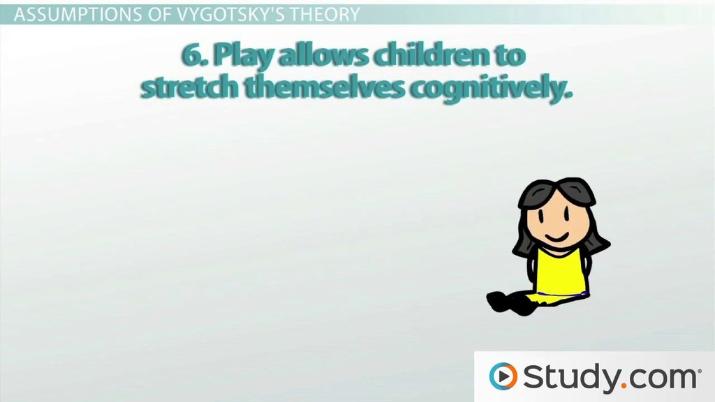 Coming up next: Zone of Proximal Development and Scaffolding in the Classroom

Vygotsky's theory of child development can be imagined as a cycle. Vygotsky maintained that there are three themes that interrelate and affect each other as a person learns: Vygotsky observed that culture is essential to learning, language is essential to culture, and learners learn how to think by the influence of their community. Vygotsky recognized how languages link communities together, and that the culture of the adults in the community influences what the children learn. Culture puts pressure on how parents raise their children, which affects how children behave in certain situations. When learners go to school or in other ways engage with people in their community, they pick up on the attitudes and opinions of the people around them. The biases, attitudes, and behaviors of the culture play out in how children learn and develop.

Vygotsky researched the connection between how people learn and how they acquire language. He noticed that as a person develops, he or she uses language in different ways and that the use of speech grows from the external cues as a baby to the private, inner thoughts of an adult. As this occurs, the individual is shaped by culture. Vygotsky created three stages of speech and language development: external, egocentric, and inner speech.

For Vygotsky, there were essentially two avenues of learning: things that a person can teach and master themselves, and things that are out of reach for the learner by themselves (and must be taught by someone else). The second avenue for learning was explained with the Zone of Proximal Development (ZPD). The goal is that the student begins with a specific skill or task just out of reach, but with the support of a More Knowledgeable Other (MKO) they will master the skill. The More Knowledgeable Other can be anyone who can lead the learner in the new skill, from a parent to an older sibling or even a neighbor. In this case, the word "proximal" refers to what is close, but just out of reach, of the learner without help. In the ZPD, the learner has the potential to master a skill or something new but needs some outside help.

There are many avenues to incorporate Vygotsky's theories into common practice. Here are some examples of scenarios that occur in everyday life.

Vygotsky's Theory in the Classroom

Vygotsky's theories continue to shape modern teaching practices. Scaffolding refers to how the MKO tailors their supports to meet the needs of the learner. A learner might need very little help with a new task or idea, or need more concrete guidance compared to another classmate. A concept related to scaffolding is fading, where the MKO reduces the level of support needed as the learner demonstrates they are mastering the skill.

Parenting often reflects how a culture uses language to teach a skill. A father might notice that his son has not learned how to tie his own shoelaces, but knows that the son needs to be able to tie his shoes by himself before school starts. The father sits with his son to teach him how to tie his shoes. The father remembers a simple rhyme that he was taught to perform this same task, so he teaches it to the child. The child watches his dad and listens as he explains how to move his fingers and the shoelace; the child internalizes the information. The father and son recite the rhyme a few times while the son watches the dad go through the motions to tie his shoes. Then, the child practices while the father watches. The father might re-address a specific step until the child shows he understands and then let the child show he can do it by himself. This task is closely related to culture since the rhymes or songs related to tying shoes might vary by region. Another detail to note is that some cultures might not even use laces to secure shoes, so the task is not a universal experience for children.

A new student wants to join the golf team and attends the tryouts for the team. The coach asks the group to demonstrate a particular swing. The coach watches the new player and notices that she does not shift her weight to her back leg like she should to have an effective swing. This is a small detail, but the student will not have an effective swing without shifting her weight. She would not pick up on the difference unless specifically taught how to swing and shift her weight. The coach calls the new player over and suggests that she use a small marker in the grass as a cue for how to sweep the golf club over the marker and simultaneously shift her weight. The coach models what he means as he explains how to move the club and body weight at the same time. The student seems to understand what the coach wants her to do. Then the coach leaves the student to practice while being ready to help if the student needs more support. After several tries, the student gets the hang of this new way to swing the club without needing the marker.

There have been criticisms over time relating to Vygotsky's development theories. Part of the problem is that since Vygotsky died at such a young age, he was not able to expand and develop his ideas over time. His Zone of Proximal Development is very vague and can be viewed by critics as a copy of some of Piaget's theories.

The biggest criticisms relate to the difficulty in testing Vygotsky's theories. Vygotsky relied heavily on observations and did few experiments to collect data. His writing also tends to be rather vague, which can be hard to experiment upon and leaves much for the modern researcher to interpret. Also, because Vygotsky wrote in Russian, there can be discrepancies between his work and translations for researchers outside of Russian-speaking places.

He also believed that learning was heavily influenced by social interactions, but did not take into account that there are specific developmental milestones that must occur before a child can master a specific learning task. Piaget revealed that cognitive development occurs in specific stages, no matter the cultural influences.

In addition, Vygotsky did not give much attention to how other cultures share information. His focus on speech interaction does not reflect cultures that pass on important cultural practices through modeling and observing and less via explanation.

Vygotsky's theories give the learner an active role in their own learning, but sometimes a motivated learner simply learns at a slower rate than do others. There are also many skills that simply require practice, no matter the learner's internalization of the steps. Vygotsky did not account for the fact that there are many factors for how a learner learns, as well as how easily a learner learns.

Piaget and Vygotsky's theories both cover how human development is affected by the communities around each individual, but there are sharp contrasts between the two theories. Here are some of the differences between Piaget and Vygotsky.

Lev Vygotsky's theory of cognitive development describes the relationship between language and culture and how a person learns. Vygotsky described three stages of language development:

There are some situations where a learner will not master a skill without help from a More Knowledgeable Other, known as the Zone of Proximal Development. Vygotsky's theory of development contrasts with the findings of Piaget, most notably in relation to understanding how cognitive development occurs and the role of language and culture for the learner.

What are the main differences between Piaget and Vygotsky's theories?

What does Vygotsky say about learning?

Vygotsky determined that there are some skills and concepts that must be directly taught to the learner. These experiences are shaped by the learner's culture and language. When there is a skill that is just outside the reach of the learner but is attainable with help, the learner is considered in the Zone of Proximal Development.

Why is Vygotsky's theory important?

Zone of Proximal Development and Scaffolding in the Classroom

Cognitive Development in Children and Adolescents