The meaning of weather is the state of the atmosphere at a particular moment in time. This includes factors such as heat, dryness, wind, or amount of sunshine in a given location. Weather is affected by many different things including seasons, climate, and fronts. Different weather events can include thunderstorms, tornadoes, hurricanes, and blizzards. It is important to understand the causes of various weather events and what they entail in order to prepare for the potential risks that come with some weather events. 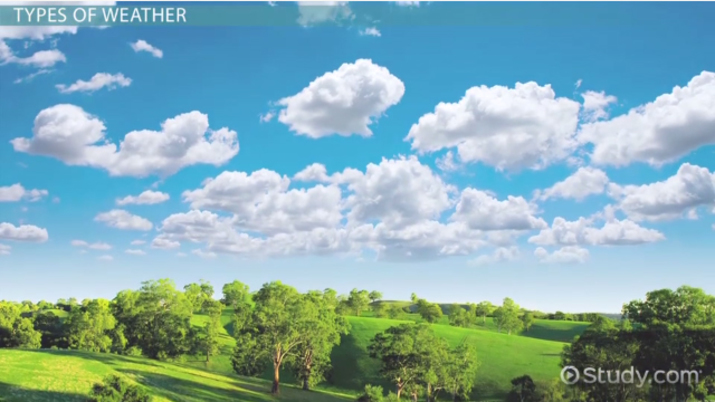 Coming up next: What is Fog? - Definition, Types & Causes

There are five primary different types of weather that can occur: sunny, rainy, windy, stormy, and cloudy. However, many of these types of weather can overlap and occur at the same time. Types of weather are influenced by sunshine, precipitation, wind, and humidity. The following section outlines some various forms of weather.

Sunny weather occurs whenever there is no precipitation and few clouds present to cover the sun. Sunshine is an important weather phenomenon because the sun's rays play a critical role in the growth of plants and crops. Sunlight provides the energy that plants need to undergo photosynthesis, the process by which they make their own food. Sunshine can also determine temperature conditions in an area as well. Areas that receive greater amounts of sunshine generally have higher average temperatures than areas that do not.

Rain, which is also known as precipitation, forms in the clouds when water vapor, a gas, condensates and turns into large droplets of water. Whenever the clouds become too heavy with water droplets, they fall to the Earth as rain. While a thunderstorm does include heavy rainfall, it also includes lightning, thunder, and in some cases strong winds and hail. Even more severe are hurricanes, which are swirling storms that include extremely strong winds. Hurricanes also include large amounts of rain, but are more destructive than rain and thunderstorms because of their wind speeds.

A snowstorm is a weather event characterized by wintery precipitation such as snow, sleet, or freezing rain. Snowstorms typically occur whenever temperatures are below freezing. Blizzards are more severe winter weather events, bringing large amounts of snowfall and high winds above 35 miles per hour.

Tornadoes are large, swirling, tunnels of wind and debris that often accompany severe thunderstorms. Unstable atmospheric conditions, such as warm, moist air near the ground and dry, cooler air above it, are responsible for the formation of tornadoes. Tornadoes can last anywhere from a few seconds to 20 minutes or more. Their winds can also reach speeds up to 200 miles per hour. Strong tornadoes can destroy structures that are in its path, making them a severe weather event.

Humidity is a measure of how much water vapor is in the atmosphere. The greater the temperature, the more water vapor the atmosphere can hold, so ecosystems with warmer climates often have humid climates as well. This includes tropical climates near the equator, such as the rainforest. Water vapor enters the atmosphere as water evaporates from large bodies on water on Earth. Humidity is measured using a hygrometer. A hygrometer is composed of two thermometers, one of which has a cloth covering the bulb. As water collects and evaporates from the cloth, the temperature of that thermometer drops. The two temperatures from the thermometers are compared to generate a relative humidity reading.

Clouds and fog both form from water vapor in the atmosphere. However, clouds can form at both low and high altitudes while fog generally forms near the ground. As mentioned previously, clouds form whenever water vapor condensates and turns into droplets of water. These droplets combine to form clouds that can be low to the ground or as high as 12 miles above sea level.

A sandstorm is a type of weather event specific to hot, dry areas of land like deserts. Sandstorms occur whenever high winds pick up the top layer of sand and create large clouds of sand. Sandstorms can be extremely large, reaching anywhere from 10 to 50 feet tall depending on the strength of the wind. They also move very quickly - up to 25 miles per hour at times. Since summers in the desert are very hot and dry, this is the time of year when sandstorms are more likely to occur.

Wind is a variable that impacts many different weather events. Wind is responsible for carrying moisture and heat from one area to another, resulting in changes in weather. Wind has a tendency to travel from areas of high pressure to areas of low pressure. Whenever there are changes in temperature or pressure within the atmosphere, wind changes direction as well. Wind can be the cause of other weather events, such as tornadoes, sandstorms, and blizzards.

The climate of an area is the general weather patterns that are seen in the area for long periods of time. Climates can be tropical, dry, temperate, continental, or polar. In each climate, the average temperature of the area is different. Hot weather is caused by greater exposure to sunlight, while cold weather is caused by lower exposure to sunlight.

All types of weather are created as a result of weather fronts. A weather front is a zone where there is a transition between two different air masses. An air mass is a body of air that has a specific temperature and volume of water vapor. Whenever two air masses meet, a front is created which causes some disturbance in the atmosphere, resulting in a weather event.

When a warm air mass pushes into a colder one, a warm front occurs. Since the cooler air is more dense, it falls beneath the warm air, which then causes storms. On a weather map, warm fronts are designated by red lines that point in the direction the warm front is moving.

When a cold air mass pushes into a warm one, a cold front occurs. Cold fronts move quickly, so they bring in strong winds and drops in temperature. On a weather map, cold fronts are designated by blue lines that point in the direction the cold front is moving.

In some cases, a cold front or warm front stops moving. This happens whenever one front is not strong enough to push the other, and a stationary front is created. Stationary fronts cause fog and long periods of rain while the front remains still. On a weather map, a line is made using both red and blue pieces that travels through where the stationary front is located.

Weather is the state of the atmosphere at a particular moment in time, which includes the amount of heat, dryness, wind, or sunshine. Climate, seasons, and fronts are all variables that influence the type of weather that occurs. Meteorologists study weather patterns to predict future weather events. Forecasting is the process in which meteorologists use past weather events and current atmospheric conditions to predict weather events. Humidity is a measure of how much water vapor is in the atmosphere and is one of the atmospheric conditions meteorologists measure in forecasting. Types of weather are influenced by sunshine, precipitation, wind, and humidity. Sunlight is responsible for how hot or cold the weather is. The climate of an area is the general weather patterns that are seen in the area for long periods of time. Various climates experience different temperatures depending on their location and proximity to the sun. Rain, which is also known as precipitation, forms in the clouds as water vapor turns into liquid and collects. Precipitation can also fall in the form of snow. Blizzards are involve large amounts of snowfall. Tornadoes are a weather event that include large, swirling, tunnels of wind and debris that can occur during storms.

A weather front is a zone where there is a transition between two different air masses, which are bodies of air that have a specific temperature and volume of water vapor.

One of the most obvious methods we have, and by far the most reliable for weather prediction, is observing clouds. Clouds can tell us a lot about the state of the weather and provide us with clues about what's likely to happen in the near future.

Using what you learned about clouds in the lesson and your own personal observations, fill in the blanks in the following paragraphs.

3) If the clouds are covering the entire sky and appear to be grey with a blue tint or fluffy white/grey with a lot of contrast between the light and dark areas, you should prepare for _____ within half a day. If the clouds are low and lumpy or low and fluffy and resemble white cotton balls, you can expect _____ weather.

4) Any _____ growth of the clouds (anvil shapes) may indicate thunderstorms. Dark clouds with a funnel extending _____ to the earth (or ocean) and signs of rotation or flying debris could be a tornado.

What are 5 types of weather?

How do you define the weather?

Weather is the state of the atmosphere at a particular moment in time. It includes things such as heat, dryness, wind, or amount of sunshine.

What is Weather? - Lesson for Kids

How Weather Affects Us: Lesson for Kids

Types of Past Tense

How to Perform Multiplication: Steps & Examples

The Single-Cell Model of General Circulation