The Liver and Its Functions

The human liver, the largest internal organ, weighs approximately 1.25 kilograms or approximately 2.75 pounds (in humans). The liver is located just under the rib cage in the upper right portion of the abdomen. The liver's primary function is the detoxification of the blood. In addition, it aids in the breakdown of food through the production of stomach bile and produces a variety of proteins and chemicals that drive protein and fat metabolism for use in digestion and providing energy sources (as glycogen). The liver can be viewed as a large filtering system for the body; anything that is ingested gets filtered through the extensive network of liver cells (hepatocytes), which break down and remove dangerous materials and yield building blocks for metabolism and energy sources. Excess glucose can be built into long-chain energy storage as glycogen that can be broken down for utilization at a later time when available energy sources are scarce. 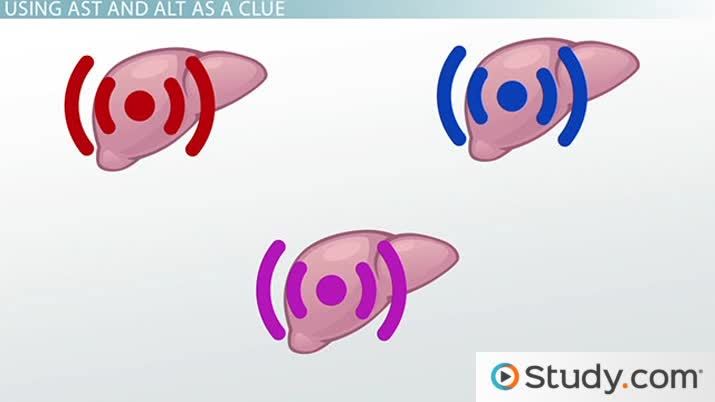 Try it now
Back
Coming up next: Amylase and Pancreatic Lipase: Causes & Associated Conditions

Liver Enzymes: What are AST & ALT?

The liver produces a large number of catalytic and metabolic enzymes that aid in the breakdown of foods, the removal of toxins, and the synthesis of molecules such as glycogen (a storage version of the energy-rich glucose). Two key liver enzymes are AST (asparatate aminotranferase) and ALT (alanine aminotransferase). As transaminase enzymes, they catalyze the reversible conversion of amino acids by the transference of amino groups. This reaction is a key step to breaking down proteins into amino acid building blocks, readying them for further metabolism. Alkaline phosphatase (ALP) is another key liver enzyme that can be used to indicate liver damage as it specifically increases due to blockages of bile ducts. These enzymes are easy to detect in routine blood samples and as such can be used in health diagnostics. When levels change from normal, to either high or low, information can be inferred about possible liver damage, improper function, or viral infections.

AST and ALT hold great clinical significance as their increase (or rapid decrease) in blood serum can indicate problems within the liver. These enzymes are used as an indicator of the level of liver damage, as they are released into the bloodstream as liver cells (hepatocytes) and die and break apart due to a variety of damage. A mixture of clinical information can be obtained through the levels of these enzymes, ranging from the individual levels, the correlations between their levels, and the direct ratios between them.

Within a healthy adult, Columbia University Medical Center (a large transplant center in New York, NY) defines normality as AST within a range of 12-38 International Units (IU) per milliliter (ml) of serum and ALT between 7-41 IU/ml. Often used in diagnosis, a level limit is set as the Upper Limit of Normal (ULN), though there seems to be no consensus on what that limit is as it varies up to twofold from lab to lab and center to center. This ULN indicates to a doctor that an issue may be present if the levels of AST or ALT are beyond (either too high or too low) this limit. A mild increase of ALT and AST is described as less than 5 times the ULN and can be an indication of chronic Hepatitis C or B, acute viral or autoimmune hepatitis, non-alcoholic fatty liver disease, alcohol-related liver disease, or from a variety of medications. A moderate increase in AST and ALT levels (at 5-15 times the ULN) indicates a progressive liver disease from a variety of sources. At 15 times the ULN, severe liver injury has or is occurring, stemming again from acute liver disorders.

Taken individually, the serum levels of these two enzymes can indicate specific issues, but their direct ratio is also an important indication of specific issues. As ALT is at its highest concentration in the liver, it is used predominately as an indication for a variety of liver issues. AST, on the other hand, is present in other organs including the heart, muscles, kidneys, brain, pancreas, and lungs. Therefore, the relationship between these two enzymes can reveal more information about the state of disease of the patient. For example, if the ALT level is greater than the AST level, this could indicate that the damage that is causing the elevated levels in the bloodstream is coming from the liver and not other parts of the body. Whereas if the AST level is greater than the ALT blood serum levels, the damage is coming from other sources, such as the heart or pancreas. These values help doctors narrow down the possible causes towards a full diagnosis.

Specific medications often used to treat pain or inflammation (such as non-steroidal anti-inflammatory drugs like ibuprofen, naproxen, and acetaminophen), if taken at high doses, at the wrong intervals, or in conjunction with alcohol, can cause elevated liver enzymes that can be confused with severe liver damage or even liver failure. A variety of other medications can elevate liver enzymes, but to a lesser degree and can easily be ruled out as cause as they tend to be prescription medications. These include (but are not limited to) statins, antibiotics, certain cardiovascular drugs, antidepressants, or pain management medicines such as oxycontin.

As part of a clinical evaluation, doctors can also use the ratio of AST to ALT to help determine the source of the elevations (or drops) in these enzymes. This ratio is created by simply dividing the units of AST by the units of ALT. In healthy adults, this ratio should be around 1.15, whereas in unhealthy or liver-damaged individuals, this ratio can be as high as 6.0. Even levels ranging to 2.0 can indicate serious problems including alcoholic liver disease or cirrhosis (or scarring) of the liver. At lower than normal levels, this ratio may indicate an acute viral hepatitis infection.

The determination of the levels of both AST and ALT and other proteins and liver enzymes are done during a routine liver function blood panel. The procedure is relatively simple and includes taking a small vial of blood, removal of the red blood cells through concentration, and subsequent analysis. These panels may include many different evaluations including the presence of total proteins, amounts of bilirubin (a waste product that can build up in a poorly functioning liver), and albumin (a stabilizing fluid that ensures healthy cell function).

When Are Tests Required?

These tests are usually ordered by a doctor after specific indication that a liver problem may be present. Some indications to warrant the use of a liver function test could include jaundice (a yellowing of the skin or eyes), exposure or possible exposure to viral hepatitis, experiencing unexpected weight loss or fatigue, abdominal swelling or pain, darkened urine and light stools or persistent diarrhea.

The liver is a key internal organ, involved in the breakdown of food and storage of energy-rich metabolites like glycogen. It acts as a global filter to remove toxins and build enzymes and proteins involved in metabolism to provide energy to the rest of the body. AST (asparatate aminotranferase) and ALT (alanine aminotransferase) are important liver enzymes involved in amino acid metabolism. Their level within the body is a key indicator of liver function and potentially problematic issues. Any deviation from normal levels can indicate to a doctor a variety of liver or internal organs issues, ranging from damage, viral infection, to overall poor or loss of function. The testing of these enzymes is rapid, requiring only a simple blood draw and a routine set of abundance tests. These numbers can quickly lead a doctor to what may be causing the symptoms. Enzymatic levels on either side of the upper limit of normal can reveal the severity of the issue and allow a doctor to infer the root cause. Lower than normal levels can indicate a viral hepatitis infection; higher than normal levels, depending on the ranges, can indicate a variety of issues ranging from non-alcoholic fatty liver disease to a severe loss of liver function.

Symptoms of unexpected weight loss, fatigue, swelling or abdominal pain, persistent diarrhea, or darkened urine might indicate problems with a liver or with other internal organs. A doctor given these symptoms would order a liver function blood panel. From the data obtained from this series of tests, a doctor will be able to make a more informed diagnosis as to what may be causing these symptoms. AST and ALT are both very important enzymes in the function of the liver; they can reveal large amounts of information about the health and function of internal organs.

What does AST and ALT measure?

A test for AST and ALT measures the levels of each of the enzymes present in the blood. Levels above or below a suggested 'normal' level can give indications of liver damage, viral infections or loss or non-functioning livers.

What does it mean when ALT and AST are high?

If your AST and ALT levels are above the upper limit of normal (ULN), you are likely experiencing symptoms of abdominal pain, darkened urine, jaundicing of the skin or eyes, all of which could be attributed to a lower liver function, a viral infection or liver damage.

Any level of AST and ALT above the upper limit of normal (ULN) has an indication of possible liver problems, stemming from a variety of sources.

What do you do if AST and ALT are high?

This question is not really relevant. The correct answer would be listen to your doctor and follow his advice. I would like to have this FAQ removed, or replaced with something more relevant to the asset

What is normal AST ALT ratio?

A normal AST/ALT ratio should be around 1.15 in healthy adults, with slightly more AST than ALT in blood levels. Levels above this 'normal' can reveal information about liver damage and the possible causes.

Hemolysis Causes & Symptoms | What is Hemolysis & Why does it Occur?

What are Rhonchi? | Lung Sound Cause & Treatment

Hemolysis Causes & Symptoms | What is Hemolysis & Why does it Occur?

What are Rhonchi? | Lung Sound Cause & Treatment