Copyright
Haripriya Munipalli, Amanda Robb, Christianlly Cena
Learn about Glycoproteins. Explore the different types of glycoproteins, their names and their examples. Discover the function they do and their importance to the human body. Updated: 10/25/2021

Glycosylation is a process in which the carbohydrate molecules are attached to the protein molecule resulting in a glycoprotein. In the cells of eukaryotes, this process begins from the endoplasmic reticulum and continues into the Golgi complex. Generally, glycoproteins are formed by the linking of carbohydrates with proteins and they are categorized based on the type of linkage. The oligosaccharides are attached to the proteins via certain specific amino acids like threonine, serine, and asparagine.

N-linked glycoprotein -- This class of glycoproteins is created through N-linked glycosylation. The carbohydrates are attached to the nitrogen of the side chain of the amino acid asparagine. The oligosaccharide that is linked with the asparagine amino acid of the protein first appears in the endoplasmic reticulum. The gathering begins with the binding of 2 N-acetyl glucosamine and 5 mannose residues to dolichol phosphate with the help of several cytoplasmic enzymes. These enzymes catalyze the movement of monosaccharides from the sugar nucleotides.

This newly created molecule moves from the membrane of the endoplasmic reticulum to its lumen where the sugar molecules are attached to it again. This entire process leads to the linking of a large oligosaccharide with the dolichol phosphate. The fully created carbohydrate moves to the region of the developing polypeptide chain so that it can get linked to the asparagine amino acid residue of the protein. This process involves the activated sugars to have specific recognition ability.

After the carbohydrate is attached to the asparagine residue of the protein, dolichol pyrophosphate is recreated as dolichol phosphate with the aid of enzyme phosphatase. This procedure is repeated with the addition of the oligosaccharide molecule. N-linked glycosylation is observed to be absent in prokaryotes and occurs in eukaryotes

O-linked glycoproteins -- These are created by the linking of oligosaccharides to the protein residues with the O-link glycosylation. The carbohydrate links to the oxygen atom of the side chain of the serine or threonine amino acid residue. The oligosaccharide molecule again prepares before getting attached to the protein having come from nucleotide precursors.

The oligosaccharide first enters the endoplasmic reticulum and then is linked to the hydroxyl group of the serine or threonine amino acid of the protein in the Golgi complex. This process is unique to O-linked glycosylation compared to N-linked glycosylation.

What do glycoproteins do?

Where are glycoproteins found?

Cell membrane -- Glycoproteins are found in the cell membrane of prokaryotes, eukaryotes, and viruses. They are part of the cell envelope/cell membrane and perform various functions. These molecules protrude outwards into the extracellular matrix in the complex multicellular organisms allowing them to perform their function efficiently.

Mucins are glycosylated proteins that consist of several oligosaccharides as they have many serine and threonine residues. In several multicellular organisms, mucins are the main portions of the mucous membrane and are found lining different parts of the body including the nasal cavity, bronchioles, uterus, and gastric mucosa. Most of the time, mucins are synthesized and released into the extracellular matrix while a few are present in the cell membrane.

Studies showed that a negative charge prevails on the glycoprotein possessing modified sugar. This negative charge of the modified sugar molecule attracts the water molecule. This is how mucin can maintain the moisture on the epithelial tissue. The carbohydrates are sufficiently sticky to trick the pathogenic agents and are preventing them from entering the cell and causing infection.

Mucin acts as a physical barrier on the epithelial tissue and is shown to aid in defending the cells from stress-induced damage. 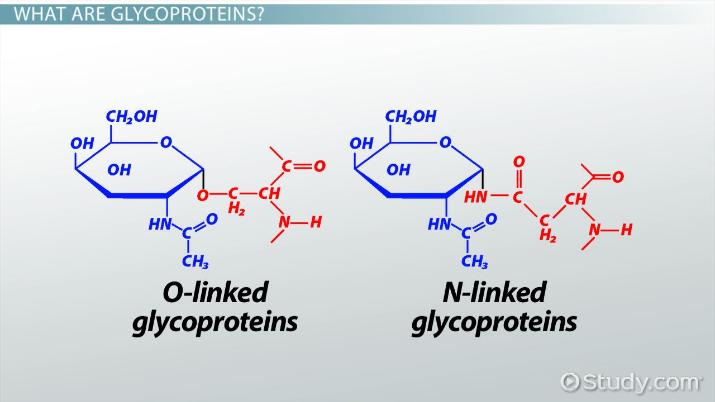 Ceruloplasmin It is a copper-containing glycoprotein that can exchange electrons with the substrates like oxygen, iron, and iron-binding proteins.

Collagens Collagen is a glycoprotein that forms collagenous fiber which occurs in the connective tissues while the others are reticular fibers and elastic fibers. Collagen protein is present in large quantities in mammals.

Calnexin and Calreticulin These are lectins that can identify a non-reducing group of the glucose residue in an N-linked oligosaccharide precursor that contributes to the proper folding of newly synthesized glycoproteins. In this process, it acts as a chaperone of the ER system as a part of quality control and by acting as a molecular sensor.

Selectin Selectins are structurally and functionally related adhesion molecules called E-selectin, P-selectin, and L-selectin. Selectins are cell surface lectins mediating the attachment of leukocytes to endothelial cells and platelets. They have an important role in signal-transducing receptors.

Glycoprotein is a protein molecule that has a carbohydrate moiety attached to it. This process is called glycosylation. Glycosylation happens either at the time of protein translation or as a post-translational modification. The oligosaccharide chain is covalently bonded to the side chains of the amino acid residues of the protein. Due to the presence of hydroxyl groups in sugar, glycoproteins are hydrophilic than other simple proteins indicating that the glycoproteins are more attracted to water.

The carbohydrate part of a glycoprotein consists of simple sugars like mannose, xylose, galactose, and glucose, amino sugars like N-acetyl glucosamine or N-acetyl galactosamine, and acidic sugars such as sialic acid and N-acetyl neuraminic acid. If the carbohydrate is bonded to the oxygen atom of the hydroxyl group of the side chain of the amino acids threonine and serine, then such proteins are called O-linked glycoproteins. If the carbohydrate is bonded to the N- of the amino group of the side chain of asparagine, the process of binding is called N-glycosylation and the proteins are called N-linked glycoproteins. Some of the glycoprotein examples include mucins, Ceruloplasmin, Collagens, Calnexin, Calreticulin, and Selectin.

This activity will help you assess your knowledge of the definition, functions, and examples of glycoproteins.

1. The endoplasmic reticulum is represented by a membrane system that produces E-linked sugars.

2. Glycogens are proteins that contain chains of sugar and are involved in most cellular processes.

3. Lectins are a type of glycoproteins that cover or form a lining on the surface of most cells.

4. Salts mixed with water in the body generate a smooth mucus that protects certain organs.

5. Mucus, formed using glycoproteins, are used in the lungs to trap bacteria.

6. Cadherins are transmembrane proteins important in maintaining tissue structure, such as in the skin.

7. The sperm finds the egg cell and attaches to it through the help of glycoproteins in the zona pellucida.

8. MHC molecules bind with white blood cells to allow them to communicate with the T-cells.

9. Glycoproteins play a vital role in immunology as they serve as transport systems of red blood cells.

10. Hemophilia is a rare disorder in which your blood doesn't clot normally because it lacks sufficient blood-clotting proteins.

What does glycoprotein do in the cell membrane?

What is the function of a glycoprotein?

Glycoprotein Function in the Cell Membrane

Vocabulary of Antigens and Antibodies

What is Cholesterol? - Definition & Overview