Monica Massonette, Derrick Arrington
What are noble gases? See the noble gases definition and varieties. Learn about the properties and applications of noble gases, and what makes them unique. Updated: 08/17/2021

What are Noble Gases?

There are seven elements that are classified as noble gases. These elements are:

The noble gases that are naturally occurring in the air can be obtained through fractional distillation. 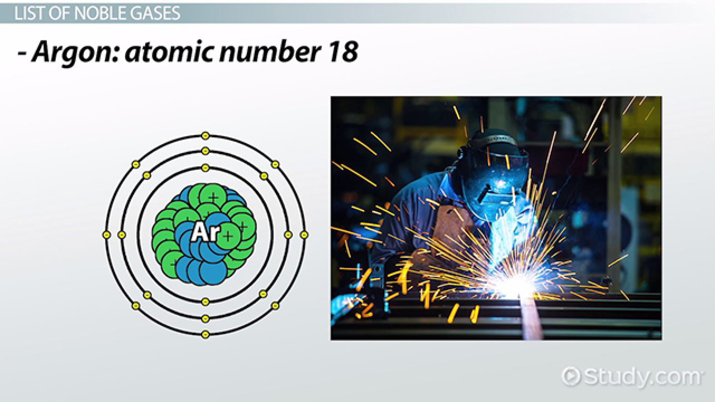 Coming up next: Nonmetal Elements on the Periodic Table: Definition, Properties, & Reactions

By using their location on the periodic table, one can make predictions about some of these properties. For instance, their atomic radius can be predicted by using the periodic table. As we move down Group 18, we will notice that their atomic radius will increase because, as we move through each period on the periodic table, the elements increase in the number of electrons they contain. Furthermore, we can make predictions about their melting and boiling points. The element with the lowest boiling point and melting point is at the top of group, helium, and as you move down the groups their melting and boiling points increase. Therefore, the noble gas with the highest melting or boiling point is oganesson.

Chemical Properties refer to the ability of a substance to undergo a chemical reaction. These include color, odor, flammability, and reactivity to name a few. Noble gases have many different types of chemical properties. In general, noble gases are colorless, odorless, nonflammable, and have a low reactivity. Their low reactivity is because they have a complete set of electrons in their outer valence.

It was once thought that noble gases do not form compounds but that has since been proven incorrect. While noble gases have a low reactivity due to their full outer shells, they can still form compounds. The noble gases that seem to have minor reactivities are xenon, krypton, and argon. The noble gas that has had the most known bonds is xenon. Xenon will bond with elements that are highly electronegative and xenon seems to have a positive oxidation during these interactions. The elements that will most commonlyform a bond with xenon include oxygen and fluorine.

Chemists can use various methods to separate noble gases and put them in a form where they can be used. The process called fractional distillation, uses heat to separate the gases. This happens because each noble gas has a different boiling point and will separate out at a different time during the heating process. The process where the noble gases are turned into liquids is called liquefication of gases. During this process, a chemist will use high pressure and low temperatures to create condensation.

Noble gases can be found in our everyday life. There are many uses for noble gases. The list below explains some applications of each noble gas.

Because of these physical and chemical properties, the noble gases also have many different everyday applications. For instance, they are often used in the creation of light sources because of their nonflammability. Xenon and radon are also used in the medical industry.

What are the properties of noble gasses?

What are the noble gases and what are they used for?

Noble gases are also referred to as inert gases because of there low reactivity. They are used in the medical industry and to conduct electricity. Also, in the production of light sources.

Noble gases have a low reactivity. It was once thought that they did not create compounds but that has since been proven incorrect.

What Are Noble Gases? | Properties and Characteristics of Noble Gases
Related Study Materials