A random variable, also known as a stochastic variable, means a collection of possible outcomes and their corresponding probabilities. In practical use, the meaning of random variable can be intuitively understood to be a variable that may take on different values randomly but whose value is not known.

is as a set of possible outcomes, called a sample space, along with a probability distribution function that assigns specific outcomes or groups of outcomes to numbers between 0 and 1 that represent probabilities.

The outcome can represent an event that will happen in the future, like the result of rolling a 6-sided dice. In this example, the sample space is the set of integers from 1 to 6, with each integer corresponding to one side of the dice. For a fair dice, the probability of each of these outcomes is 1/6.

Consider the example of rolling six-sided dice. The sample space S is a finite set of six integers:

Finally, consider flipping a coin repeatedly until it first comes up heads. The random variable representing the number of coin flips required to get heads has a sample space that is all of the positive integers (the natural numbers): 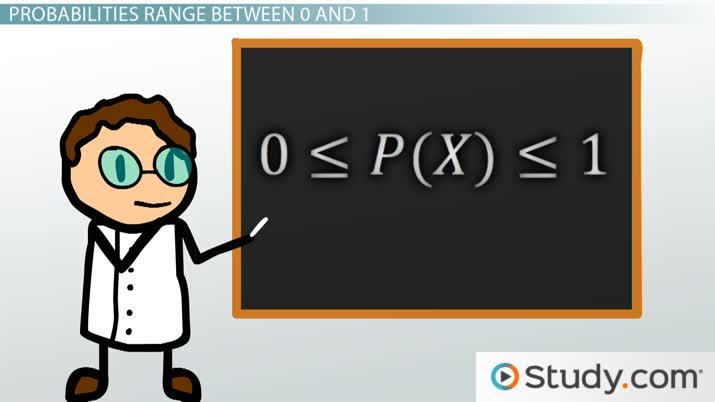 Coming up next: Finding & Interpreting the Expected Value of a Discrete Random Variable

What is a Discrete Random Variable?

In the example above, where a coin is repeatedly flipped until heads come up, the sample space of the number of flips this takes is countably infinite, and therefore this random variable is classified as discrete according to the definition of a discrete random variable.

The probability distribution function P gives the specific probabilities of the different outcomes. The probability that a person gets heads on the first coin flip is 1/2, so this means that P(1) = 1/2, as shown in this histogram.

What is a Continuous Random Variable?

A continuous random variable is defined as a random variable for which the sample space is uncountable. Usually, this means that the random variable can take on values from a range of real numbers. One example could be a person's systolic blood pressure. This is measured as a positive real number, and a typical value is approximately 120 mmHg.

Suppose a dart is thrown at a dartboard with a radius of 1 meter, and it lands at some point on the board. The random variable representing the distance from the center must be some number between 0 and 1 meters. Therefore the sample space for this random variable example is the interval of the real number line {eq}S = [0,1] {/eq}

This means there is a probability of 0.36, or a 36% chance, that the dart will land within this range.

Events can also be collections of ranges. In general, in a continuous sample space, an event is an open subset of a sample space or any countable union or intersection of open subsets, along with their complements. This means that ranges can be conjoined using logical operators like OR, AND, and NOT to yield other events. For example, the chance of the dart landing within 0.1 meters OR greater than 0.9 meters from the target is an event with an associated probability. It can represented as {eq}P(x < 0.1 \text{ OR } x > 0.9) {/eq}, and has a probability of

What is random variable and its types?

A random variable is a function that associates certain outcomes or sets of outcomes with probabilities. Random variables are classified as discrete or continuous depending on the set of possible outcomes or sample space.

How to identify a random variable?

A variable is a random variable when it is meant to represent the outcome of some random event. Usually, it is denoted by a capital letter, like X or Y.

How to Apply Discrete Probability Concepts to Problem Solving

Elements of a Business Impact Analysis

Finding & Interpreting the Expected Value of a Discrete Random Variable

Hypothesis Testing for a Proportion

Finding & Interpreting the Expected Value of a Continuous Random Variable