What is ambiguity? Ambiguity is the quality of having multiple meanings or multiple possible interpretations. If something is ambiguous, it might be understood in two or more different ways. It is essential for media literacy to spot ambiguity and parse it, as examples of ambiguity exist in literature, poetry, film, news media, and even conversation.

According to the Merriam-Webster dictionary, the ''ambiguous'' definition is something that is ''able to be understood in more than one way'' or that has ''more than one possible meaning.'' Something ambiguous can also be something that is not clearly expressed or understood. ''Ambiguous'' is the adjectival form of the word, while ''ambiguity'' is the noun. It is important to note that ambiguity can be deliberately created by a speaker or writer or created unintentionally through vagueness or mistaken meaning.

At the sentence level, two types of ambiguity can easily trip up readers. These are called lexical and syntactic ambiguity. Lexical ambiguity refers to unclear or plural meanings in individual words. Such ambiguity is often the source of comedy, as in the following examples:

Other examples of syntactic ambiguity include sentences that can alter their meaning through punctuation. For instance, consider this joke: A panda walks into a bar. He eats a sandwich, shoots the waiter, and then leaves. The restaurant patrons are surprised to see a panda acting so strangely, but when they look pandas up in a badly punctuated encyclopedia, they find an entry that says that a panda ''eats, shoots and leaves'' instead of the correct punctuation, which would be ''eats shoots and leaves.'' Another example is the difference in meaning between the sentences ''Let's eat Grandma!'' and ''Let's eat, Grandma!'' 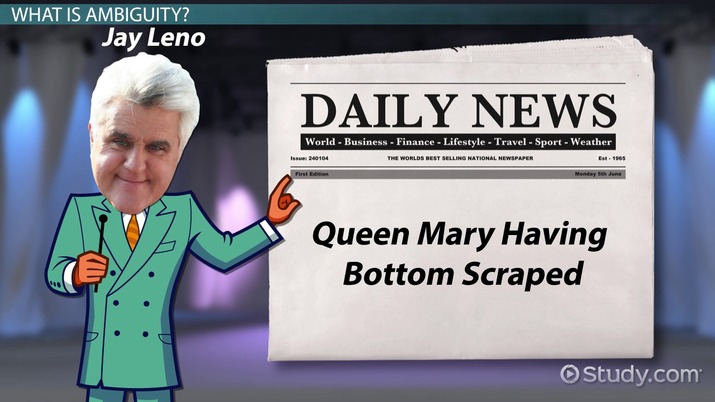 Coming up next: Fable in Literature: Definition & Examples

There are hundreds of ambiguity-examples found in literature, poetry, and even conversation. There are also many reasons why people make use of ambiguity. Some do so unintentionally in conversation, creating confusion. Others use ambiguity in their writing to create humor, mystery or leave elements of a work open to multiple interpretations. Some writers have even used ambiguity to avoid censorship. Ambiguity serves many purposes, and it cannot be ignored: it demands that readers either choose an interpretation or deliberately accept the ambiguous nature of an idea.

There are many reasons writers include ambiguity in their work and many different effects that ambiguous writing can have on readers.

Just as there can be ambiguity in literature, filmmakers often employ ambiguity to significant effect. A famous example of ambiguity in cinema is the ending of Inception (2010), directed by Christopher Nolan. The film's final shot casts doubt on whether the protagonist is experiencing real life or whether he is still in the dream world in which much of the film is set. Ambiguity is also often used at the ending of horror and thriller movies to make it unclear exactly what fate awaited the characters. The Thing (1982), Saint Maud (2019), and Annihilation (2018) all have ambiguous endings that leave audiences asking questions.

Ambiguity in poetry is perhaps even more common than ambiguity in literature, as poetry is built on figurative language and is usually open to interpretation. Examples of ambiguous poems include:

Poems are well suited to ambiguity because of their figurative nature and because it is common for poets to leave certain things unsaid so that audiences can fill in the gaps for themselves.

Some ambiguity examples are prevalent in everyday conversation. Often, these examples are instances of lexical or syntactic ambiguity. They can impede meaning and cause comprehension issues. Examples of such ambiguity include sentences like ''I saw her duck,'' which could mean that someone saw a girl duck down or that they saw her pet duck. Another ambiguity that can creep into the conversation is garden path sentences because they lead the listener up the garden path or confuse them. These sentences rely on ambiguity, usually of verbs and adjectives. Examples include:

Other forms of ambiguity can come from the structure of English. Telling someone ''we are going to the movies tonight,'' might prompt them to ask, ''you and me, or you and your wife?'' This is due to the ambiguity inherent in the pronoun ''we,'' which does not specify who is included and who is excluded.

Ambiguity occurs when more than one possible interpretation of a sentence, word, or piece of writing or media exists. Writers might use ambiguity to enrich their work, allow for multiple interpretations as a form of artistic expression, or even help audiences connect to a topic in various ways. Ambiguity cannot be ignored and must usually be analyzed to form an interpretation. In literary works and poetry, ambiguity can occur in characters' actions, words, and the use of symbols and figurative language.

Newspaper headlines may fall prey to ambiguity with phrases like ''Eye Drops Off Shelf'' or ''Kids Make Nutritious Snacks.'' Ambiguity also occurs in everyday conversation through the use of unclear pronouns, garden path sentences, or lexical or syntactic ambiguity. These forms of ambiguity can be confusing, bothersome, or humorous, depending on context.

What does ambiguity mean?

What are some examples of ambiguity?

What is an ambiguous sentence?

An example of an ambiguous sentence might be ''James got lunch ready for his daughter wearing a summer dress.'' The sentence is not clear on whether James or his daughter is wearing the dress.

Ambiguity in Literature Examples | What is Ambiguity?
Related Study Materials

How to Answer Multiple Choice Questions About Literature: Test-Taking Strategies

Oxymoron Purpose & Examples | What is an Oxymoron in Literature?