heidi Kent, Laura Nappi
Learn basic information about what an element is, what they are made of, how and why they are different, and how scientists have organized them into the periodic table. Updated: 12/13/2021

What is an Element?

Some people wonder if elements and chemicals are the same. The answer is: sort of. Elements are chemicals that are made of just one kind of atom. However, chemicals can be pure substances, mixtures, compounds, etc. If something is matter, it is made up of chemicals. 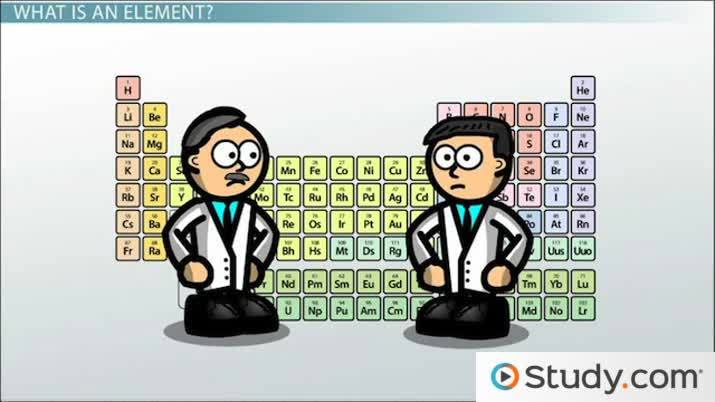 Coming up next: Atomic Number and Mass Number

What are Elements Made of and What Do They Look Like?

Elements are made of tiny units called atoms. Within each atom are subatomic particles called protons, neutrons, and electrons. The diagram below is a simplified sketch of an atom of helium (the element used to float party balloons). Atoms are made of 2 parts--a dense center and an outer, nearly empty zone around it.

Some substances like gold or helium can exist in their pure element form, but most substances are made of combinations of different elements. The sugar we add to our cereal can be broken down into elements of carbon (C), hydrogen, and oxygen. Table salt is made of the elements sodium (Na) and chlorine (Cl). The air we breathe is a mixture of elements like oxygen, nitrogen (N), and carbon. It is the combinations of elements that makes up the many substances in our world, as simple as water and as complex as DNA.

There are 118 elements that scientists know of in our universe; 92 are natural elements and 26 have been artificially created in labs and exist for only very short periods of time. The Periodic Table organizes all the elements handily into rows, columns, periods, and other categories based on similar properties. Each element on the table is also identified by its chemical symbol of 1-2 letters and its atomic number derived from the number of protons it has. Most periodic tables will include at least this basic information, but other versions can contain much more information.

What Makes Each Element Different?

Elements are different from each other because each one contains a different number of subatomic particles--protons, neutrons, and electrons. However, the basic atomic structure, with its nucleus and electron cloud, is the same.

The lightest and most abundant element in the universe is hydrogen. It has the atomic number of 1 because it has just 1 proton. It also has 1 electron and 0 neutrons. Helium, the second element, has 2 protons, 2 electrons, and 2 neutrons. Hydrogen and helium are both gases and their atoms might seem very similar in their numbers of protons and electrons; however, hydrogen is flammable and highly reactive while helium is much more stable. The third element on the table is lithium (Li) with 3 protons and 4 neutrons and 3 electrons. It is typically a solid and is highly reactive. There seems to be very little difference in these 3 elements considering the infinitesimally small sizes of atoms and their even smaller subatomic particles. But those very tiny differences are what make each element unique.

There are two main categories of elements notable on the Periodic Table: the metals and the non-metals. Most elements are metals, which means they are typically solid at room temperature, are good conductors of heat and electricity, and are shiny and flexible. The non-metal elements can be solid or gas, are poor conductors of heat and electricity and are dull and brittle. The characteristics of each element are a matter of how many subatomic particles it contains.

All matter in the universe is made of elements. Elements are pure substances that can not be broken down further into any other substances. All of the known elements are made of atoms and each atom is different. Each element has a different number of protons, neutrons, and electrons from all other elements. This is what gives them their properties and characteristics.

The Periodic Table organizes all the elements very specifically into rows, columns, periods, etc. Each of the known 118 elements is assigned an atomic number that is identical to the number of protons it has. This is also the number of electrons the element has and determines many properties of the element, including how it may interact with other elements. The countless possible combinations of elements create all of the matter in the universe. Scientists continue to study and learn more about elements, atoms, and the behavior of their amazing subatomic particles.

What is an element for Class 7?

The elements in Group 7 are called the halogens. They are highly reactive non-metals. They include fluorine, chlorine, bromine, iodine, and astitine.

What is an element easy definition?

Elements are the smallest particle of a pure substance that can't be broken down into any smaller substance. Each element is made of a different kind of atom. There are about 92 elements that occur naturally and others that are artificially created in a lab for a total of around 118.

What does element mean in science?

An element is a pure substance made of only 1 type of atom that can not be broken down further into other substances.

What are 10 elements examples?

Compounds and mixtures like water or stainless steel are not elements. But they are made of elements.

Mixtures of Elements & Compounds | How Does a Compound Differ from a Mixture?

What Is Gravity? - Definition & Equation