What is Atomic Mass?

Atoms are the smallest units of elements, or the simplest substances that cannot be broken down further chemically. Both atoms and elements are organized onto a display called the periodic table of elements.

Atomic mass is the total mass of particles of matter in an atom, i.e., the masses of protons, neutrons, and electrons in an atom added together. However, electrons are so small that they are negligible when finding the mass of an atom. Therefore, the atomic mass of an individual atom can be said to equal the total number of protons and neutrons. For example, fluorine atoms typically have 9 protons and 10 neutrons, and therefore have an atomic mass of 19 amu. When describing atoms and elements, there are three other numbers that may be present in a periodic table: atomic number, mass number, and average atomic mass.

So, carbon has an atomic number of 6 and a mass number of 12. Plugging those numbers into the formula allows one to determine that carbon atoms usually have 6 neutrons.

When looking at a periodic table of elements, there is a number under each element that has decimal places. This is the average atomic mass of that element. Atoms of the same element always have the same number of protons but can vary in their number of neutrons. So, each element will have different isotopes, or atoms of the same element that have different numbers of neutrons. When looking at carbon on the periodic table, it says carbon has an average atomic mass of 12.011 amu. This number is determined by the fact that in any sample of carbon there are some atoms of carbon that have masses of 13 amu and 14 amu because carbon-13 atoms have 7 neutrons and carbon-14 atoms have 8 neutrons. 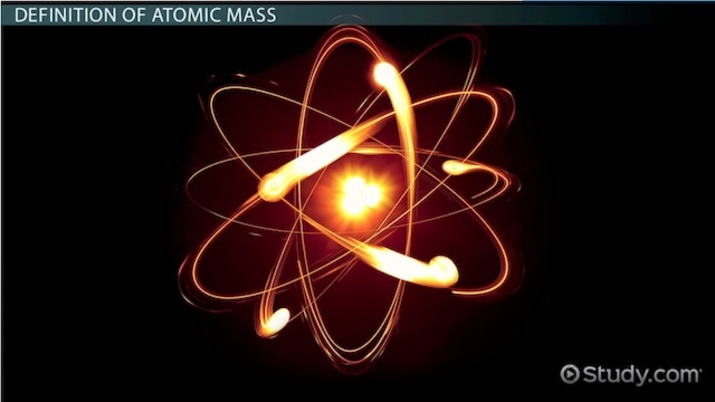 Coming up next: What is Chromium? - Facts, Foods, Benefits & Side Effects

How to Find the Atomic Mass of an Atom

Atoms are too small to observe by shining light on them and seeing them under something like a microscope. Therefore, one of the only ways we can observe atoms and how they differ is through measuring their masses. Any sample or piece of something can be put into a mass spectrometer which will separate all the atoms by taking advantage of their different masses, and then provide the elemental composition of the sample.

In more detail, a mass spectrometer first vaporizes a sample so that all the atoms float freely, then ionizes the sample or changes the charge of each atom by adding or taking away electrons. Next, the now charged atoms are sent through a chamber that influences the sample with an electromagnet. Because each atom is charged the electromagnet will affect and move each atom. Additionally, because the sample might be made up of different atoms of different masses, each atom will be influenced by the electromagnet based on their masses and inertia - so that each atom ends up in a stream of other atoms of the same mass. Once the atoms are separated into streams, they are captured and detected by a system that then measures the mass of the stream and calculates what percentage of the sample is made of which elements and isotopes. Being able to measure the atomic mass of atoms and therefore identify the atoms that make up a substance or sample has become extremely useful among many disciplines in science. By identifying the atoms that make up a sample, scientists can consequently use a mass spectrometer to date samples by using a method called radiometric dating. One of the most accurate radiometric dating methods is uranium-lead dating.

Some atoms of certain atomic masses are unstable and will decay over time into another atom and element. For example, uranium-238 atoms decay into lead-206 atoms at a rather definitive rate. Uranium is a radioactive element. Radioactive elements undergo decay and have something called half-life. Uranium-238 has a half-life of 4.47 billion years, which means half of any sample of uranium-238 will decay and become lead-206 after 4.47 billion years. Scientists can use the half-life of uranium, and its ratio to lead in a sample to determine the age of the sample.

Examples of the Application of Atomic Mass and the Mass Spectrometer

How do we find atomic mass?

What is the simple definition of atomic mass?

Atomic mass is the total mass of the subatomic particles in an atom and is measured in atomic mass units (amu).

What is Atomic Mass? | Definition and Examples
Related Study Materials

Distinguishing Between Inertia and Mass

What is Trigonometry? - Functions, Formulas & Applications

How to Convert Grams to Amu

What is Potential Energy? - Definition & Examples