Brittany W., Adrianne Baron
What is bile? Learn the definition, components, and functions of bile. Learn how it helps in fat digestion and absorption, and its secretion and production. Updated: 08/30/2021

Bile is defined as a greenish-yellow fluid that breaks down fat into fatty acids for absorption by the digestive tract. The word bile comes from the Latin word bilis meaning "fluid secreted by the liver." Bile is made in the liver but stored by the gallbladder. It gets its greenish-yellow color from the pigments biliverdin (green) and bilirubin (brownish-yellow). Both pigments are molecular byproducts of hemoglobin degradation in red blood cells.

Bile was first discovered by a German chemist named Heinrich Otto Wieland. In 1927, he was awarded a Nobel Prize in Chemistry for investigating the role of bile salts in the human body.

Bile salts, also called bile acids, are a major constituent of bile. They are made from cholesterol in the liver. Conjugated bile salts are those that form amide bonds with amino acids. Since bile's discovery, it was believed that conjugated bile salts only formed bonds with the amino acids taurine and glycine. However, it was recently discovered that gut microbes have the ability to conjugate bile salts with many other amino acids. This new discovery fundamentally changes the scientific community's understanding of mammalian bile. At the time of writing, additional study is taking place to understand bile's additional roles and functions in the body.

As mentioned, bile salts are just one component of bile. As a percentage of total solute, bile contains:

Overall, the total solute represents approximately 5% of bile with water constituting the rest. 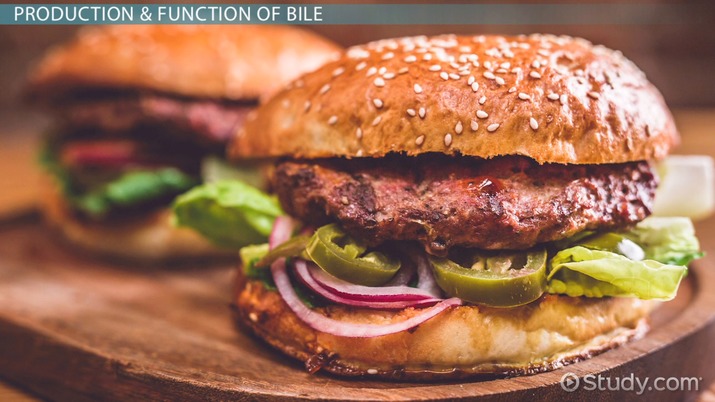 Coming up next: Homeostasis and Temperature Regulation in Humans

Bile is secreted by both the liver and gallbladder; however, the gallbladder is bile's only storage unit. There are two stages of bile secretion:

An adult human liver produces approximately 400 to 800 milliliters of bile per day.

There are many factors that regulate the release of bile. Secretin is a digestive hormone released by the duodenum, the first portion of the small intestine. It is released in response to acidic foods in the gastrointestinal tract. Secretin initiates a series of pathways, including bile production by the liver, with the ultimate goal of neutralizing acidic foods after consumption.

Cholecystokinin (CCK) is an enzyme made in the pancreas and released by the small intestine when high fat and high protein food is consumed. CCK initiates contractions in the gallbladder to release bile. Somatostatin is a hormone produced by the nervous and digestive systems that inhibit bile release by blocking the release of cholecystokinin. Stimulation from the vagus nerve is also required for bile secretion from both the liver and the gallbladder. Gastrin is another hormone that increases both bile release as well as digestive proteins from the pancreas. Digestive enzymes, like lipase, are important because they break down fatty acids in bile so they can be absorbed through the digestive tract.

There are two major purposes of bile:

Bile salts are responsible for taking fat consumed as food and breaking them up into small fat droplets of fatty acids that are easily absorbed. This is called emulsification.

There are two forms of waste excreted by the body: urine and feces. The liver plays a significant role in detoxifying the body. Many of those toxins end up in bile so they can either be excreted through the gastrointestinal tract as a bowel movement or reabsorbed in the blood and excreted as urine.

Waste products of bile include:

Recently, bile salts have also been found to act like hormones in the body. Bile salts can bind to nuclear receptors (receptors in the nucleus that affect gene transcription) in two ways:

Ultimately, both hormonal roles serve to reduce the number of active bile salts in the body once sufficient numbers have been reached.

The role of bile's additional functions are as follows:

Bile is an alkaline substance that breaks down fat into fatty acids and assists with the digestion of fat in the small intestine. It is produced by the liver and stored in the gallbladder. Cholecystokinin (CCK) is an enzyme made in the pancreas and released by the small intestine to promote the release of bile from the gallbladder. Bile gets its greenish-yellow color from the pigments biliverdin and bilirubin, which are produced from the breakdown of hemoglobin in red blood cells. Bile salts, also called bile acids, are a major component of bile. They help disperse fat by surrounding fat droplets and forming sphere-like carrier configurations called micelles. The dispersion and suspension of fat in a solution is called emulsification. Bile breaks down fat into fatty acids while digestive enzymes like lipase help the digestive tract absorb them.

How does bile help digest fat?

Bile digests fat by breaking it down into fatty acids and dispersing it throughout the digestive tract for digestive enzymes to process.

How is bile created?

Bile is created by the liver and consists of many components. These components come from cholesterol, dead or damaged red blood cells, and accumulated waste products.

What are the three main functions of bile?

Bile has many functions, but the three main ones are to aid in the digestion of fat, rid the body of waste, and act as a buffer to neutralize acidic compounds.

What is bile made of?

Bile is made up of approximately 95% water. The remaining 5% percent consists of bile salts, fatty acids, cholesterol, protein, bilirubin, phospholipids, and other compounds.

What does having a bile mean?

"Having a bile" refers to the act of releasing bile from the liver and gallbladder after food is consumed. Bile enters the small intestine to break down fat and fat-soluble vitamins.

Is bile good or bad?

Bile is good. It assists with properly digesting fat through emulsification and assisting with absorption. It also helps with ridding waste out of the body.

Nursing Assessment of the Cardiovascular System

CSF Function & Composition | What is CSF?

What is the Function of the Liver? | Liver Location, Parts & Structure

Physiology of the Stomach and Gastric Juices

What Is the Pancreas? - Function, Enzymes & Role in Digestion

What is Dopamine? | Dopamine Function & Effects on the Brain