What is Ecological Succession?

Terrestrial ecosystems change over time, especially after a disturbance, in a process called ecological succession. Ecological succession's definition is best described as the changes in a terrestrial area over time through the colonization of organisms after a large disturbance. As the colonization of the area occurs, organisms within the ecological community will replace each other as the ecosystem itself changes; grasses will give way to shrubs, which will give way to trees. 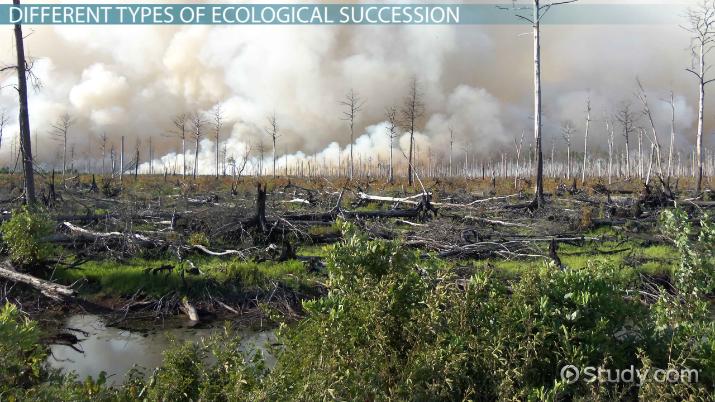 Try it now
Back
Coming up next: Renewable & Non-Renewable Resources: Definition & Differences

There are different types of ecological succession. Which type an ecosystem is undergoing will depend on starting events, what is already present and the time of year.

Primary Succession occurs when there has been no previous life in an area; it starts with bare rock. This type of succession happens after a volcanic eruption or glacier retreat. The area is only barren rock with no soil, vegetation or animal life. Once the rock or lava is exposed, bacteria and lichen start to colonize the area. The cellular processes of the bacteria and the decomposition of the lichen and mosses begin to create a thin soil. Over decades, plants and animals will being to inhabit the area in large numbers.

Secondary Succession occurs when an already inhabited area is disturbed, removing most of the organisms, and needs to be recolonized. This often happens after a natural disaster like a wildfire, drought or flood. Human disturbances, like logging and farming, can also cause secondary succession to occur. During this type of succession, the area the organisms have been removed from will return to its pre-disturbed form quicker than in primary succession. The presence of soil and surrounding plant and animal life allows the area to be recolonized faster.

Seasonal Succession occurs due to the cyclic nature of the seasons found in an area. On the eastern coast of the United States, this can be seen with the changes in the tree canopy through winter, spring, summer and fall. While there are no leaves on the trees throughout the cold and darker winter, shoots and buds appear in the spring as the temperatures rise and the days become longer. Full growth and fruiting happens in the summer and as the temperatures start to drop so do the leaves in the fall.

Generally, ecological succession has four main stages which are determined by the processes occurring and the types of organisms colonizing the space.

Why Do Ecological Successions Occur?

Ecological succession occur whenever a large disturbance causes drastic change in an ecosystem. Be it lava flows, wildfires, flooding, hurricane damage or human-caused destruction, the disturbance triggers changes in the ecosystem. This is an important part of ecosystem ecology, as it allows ecosystems to bounce back after natural disasters and brings ecological equilibrium to an area. Without succession, natural communities would not reach the energy balance needed to support large numbers of organisms in a complex food web. By changing over time and creating relatively stable climax communities, ecosystems allow for biological diversity to flourish and species interactions to evolve.

Ecological Succession is the changing of a terrestrial ecosystem over time after a large disturbance. Unlike ecological evolution, the type and number of species present changes, not the genetic makeup. There are three types of ecological succession:

During the four stages of succession, different types of organisms can be found, which helps direct the changes in the ecosystem. The first organisms to colonize an area are usually r-selected species like lichen, moss, insects and grasses that produce multiple offspring but give no parental care. These add nutrients to the ecosystem and start cycling them so that larger, k-selected species can inhabit the area. These organisms have fewer offspring and give large amounts of parental care and rely on the nutrients and the emerging diversity of the ecosystem in order to survive.

Climax communities are often able to establish themselves if the ecosystem is left undisturbed long enough to create a stable system of producers and consumers. This ecological equilibrium occurs when there is enough energy in the ecosystem to support the numbers of consumers and producers found throughout the food web. Climax communities are often thought of as forests, but deserts and prairies are also examples.

The Story of Succession

During this activity, students will be drawing a storyboard to illustrate each of the stages of ecological succession. For example, students might choose to illustrate primary succession in a quarry after mining operations have ceased. In their first panel, they might illustrate the mine being shut down, and in their second panel, they might show seeds being blown in from neighboring ecosystems to start the process of succession. Each panel should also have a short description of what is happening.

Now that you're familiar with ecological succession, it's time to put your knowledge to work. In this creative activity, you'll be creating a storyboard that shows each of the stages of ecological succession, either primary or secondary. Start by choosing a location, such as a forest after a fire, an abandoned mine, or an island after a volcanic eruption. Then, lay out a panel for each of the stages and start illustrating. Each panel should also have a short description of what is going on in that stage. To make sure your story board has all the required elements, review the criteria for success below.

What are the stages of succession in order?

What are the 4 stages of primary succession?

What is Ecology? | Ecology Examples & Types

What is Ecology? | Ecology Examples & Types