What is English Literature? 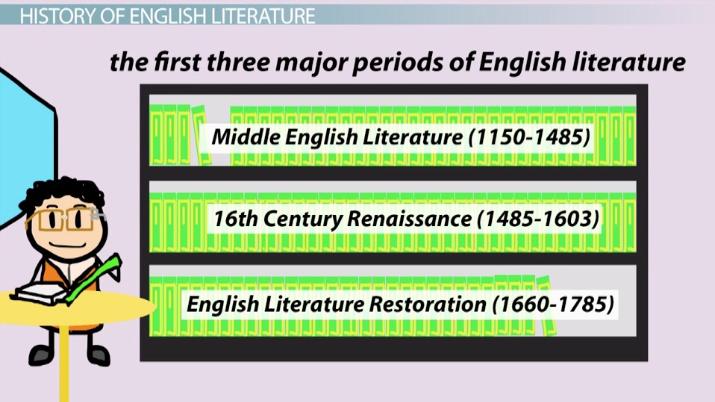 Coming up next: James Joyce's The Dead: Summary & Analysis

Today, English literature is one of the most popular college courses around the world. An English literature definition includes writers from Britain, Ireland, America, Canada, and many other regions where English is spoken. Because English literature dates back so many centuries, it can be helpful to look at different eras to get a sense of how literature has evolved over time and what the most important works of each era were. The dates given below are not set in stone but are instead guidelines that can help differentiate time periods.

Before English evolved into its modern form, it was actually so different that contemporary English speakers could not possibly understand it. This language is called Old English, and it is in Old English that the earliest works of English literature were written. The earliest surviving work of English literature is a poem called Beowulf that was probably first written in around 700, though it probably existed as an oral story for much longer. Old English writing looks like this:

So. The Spear-Danes in days gone by
and the kings who ruled them had courage and greatness.
We have heard of those princes' heroic campaigns.

Because literacy rates were low and stories were often passed down orally, Beowulf's lines are alliterative to make them more memorable. It is unknown who wrote Beowulf, but it is thought that the earliest surviving version was either written or heavily edited by some monks. Other notable works of Old English literature include Caedmon's Hymn and The Dream of the Rood.

Middle English was a midway point between Old English and contemporary English. While it is still quite different from the English that most people are familiar with today, it is more or less readable for contemporary English speakers. At this point in Britain, the common people were speaking Middle English, but the nobility mostly spoke French. For that reason, as well as low literacy rates, few works of English literature were produced for some time. The most notable author of this time period is Geoffrey Chaucer (c. 1340-1400). Chaucer was a poet who defied tradition by writing his works in Middle English instead of French. His magnum opus was The Canterbury Tales, a series of stories told in verse about a group of people on a pilgrimage together. The stories are at once amusing and moralizing. His writing looked like this:

Experience, though noon auctoritee
Were in this world, were right y-nough to me
To speke of wo that is in mariage

This is the beginning of one of Chaucer's most famous stories: The Wife of Bath's Tale. In addition to Chaucer, another Middle English writer of note is Thomas Malory, who wrote Le Morte d'Arthur in 1485. This was a retelling of the myth of King Arthur and the Knights of the Round Table. As with Old English works, some Middle English works are anonymous or survive only in fragments.

The term ''Renaissance'' means ''revival'' or ''rebirth.'' It was a movement that swept across Europe over the course of several centuries. It was a time of social change where people's lives were altered by urbanization and agricultural advances. By far the most influential writer of this period is William Shakespeare (1564-1616). Shakespeare authored at least 38 plays and 154 sonnets during his career, many of which are still widely read, studied, and performed around the world today. The influence that Shakespeare had on English literature and the world, in general, was profound and essentially unprecedented. His famous plays include Macbeth, Romeo and Juliet, and Much Ado About Nothing.

While Shakespeare was extremely influential, there were many other English Renaissance writers of note, including:

Many of the major forms of English poetry and literature were developed during this time and all of these writers are still widely read today.

In 1649, the English monarchy was abolished and the country was ruled by Oliver Cromwell, who held the title of Lord Protector. In 1660, the monarchy was re-established, leading to a period in English history called the Restoration. Because of the political instability in England at this time, some of the most popular literature was written as a form of protest. A major writer of this era was the Irish satirist Jonathan Swift (1667-1745), who frequently criticized elements of European society in his works. His satirical essay A Modest Proposal and his famous novel Gulliver's Travels were both popular when they were first published and they are still studied today. Other writers from this time include:

Samuel Pepys is particularly interesting because as a diarist, he had the opportunity to directly record his experiences during the Great Fire of London. This has proved to be an extremely useful primary source for historians who want to know exactly what the fire was like, as well as other details of daily life that other people might not have thought to record.

Romanticism was a literary movement that worked to deconstruct existing literary conventions to create a new kind of literature. The Romantics valued individual expression, heightened emotions, and an appreciation for the beautiful and the sublime. Romantic literature sometimes had neoclassical elements and often featured an appreciation for the natural world. As a movement, Romanticism was most prominent in England and later in America. It was also an artistic and social movement. The Romantics tended to be supportive of popular freedom movements like the French Revolution. Important Romantics include:

Mary Shelley's Frankenstein is generally considered the first work of science fiction and a major literary accomplishment. Many Romantic poets, including Mary's husband Percy, unfortunately, died young, either due to illness or accident. Their poetry is often tinged with an awareness of mortality.

Queen Victoria reigned from 1837 to 1901 and her reign was a particularly notable time for English history. Rapid social changes and relative political stability characterized the era. People were living in the heart of the Industrial Revolution, which strongly influenced literature. One of the most important writers of the period was Charles Dickens (1812-1870), whose long novels exemplify life in the Victorian era, particularly because of his focus on poverty and social class in novels like David Copperfield and Oliver Twist. Other writers of note include:

While all of these writers were important, it is unlikely that any had more of an impact on Victorian society than Oscar Wilde. Known for his witty plays and for writing The Picture of Dorian Gray, Wilde was also famous for having an extremely heavily publicized trial and subsequent imprisonment that changed social mores in Victorian society.

Twentieth-century literature was extremely varied and cannot truly be summed up in only a paragraph or two. The twentieth century featured colonialism on the part of the British Empire, which influenced writers like Joseph Conrad (1857-1924), who wrote Heart of Darkness. Another essential literary movement from this time period was Modernism, which was characterized by a rejection of convention and an exploration of the human psyche. Major Modernist writers include:

The twentieth century saw more books published than any previous century, many of which joined the canon of English literature. Hundreds of writers left their mark on the century and their influence is still being felt today.

Twenty-first-century literature is, of course, still being written. Many writers today are responding to contemporary political injustices, climate change, and technological changes. Some of the most influential writers and works of the twenty-first century so far include:

The twenty-first century has already seen major changes in English literature. Writers from more countries and backgrounds than ever before are contributing to the canon and more and more innovative genres are being created and developed all of the time.

Studying English literature is particularly important because it can teach people about the past while also dealing with universal themes and values.

What is the simple definition of literature?

Literature is a general term for written works, including novels, short stories, poems, and essays. The study of English literature looks at all of the most important works written in English over the centuries.

What is the brief history of literature?

Is there a single definition of literature?

Generally speaking, literature refers to all books, poems, essays, and short stories. However, it can also be used to refer specifically to works of greater artistic merit. The term is flexible and can be applied in various ways.