chase smith, Emily Lockhart
Learn about the hydronium cation, which has the chemical formula H3O+. Understand the definition of hydronium ion and the formula for calculating hydronium ions. Updated: 12/01/2021

The product of {eq}H_{3}O^{+} {/eq} is referred to as the hydronium ion. Due to its positive charge, hydronium is classified as a cation. Cations have achieved their positive charge by donating an electron to a solution, leaving the cation having fewer electrons than it has protons. This lack of electrons leads to a positive overall charge. Any time a neutral atom gains or loses electrons, the resulting particle is referred to as an ion.

A picture of a hydronium ion can be seen here:

In this image, it can be seen that there are 3 hydrogen atoms and 1 oxygen. Since oxygen atoms will traditionally form -2 charged ions, and hydrogen typically forms +1 ions, the resulting charge of this combination of atoms equals a +1 charge. 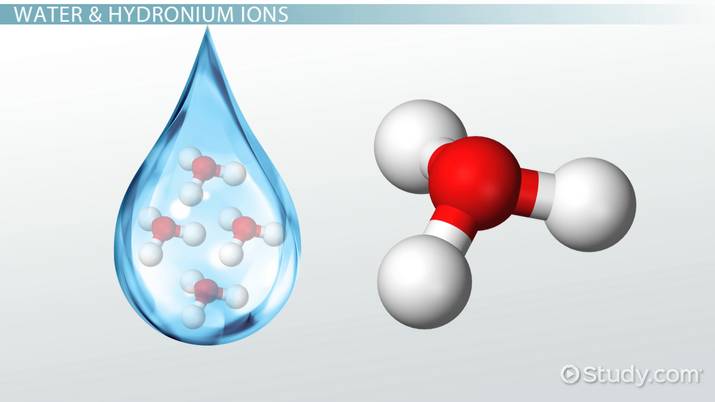 Coming up next: Rules for Naming Ionic Compounds

Using math to calculate, the pH of a solution can be calculated using the following equation:

The hydrogen ion in this formula is easily replaced with the hydronium ion, as they are interchangeable when referencing acidic solutions.

The log scale makes calculating the pH of a certain concentration of an acid very simple in many circumstances. For example:

A pH scale ranges from 0 being the most acidic up to 14 being the least acidic. Any solution that has a pH greater than 7 is said to be basic.

In situations in which the concentrations are not 1x10 raised to the power of an exponent, using the -log function will also accurately calculate pH as well.

Depending on what needs to be calculated and which information is given, an alternative method of calculating hydronium ion concentration is available also. If a problem occurs in which the pH is known and the request is for the hydronium concentration, the following equation can be used to calculate the concentration:

This formula would certainly need the use of a calculator in order to determine a solution, but it can be very useful.

Hydronium is classified as a cation due to its positive charge. The positive charge stems from a loss of an electron in order to form the ion. Hydronium has 1 less electron overall than it does protons.

Several equations are vital to understanding the calculations involved with pH and hydronium ion concentrations.

This would be used to calculate the concentration of either hydronium ions or hydroxide ions given one of the two.

This equation would be used to calculate the pH of a solution given the hydrogen/hydronium ion concentration.

This equation would be used to calculate the hydronium ion concentration of a solution when given the pH.

Conversely, although pH is the more commonly used measurement, in basic solutions, the hydroxide ion concentrations can easily be calculated with these formulas as well.

Yes. Hydronium is a cation that has a formula of H3O+. Since it has a positive charge, it classifies as a cation.

H3O+ is extremely similar to H+, but they should not be considered identically the same thing. H3O+ only is present in aqueous solutions, while H+ ions can occur in several different circumstances.

H3O+ is the sign of an acid being present. The concentration of H3O+ determines the magnitude of the acidity of a solution.

What is the proper name for H3O+?

H3O+ is most commonly referred to as a hydronium ion. It occurs when a hydrogen ion combines with a water molecule.

What is the hydronium ion formula?

Hydronium is a cation that has a formula of H3O+. It often is made from a water molecule combined with a positively charged hydrogen ion.

Is hydronium a cation?

Yes. Hydronium is a cation that has a formula of H3O+. Since it has a positive charge, it classifies as a cation.

What is Alkaline Water? - Definition, Benefits & Side Effects

What is Cyanide? | Formula, Characteristics & Effects