Chelsie Wheeler, Peggy Olsen
Learn about imprinting in psychology and learning. Discover imprinting in animals, signs of imprinting, and how sexual imprinting may influence speciation. Updated: 11/11/2021

Imprinting is an inherited trait that some animals use as a means of survival. Imprint is defined as a behavioral trait that altricial animals experience hours after being born where they develop an extremely close bond with the animals they first meet, usually their parents. 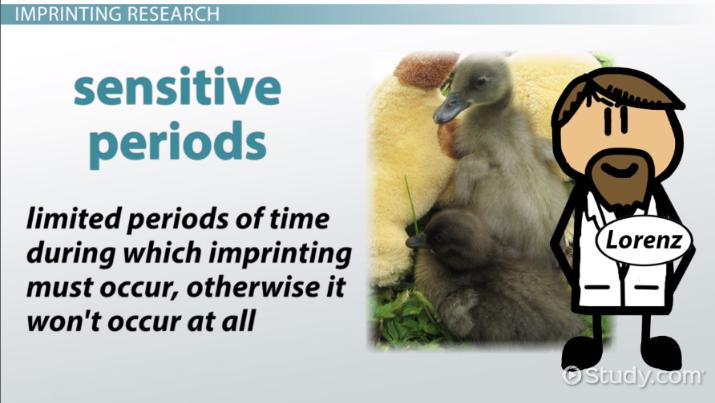 Coming up next: Instinct: Definition & Explanation

What Is Imprinting in Psychology?

Imprinting is a definition in psychology used to describe the behavior of certain types of newborn animals. It involves a specific set of learned or formalized connections or aversions that are established within a specific time frame after exposure.

Imprinting is a topic within the subset of ethology. Ethology is the scientific study of behavior in animals.

Konrad Lorenz: What Is Imprinting in Animals?

Altricial animals form a deep connection with their parents to ensure their survival. This is a type of evolution because it helps to ensure the fitness of the species by safeguarding the persistence of the animal's ability to pass on its DNA to the next generation.

Konrad Lorenz was a zoologist who mainly studied behavioral patterns in animals which led to his study on imprinting. He was able to link how the behavioral patterns in animals develop as a means of evolution, a way for those animals to survive as a species. Species that are born in a vulnerable state and in need of constant care from their parents are known as altricial. The concept of imprinting is based on this idea of the altricial animal's need for their parents; by forming strong attachments, they increase their chance of survival. This type of special learning can only happen for a limited amount of time after the animal is born, or it will not occur at all. These periods are known as sensitive periods of learning.

Lorenz was not the first scientist to theorize the idea of imprinting. However, he was the first to prove the idea through successful experimentation. His work included a type of imprinting called filial imprinting in birds. One example of his experiments was done using ducks, and he found that after hatching, they would imprint on any moving animal or object that was present as a means of survival. Some examples of this could be the duck's parents, a human conducting the study, or even in some cases, a red ball. He also found that depending on the item the bird imprinted on, the object or animal would affect the duck's behavior later in life, even affecting their sexual preference. This level of imprinting behavior determining sexual preference is also an evolutionary byproduct. By selecting species that are similar to those present during imprinting, the animal helps to ensure the survival of their own species.

There are a few signs of imprinting that can determine if a newborn animal has made an attachment. The main determination in Lorenz's research was tested by separating the baby animal away from its mother, the object, or animal the young assumably imprinted on. After they have been separated for an extended amount of time, the object or animal was reintroduced for the newborn to follow. If the baby followed the theorized object or animal, it would have most likely imprinted on it.

The other major determining factor in understanding imprinting is introducing similar objects or animals that resemble the animal or object the animal imprinted on when it was a baby. Because one major theory of imprinting is that animals will pick similar animals to their parent because that is the animal it would imprint on, this test can reinforce the imprinting process. However, it would be tested later in the animal's life.

There are three primary types of imprinting that have been discovered in psychological research.

Filial imprinting is the most widely known type of imprinting that influences the connection between young and their parents or siblings. This type of behavioral bond allows the young to visually imprint on their parents as a means of survival. This unique bond also ensures that the young will recognize their parent or even different members within their species which is useful for reproduction.

Sexual imprinting is a type of behavioral trait that affects an animal's inclination towards a sexual mate from learned behavior, usually very early in life. This type of imprinting behavior influences mate selection later in life. It can be altered to make an animal prone to characteristics or choose against specific features. Psychologists are exploring whether imprinting is a factor in human mate choices.

The Westermarck effect is a type of aversion imprinting that may help select against breeding. This effect is also known as reverse sexual imprinting and theorizes that people who live together, usually in a family unit, early in life will most likely not develop sexual feelings for each other.

Limbic imprinting happens before, near, or after birth and involves an animal emotionally retaining the circumstances of their birth. Even though they may not be remembered, these memories are stored in the part of the brain responsible for memory collection, emotions, and sexual feelings. This area of the brain is known as the limbic system. Because of its links with emotional behaviors, it is essential for basic survival skills, one of which, shown through limbic imprinting, involves a parent's choices and an infant's survival response.

An imprinting psychology example can be seen in each of the three types of imprinting.

An example of filial imprinting can be seen through Lorenz's research with geese. Lorenz had two separate sets of goose eggs. One set was incubated by lights; the other set would be incubated by their mother. Because the theory of filial imprinting suggests that young can imprint using visual indicators, they will imprint on the first object, person, or animal they come into contact with during their sensitive periods of learning. Therefore, the geese hatched under the incubated light would imprint on Lorenz, and those hatched under their mother would imprint on her. Another example can be seen in wolves, which imprint on their parents. The wolf species tend to use filial imprinting as a means to learn social skills, which are highly complex.

An example of sexual imprinting involves animals using their imprints from their parents to help choose a mate that is neither too closely associated with their family but similar enough to produce viable offspring. This is mostly seen in animals who often pick social tendencies or physical traits that their parents had when selecting their own mates.

An example of limbic imprinting can be seen in humans at birth. Research shows that while most humans do not claim to remember their birth story, the circumstances of their birth leave a large impact on their adult lives. Because the limbic system in the brain holds memories, good experiences are left in the brain and create the basis for emotion.

Imprinting is an inherited trait that some animals use as a means of survival that altricial animals experience hours after being born, developing an extremely close bond with the animals it first meets, usually their parents.

Konrad Lorenz was a zoologist who mainly studied behavioral patterns in animals leading to his study on imprinting. He coined the phrase imprinting to describe the instinctual learning that occurs in young animals so they can stay close to a parent. He also found that there were limited periods of time after an animal is born called sensitive periods where the young must imprint on their parent, or it would not happen. For example, if someone decided to hatch eggs and then return them to their mother after a few days, they will have imprinted on the person and not the mother.

Filial imprinting usually happens just after an animal is born when they see their parent. However, most birds, for example will imprint on whatever is present when they hatch. If chicks are incubated under a light, and the first thing they see is a cat, they will imprint on that cat. Sexual imprinting is a type of behavioral trait that affects an animal's inclination towards a sexual mate from learned behavior, usually very early in life. The Westermarck effect is a type of aversion imprinting that may help select against breeding. Psychologists are exploring whether imprinting is a factor in human mate choices. Limbic imprinting is when animals, usually humans, retain the circumstances of their birth and relate those memories to emotions later in life.

What is animal imprinting?

Animals can exhibit all three types of imprinting which include filial, sexual, and limbic. Wolves exhibit filial imprinting as a means of learning social skills of their packs. Most animals exhibit sexual imprinting as a way to choose a mate that resembles their parents. Humans show limbic imprinting at birth and carry those memories throughout their lives.

What is human imprinting?

Humans can exhibit all three types of imprinting: filial, sexual, and limbic. Filial imprinting helps infants to bond with their mothers. Sexual imprinting helps humans to find similar yet different enough mates to their parents. Limbic imprinting is when humans retain experiences of their birth in their memory and use those memories throughout their lives.

How do wolves imprint?

Wolves imprint on their parents and tend to use filial imprinting as a means to learn the social skills of their species, which is highly complex.

What is meant by imprinting in psychology?

Imprinting in psychology is a behavioral trait that altricial animals experience hours after being born where they develop an extremely close bond with the animals it first meets, usually their parents.