The definition of libel is a defamatory statement that is published in written words, drawings, cartoons, or physical representation. Legally, libel is a tort, or civil wrong, although in some states it is also viewed as a crime. Those who feel they have been harmed by another can address that harm by filing a civil lawsuit against the individual who published the false statement.

Libel law varies by state, but to prove a statement is libel, one must generally convince the court that:

Libel can occur in several situations. Here are a couple of libel examples:

In both examples, the depictions are false, and reputations have been damaged.

Often whether an action is considered libel depends on whether the false statement or representation has been published. For example, if the artist who drew the cartoon posted it on their refrigerator, but did not publish or share it with others, the individual's reputation would not have been damaged, thus no libel would have occurred. False statements written in a diary are unlikely to be considered libel unless the diary was published.

Is Libel a Crime?

Libel is a civil matter in all states, and although rarely charged, in some states, libel is a crime punishable by fines or imprisonment. Many such laws have been determined to violate the First Amendment and have been overturned in recent years. Generally, those that remain require that an individual accused of criminal libel knew that the false statement in question was false and published it with the purpose, or intent of harming the other party. Like civil libel laws, criminal libel laws cover written statements, drawings, cartoons, and other depictions. They do not cover oral statements. Unlike civil libel lawsuits, where one individual sues another over an allegedly libelous statement, criminal libel charges are filed by the government, generally with the view that the offense was so egregious that the defendant's alleged lie caused public harm. 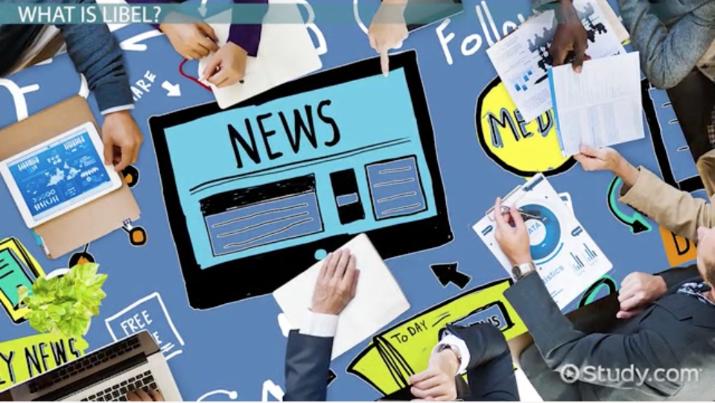 Coming up next: What is Perjury? - Definition, Penalty & Example

New York Times Co. v Sullivan is a well-known case in which L.B. Sullivan, a police commissioner in Alabama, sued The New York Times over an ad taken out by allies of Martin Luther King Jr. In the ad, King's supporters criticized the way police treated of civil rights protestors. Sullivan argued that the ad included false statements that cast him and his police department in a bad light. A state court agreed in a decision that was later upheld by the Supreme Court of Alabama. The New York Times then appealed to the U.S. Supreme Court, which in 1964 overturned the lower court decision, finding that the ruling violated the First Amendment. The ruling is important because it established requirements that make it more difficult for public officials to prove libel cases. The case is also important because it thwarted efforts by Southern officials to prevent media outlets from covering the civil rights movement.

In Gertz v. Welch, the Supreme Court clarified that although public figures must prove that an allegedly libelous statement must have been made with malice to be proven to be libel, private plaintiffs do not have to prove malice. In this instance, a police officer was tried for murder. A newspaper later wrote several stories indicating that the officer was framed for the crime by Elmer Gertz, the officer's attorney. The court found that because Gertz was not a public figure, he did not need to prove the newspaper published the statements maliciously. Gertz ultimately provided proof to the court the statements were false and won his case.

In New Hampshire v Frese, Robert Frese was arrested on criminal libel charges after posting a comment on Facebook referring to a police officer who had giving him a traffic ticket as a "dirty cop." The case was later dropped when the prosecutor determined that police may have violated Frese's First Amendment rights when arresting him. Critics of criminal libel laws say they are often used by powerful public figures to suppress citizens' right to free speech.

Libel law varies by state. Each state has different rules governing the definition of libel and defenses for those accused of libel. In most instances, to win a libel lawsuit, a private plaintiff must prove the statement was published, is false, caused or could have caused harm to one's reputation. Plaintiffs who are public figures or government officials must also prove that the defendant published the false statement with malicious intent. Private individuals who file libel suits can win damages if it is proven that the statement was published with malicious intent.

Individuals accused of libel can successfully defend themselves if the statement is true, comes from court records or other public documents or if the statement is clearly an opinion or satire. Some states also have laws to deter powerful individuals or corporations from filing libel suits to silence critics and interfere with their First Amendment right to free speech. For a suit to be considered a Strategic Lawsuit Against Public Participation, or SLAPP suit, defendants facing a libel suit must generally prove that the statements in question were true and were in relation to their petitioning or advocacy regarding an issue of public concern. In some states, victims of SLAPP lawsuit, are allowed to file a counter lawsuit against their accuser. Sometimes referred to as a "SLAPP back," those suits allow victims to collect damages from those who falsely accuse them of libel.

Libel vs. Slander vs. Defamation

Defamation is defined as any false statement that harms someone's reputation. Libel is a written or physically rendered statement that harms the reputation of another individual. Examples of libel include cartoons, text stories, and other written statements that are false and harm, or could harm, another individual's reputation. Another type of defamation is slander, which is defined as an oral or spoken statement, such as a speech or lecture, that similarly damages the reputation of another.

A libelous statement is false statement that damages another individual's reputation. Libel is a type of defamation that is made in writing or other physical, non-verbal communication and made in public to at least one person. The other type of defamation is slander, which is a false statement made orally. An individual who feels they have been a victim of libel can file a lawsuit against the individual who made the statement. To prove libel in court, one must prove to the court that the statement is a lie and has, or could, damage their reputation. Government officials and other public figures must prove that the defendant had malicious intent when making the statement. A key libel case is Sullivan v The New York Times, in which a police commissioner in Alabama sued the newspaper over an ad critical of his department's treatment of civil rights protestors who marched with Dr. Martin Luther King, Jr. The case made it easier for newspapers to cover the civil rights movement.

This lesson introduced you to the legal concept of libel and gave you a detailed explanation of how libel is prosecuted, including some famous cases. Take a look at the prompts below to explore this topic in more detail.

A Brief for the Defence

Imagine that you are a defence attorney whose client has been accused of libel. Using a real libel case as your template, consider how you would go about defending your client against the accusations in a court of law. Make sure to keep various aspects of libel in mind as you write your statement, including damage to one's reputation and malice.

When did libel laws first come into being in America? Which countries predate America in terms of libel laws? Write a detailed timeline of events leading to the creation of modern-day libel laws, and make sure to include important cases if possible.

In Your Own Words

Libel law includes several specific qualifying factors. Can you remember all of them from this lesson? Write a paragraph explaining when and how libel can be prosecuted in court. Then, find a friend or family member and, using your paragraph, explain what you have learned about libel. Be prepared to answer any of their questions should the need arise.

What is the difference between slander and libel?

"Defamation" is an untrue statement that damages another individual's reputation. Libel is a defamatory statement is written and published. If the statement is spoken or conveyed orally, it is considered libel.

Is libel a crime?

What is an example of libel?

One example of libel occurred in when the Sun, a U.K. media outlet, published a story reporting that Cameron Diaz was having an affair with a married man, which was untrue. Diaz filed a lawsuit against the Sun and was awarded damages in 2005.

What is the meaning of libel case?

A libel case is a civil lawsuit filed by an individual who says they have been harmed by false statements written by another individual. The purpose of such suits are generally to force the retraction of the false statement and to obtain damages for the harm done by those statements.

Sedition Law | What is an Act of Sedition?