What does manufacturing mean? Many of the products that consumers buy and utilize are the result of manufacturing. They undergo the process of design and assembly before arriving in stores for purchase. Manufacturing is defined as the conversion of raw materials into finished goods through the use of tools, labor, and machinery. Raw materials include items such as wood, stone, and ore. They become finished goods including lumber, pillars, or steel for construction. 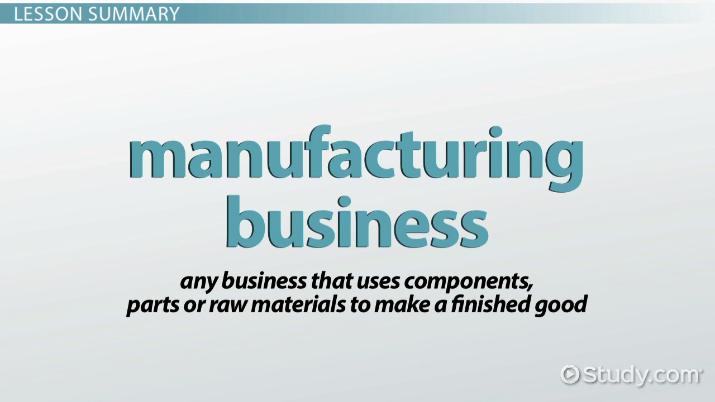 History And Development of Manufacturing

Before the large-scale production of goods, many items were made by hand and took specific skills and human labor to create. Manufacturing businesses became popular in the 19th century during the Industrial Revolution, which began in Europe and spread to North America. New technologies such as steam power and natural sources of fuel allowed for production to be sped up by a large margin, therefore meaning more goods could be manufactured in a shorter amount of time. The number of workers and human labor required to produce these goods decreased because of newer and more automated technologies as well.

By the early 1960s, engineers began to experiment with robotic machinery. Robotic arms, in the automotive industry, for example, reduced the human labor involved in the assembly process and allowed even more products to be manufactured in less time. The additional goods delivered to the market benefited the growing number of consumers as well as the national Gross Domestic Product (GDP), in turn growing the economy. The Market Value Added (MVA), an estimate between the value of a company or the economy and its relationship with investors and consumers, also benefits when more goods are able to be delivered to consumers with a high demand for a product.

Due to the high volume of production that often occurs within manufacturing businesses, many are regulated by strict rules and procedures set forth by the Occupational Safety and Health Administration (OSHA). Remaining incident-free, operating in a safe and efficient manner, encouraging environmental and eco-friendliness, and properly complying with legal measures are all objectives that companies promote. OSHA closely monitors and inspects manufacturing businesses to ensure that regulations and labor laws are being followed. They also exercise the authority to hold companies accountable for non-compliance through fines and training programs.

Labor unions also play an important role in the manufacturing industry. Unions represent the workers within a specific company or field and fight for their rights as individuals. Though labor unions have become less prevalent in the manufacturing industry within the last 50 years, they continue to negotiate workers' rights, wages, and benefits within the industry. Companies must pay careful attention to labor laws, environmental laws, and state and local regulations to comply with both union and OSHA standards.

Profit And Loss in Manufacturing Businesses

Within any business, either manufacturing or consumer wholesale, a margin for profit and loss exists as part of the economic cycle. When customers have a high demand and manufacturing companies are able to produce enough output to meet the demand, a profit is made. Conversely, if there is a high demand for a product but the product cannot be produced, then a manufacturing company or store may incur an economic loss. A similar situation would occur if there is little demand for an item.

The margin for loss is much more unpredictable than generating a profit from any given item. Losses may be the result of a lack of raw materials or components, a lack of consumer demand, malfunctioning machinery in the assembly process, labor laws causing strikes, or other safety issues. The cost of raw materials may also be higher than the final produced good, meaning that loss is incurred before the product even meets the consumer. Though a rare occasion, companies must monitor this factor as well as other more likely causes of loss in order to plan how to handle manufacturing ventures in the future.

In the 1970s, the United States saw a shift in manufacturing businesses. Goods being produced domestically began to be produced internationally through a concept called offshoring. The Manufacturing Belt of the United States, also referred to as the Rust Belt, became the victim of cheaper production costs elsewhere and was abandoned in favor of greater economic gains. In recent years, the Midwestern United States where the Rust Belt is located has experienced a resurgence in domestic production, bringing jobs and financial gains to the local and national economies. Innovation and implementation of new technologies have greatly impacted these events.

The future of manufacturing appears to be expansive and impactful to the markets which require this process. Technologies are constantly evolving to meet the growing consumer demand and deliver products in the most timely and quantifiable manner. Many manufacturing businesses are shifting to more automated technologies to become more competitive and produce more goods. Employment has also benefitted the manufacturing industry, particularly in the field of engineering. Manufacturing businesses remain an essential aspect of the economy and consumer market and will only continue to grow as technologies and consumer demands evolve.

Manufacturing, also sometimes referred to as fabrication, is the process of converting raw materials into a finished good by the use of labor, tools, and machinery. A manufacturing business is a business that uses components, additional parts, or raw materials to make a finished good. Products can be delivered directly to the consumer, to a store, or to a business within another industry such as construction. Manufacturing became more significant during the Industrial Revolution and was improved by the evolution of the assembly line, a production process that allows for higher output while reducing time and labor costs.

What are some examples of manufacturing businesses?

What are the examples of manufacturing?

Many of the products which consumers buy in stores such as Wal-Mart or Dollar Tree are the result of manufacturing. A manufactured good is not a raw product (wood, ore, etc.), but rather a finished good such as a doll, clothing, tires, or a car.

What are 3 manufacturing companies?

Manufacturing businesses are businesses that use raw materials, additional parts, or components to create a finished good. Three manufacturing companies are:

Bookkeeping vs. Accounting Overview & Examples | What is Bookkeeping?

How to Dissolve a Corporation

The Importance of a Healthy Employer-Employee Relationship