The literal definition of metastasis is to move from one part of the body to another. However, this term is most commonly used to refer to the process by which a secondary cancer grows in a different location from the primary location of the cancer. This may mean that the primary cancer was found in the lungs, however later in its course, tumors can also be found in the liver or bone. Those secondary tumors would be considered metastatic. 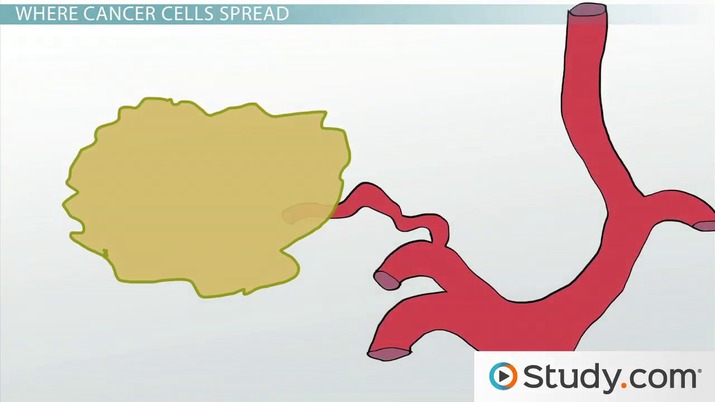 Coming up next: The Progression of Cancer: Grading, Staging & Diagnosis

How Does Cancer Spread or Metastasize?

To survive and grow, larger tumors need nutrients. The easiest way to obtain these nutrients reliably is through contact with blood vessels. To ensure their continued growth, tumors undergo a process called angiogenesis. Angiogenesis is when the tumor uses chemical signals to encourage the body to grow blood vessels into the tumor. There are numerous chemicals released, but perhaps one of the most important is the release of vascular endothelial growth factor, or VEGF. Unfortunately, in addition to allowing tumor growth, these new blood vessels also provide a clear path for cancer cells to spread throughout the body via the vascular system. The lymphatic system is structured in a similar manner to the vascular system, that is, it is a series of vessels that stretch throughout the entire body and transport fluid. The lymphatic system primary collects excess fluid from extracellular spaces, but it also transports particulate matter and sometimes cancer cells. Much like the vascular system, the lymphatic system provides an easy pathway from cancer cells to travel to far-reaching parts of the body. In the case of the lymphatic system however, immune cells often congregate in junctions called lymph nodes, where they can potentially identify cancer cells in addition to foreign pathogens. Because the lymphatic system is a common route for cancer cells to travel, the lymph nodes are also a common location for metastatic tumors.

The steps cancer metastasize can be summarized as:

1. The cancer grows into surrounding tissue

2. The tumor grows through the walls of nearby lymphatic and blood vessel walls

3. Cells break away and travel through the lymphatic and/or vascular system

4. Move through distant vessel walls and into nearby tissues

5. The cancer reproduces and grows small tumors in this new location

Metastatic cancer cells can also remain inactive in these distant locations; they can sit idle for years before they begin to grow again.

When cancer metastasizes, there are often no symptoms to signal the cancer's progression. When symptoms do present themselves, they are unique to the specific locations in which the tumors have formed, and can vary based on the size of these metastatic tumors.

The goal of metastatic cancer treatment is often to slow or stop the growth of metastatic tumors. The specific treatment available may vary depending on the location of the primary cancer, the location of the metastatic cancer, and what previous treatments the patient has undergone. Many patients live for years through managing the growth of these metastatic cancers. Some patients instead elect to treat only the symptoms as a means of improving their quality of life and diminishing pain, a treatment plan known as palliative care. The decision is ultimately a personal one that should be discussed by the patient and their physician to determine available options.

Metastasis is when cancer spreads from an initial tumor, or primary cancer, and forms tumors in a different part of the body. These new tumors are called metastatic tumors. Metastatic tumors are named based on the location of the primary cancer, so if the primary cancer was located in the brain and metastatic tumors were found in the liver, they would be called metastatic brain tumors. When the cancer disease process progresses to metastasis, it is often called Stage IV cancer. Cancer metastasizes when cells from the primary cancer break off and travel through the lymphatic or blood vessels. After traveling a distance, they move through the vessel walls and into surrounding tissue, where they either begin to grow or remain dormant for years before growing. Tumors may invade local blood and lymph vessels, but they are also capable of encouraging new blood vessels to grow from existing ones in a process known as angiogenesis. The tumor accomplishes this by releasing chemicals into the body that signal the growth of these new blood vessel offshoots; one of the most important of these chemicals is vascular endothelial growth factor, or VEGF. Metastatic tumors may or may not produce symptoms, depending on the location and size of the tumors. When symptoms are present, they will be specific to the location of the metastasis. Common treatments for metastatic cancer include stopping or slowing the growth of the metastatic tumors; conversely patients may choose to simply manage the symptoms in what is known as palliative care.

What stage is metastatic cancer?

What are the three common routes of metastasis?

The three common routes of metastasis are:

1. When the tumor grows into surrounding tissue

2. When cells travel through the bloodstream to a new location

3. When cells travel through the lymphatic vessels to a new location

What is meant by cancer metastasis?

Cancer metastasis is when cancer cells from a primary location, or primary cancer, break away and travel through the blood or lymphatic vessels to create tumors in a distant location in the body. These new tumors are called metastatic tumors.

Carcinogen Overview & Examples | What is a Carcinogen?