Copyright
Anthony Hope, Shawn Grimsley
Learn about political realism and realism in international relations. Find out what structural realism is and explore the theory of international politics. Updated: 10/01/2021

Political realism is a significant theory in the field of international relations that seeks to explain state behavior under a set of specific and rigid assumptions. At its core, political realism is guided by three S's: statism, survival, and self-help.

Statism asserts that states are the only entity on the international stage that matter and that they are unitary (acting alone) and rational (acting in its best interests) actors. Survival identifies the state's primary goal is to survive in an international system characterized by anarchy. The final S, self-help, conveys the assumption that states cannot trust others in their pursuit of survival and must secure their security.

Political realism is further delineated into sub-theoretical frameworks, including:

While each sub-framework has its own nuance within the broader political realist theory, all forms of political realism fundamentally believe world politics is a field of conflict among states pursuing power.

The formal discipline and academic study of international relations using political realism were formed during and shortly after the Second World War. However, the primary assumptions underpinning this theory can be glimpsed in much earlier writings.

Structural realism, also referred to as neorealism in the academic community, is a major branch of political realism derived from classical realism. While the latter incorporates analysis of human behavior within state decision-making, structural realism focuses predominantly on the anarchic structure of the international system. In other words, structural realists see global conflict as inevitable because there is no supranational body that could prevent or mediate conflict between individual states. Therefore, structural realists assume that states must always be preparing for conflict because war could break out at any time.

Structural realists believe that understanding the international system is guided by the three S's of political realism. However, they do incorporate analysis of inter-relationships between distinct state entities, particularly regarding power relationships. A key concept in structural realism is polarity, the balance of power within the international system. Today, international theorists often describe the world as unipolar, with the United States acting as the sole superpower endowed with the ability to dominate international relations via their economic, political, and military supremacy.

However, polarity changes; during the Cold War, the international arena was described as bipolar, with the U.S. and Soviet Union competing for power and influence. The various degrees of polarity include: 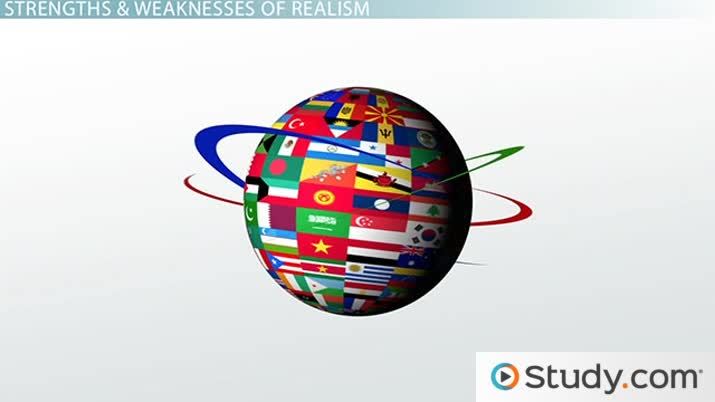 Realism is one of three major theoretical frameworks in international relations and is adhered to by many prominent academics. Realist theory is often seen as a classical framework and is incorporated into analyses of state relations from the Westphalian system beginning in 1648 and continuing to today. Seeing the world through a realist lens has contributed to many notable foreign policy positions throughout history.

During the Cold War, the U.S. and Soviet Union competed for global hegemony to influence the world according to capitalist and communist principles, respectively. U.S. diplomat George Kennan recommended a policy of containment to mitigate potential security threats from the Soviet Union. Kennan was influenced by political realism, and he understood that each ideology propagated by the U.S. and Soviet Union could not coexist peacefully for long. According to the doctrine of containment, the spread of communism should be contained to where it was advocated and spread no further. Kennan and his contemporaries worried that communism could spread like a stack of dominos: once it reached one corner of the world, it was only a matter of time before it spread to neighboring regions.

Political realism has heavily influenced both the offensive and defensive strategies of nation-states. Classical realists incorporate individual-level biases into their analysis, viewing humans as inherently self-interested. Classical realists would argue that conflict is inevitable because fear of others benefiting first and contributing to a zero-sum outcome motivates pre-emptive action discourages cooperation.

Neoclassical realists hold that the actions of states can be explained as a function of the characteristics of the international system; this includes power distribution and polarity. It also includes cognitive variables at the level of the state and their decision-makers that incorporate perceptions and misperceptions of the capabilities and intents of other states.

The distinguishing characteristic of political realism is the assumption that only states matter in the analysis and conduct of international relations.

Like all theoretical frameworks describing the social and political phenomenon, political realism does have its critics. Realism seeks to explain why states act the way they do, holding many variables constant. Realists seek to explain the prevalence of conflict and war, the balance of power between hegemons and other states, alliances and defense burden sharing, arms races and offensive/defensive policies, and more. The political realist framework can inform essential considerations of the causes and consequences of the aforementioned phenomena, but realism cannot exhaustively explain everything between states; it seldom gives the whole picture.

Some critics of political realist theory argue that the theory overemphasizes military and economic power to the detriment of the importance of cultural and ideological variables. For example, liberal theorists argue that linkages created between states via a rules-based international order should not be discounted in explaining state behavior. Liberal theorists would say normative structures should be considered just as much as traditional security and defense factors.

Moreover, it appears the prevalence of conflict between states has been on a steady decline, especially among democracies (a theory known as the democratic peace theory). Many states continue to cooperate on non-security and defense issues, such as in the pursuit of enhancing human rights and responding to humanitarian disasters.

A variety of theoretical frameworks guides the study of international relations. Political realism is one of the major theories that seek to describe state behavior and the international system using a set of assumptions. The key assumptions include statism, survival and self-help and means that states are unitary and rational actors of importance, seek to secure their survival through reliance on their own means.

Political realism is a broad theory and has branches that provide further nuance to the study of international relations. A major branch of political realism is structural realism, which emphasizes states reacting to global anarchy in the international system. Realism has influenced many critical foreign policy decisions, such as George Kennan's advocacy for containment against the Soviet Union and communism during the Cold War.

Political realism is but one theory among others, and it does have its critics. Some argue that realists overemphasize security and defense considerations at the expense of cultural and ideological variables. Nevertheless, realism is a dominant and influential theory of international relations.

What are the main ideas of realism?

The main tenets of realism can be summed up by the three S's:

What is the realism theory in international relations?

Realism is one of the main theoretical frameworks that seeks to explain state behaviour. It is a theory that places states at the centre of analysis and is concerned with states, power and state interrelations.

What are the types of realism in international relations?

Political realism is further delineated into sub-theoretical frameworks, including:

What Is International Relations?

Causes & Conflicts of the Indo-Pakistani Wars

What Makes a State Legitimate & Stable?