What is Psychological Abuse?

Short-Term consequences of psychological abuse are:

Long-Term consequences of psychological abuse are:

Psychological abuse is often a precursor to more severe abuse, such as physical abuse, or more extensive medical conditions, such as fibromyalgia and chronic fatigue syndrome. Once an abuser has started abusing a victim, the abuse tends to get worse over time, not better.

The causes an abuser feels are reasons to abuse a victim with psychological abuse are not fully known. Researchers have determined several underlying characteristics that might cause one person to be psychologically abusive to another. There are some behaviors that might signal an abusive nature. These can include: 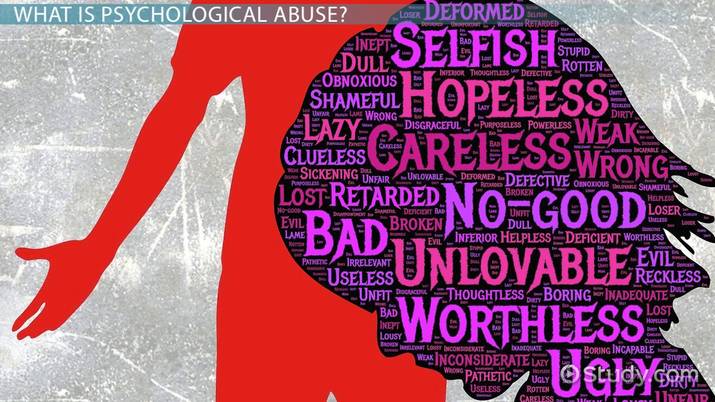 Often, since psychological abuse typically occurs in cycles with moments of non-abusive behavior, the victim does not seek help or a way to stop the abuse. If a victim comes to realize they are in an abusive situation, there are many things they can do to change their situation:

There are times after severe psychological abuse that a victim needs to seek professional help. If the victim has thoughts or actions of self-harm or suicide, professional help is needed immediately.

Psychological abuse occurs in cycles, which makes seeking help very difficult for victims. The abuser has times of severe abuse followed by remorse and non-abusive behavior. The victim is made to believe that they are remembering things wrong or they are making the situations and feelings more than they actually were. Psychological abusers are manipulative and they are able to convince the victim any abuse is the victim's fault.

What is the definition of emotional abuse?

Abuse is any behavior intended to cause harm to another person. Emotional abuse is a form of psychological abuse that is intended to harm a person's self-esteem or emotions toward themselves.

What is the definition of psychological abuse?

What is the difference between mental and emotional abuse?

What is an example of psychological abuse?

Examples of psychological abuse can be humiliation, unnecessary control, shame, negativity, and emotional neglect. These behaviors can cause serious damage to the victim.

What Is Duty of Care? - Definition & Examples

Overt & Subtle Discrimination in the Workplace: Definitions, Examples & Impact

What Are the Three Levels of Decontamination in Infection Control?