What is REM Rebound

Anyone who has ever pulled an all-nighter probably has experienced REM rebound, whether they know what it is or the effect it has. REM stands for rapid-eye-movement and typically is used when talking about REM sleep, the period of sleep when dreaming takes place. During this dreaming stage, the brain shows some signs of wakefulness, including the movement of the eyes, from which the REM stage gets its name. REM sleep is crucial because it is responsible for brain health and, in particular, the parts of the brain associated with memory. A person who doesn't get enough REM sleep can wake up with migraines and may feel extra groggy.

When the brain doesn't get enough REM sleep, it will compensate the next time it rests by shortening other stages of sleep in order to enter REM sooner and remain in that stage for longer. This is what is known as REM rebound, effectively allowing the brain to make up for lost time. Because REM is so important to the brain's health and function, REM rebound is considered a healthy process. However, one should not aim to experience it because it is caused by unhealthy sleep practices which prevent REM sleep. When the body doesn't get enough REM sleep, it begins to build up a "sleep debt," and REM rebound is the body's way of repaying that debt later on. 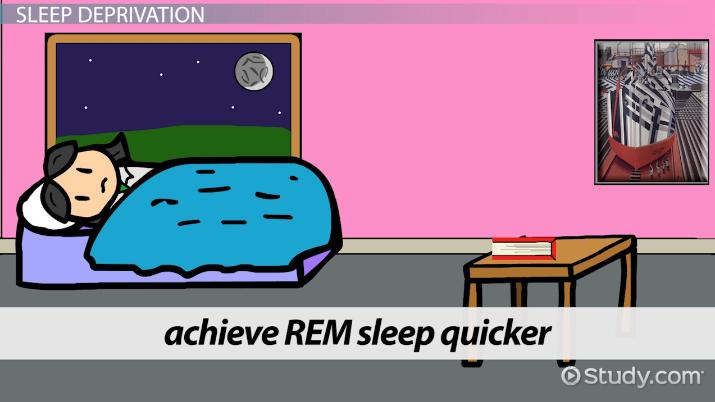 Cause of REM Sleep Rebound

Some causes of REM Rebound include:

REM sleep rebound is only seen when the brain hasn't had its required amount of REM sleep, so it is caused by things that prevent or reduce REM. One cause of rebound is a general lack of sleep. If someone doesn't get a decent amount of sleep on a given night, their body is unable to enter REM for the amount of time that it needs to be properly rested. This will cause REM rebound on subsequent nights to compensate. Things to avoid to prevent this cause include not staring at screens before bed, as the blue light makes sleeping more difficult. Similarly, avoiding caffeine later in the day can make it easier to fall asleep and, by extension, get the proper amount of REM sleep that is needed. Other factors that can cause a reduced amount of REM sleep include anti-depressants and alcohol. Some people insist that alcohol helps them sleep, and while it may indeed aid in falling asleep, it also causes the sleep to be lighter and prevents the brain from entering REM. This means you can get a full night of sleep and still suffer from REM rebound the next day.

What is Sleep Deprivation?

Sleep deprivation is a seemingly simple problem but has many major impacts. Sleep deprivation is a lack of sleep, and, in particular, an amount of sleep that does not fulfil the body's need. It is difficult to overstate the importance of sleep, as it is such a crucial aspect of everyday life and our body's ability to function. Without sleep, it is more difficult to remember important information and to maintain attention on important tasks and can cause feelings of fatigue. The more time the body goes without sleep, and without REM sleep, the greater these effects will be.

REM rebound's main purpose, and, therefore, most important effect, is improved restfulness. Because REM rebound helps catch up on REM sleep, it can compensate for sleep deprivation and the other effects that reduce REM sleep as discussed earlier. While REM rebound does have a healthy impact, there are other effects caused by the increased time spent in REM. As mentioned, REM sleep is stage during which dreams tend to take place, so the deeper the sleep, and the more time spent in REM, the more vivid dreams will be, including pleasant dreams as well as nightmares. Other side effects are similar to those resulting from lack of sleep, such as migraines and feeling a little groggy after waking up. These side effects are normal and shouldn't be experienced after catching up on REM. Because of the risks of a lack of sleep and the side effects of REM rebound, it is always better to get a good night's rest in the first place instead of relying on this emergency measure that the body has.

While REM rebound may have some negative impacts, it is necessary for our brain's health and ability to function after losing out on REM sleep. Rebound is seen after times of reduced REM caused by a general lack of sleep or some effect that reduces the brain's ability to enter REM for the necessary amount of time. The most common reason people experience rebound is due to sleep deprivation, but there are other causes, such as stimulants like coffee or antidepressants. Alcohol and excess stress can also inhibit REM through either reduced or lighter levels of sleep, which similarly would cause the body to experience rebound.

The best way to avoid REM rebound is to prioritize healthy sleeping habits, which allow for a full and properly restful night of sleep, and avoiding the risks listed above. Although you may not feel well rested after waking up from REM rebound, it is crucial to maintaining brain health and should not be a long-term problem so long as levels of sleep balance out after a period of deprivation. While this process is meant to protect the brain and ensure it gets enough rest after having a deficit, it is always better to be rested each night instead of having periods of little to no rest followed by periods of rebound. Maintaining a healthy and consistent level and amount of sleep is of great importance for being attentive and productive during the day.

What does REM rebound suggest about REM sleep?

REM rebound shows how important REM sleep is because the brain prioritizes it, and manipulating sleep function makes up for previously lost REM sleep.

What Is REM rebound and why is it important?

REM rebound is the brain's way of catching up on REM sleep, which is crucial to having a restful night of sleep.

What is an example of REM rebound?

How long does REM rebound last?

The amount of time that REM rebound lasts depends upon how much REM sleep was missed. The less REM sleep the brain receives, the more time it will spend in rebound.

Is REM rebound a sleep disorder?

REM rebound is not a sleep disorder, and actually works to counteract sleep disorders which inhibit or reduce the amount of REM sleep that people have.

When does sleep rebound happen?

REM rebound presents after someone doesn't get enough sleep. If someone stays up all night, they likely will experience REM rebound the next time they sleep.