What Is Working Memory?

Working memory is a type of short-term memory that stores information temporarily during the completion of cognitive tasks, such as comprehension, problem solving, reasoning, and learning. This temporary storage does not cause any changes in the brain, since it is short-lived and momentary.

In our daily lives, we regularly use working memory to complete tasks and go about our day. Below are some examples:

What is Working Memory Capacity?

Research has shown that the number of items we can hold at once in our working memory is seven, plus or minus two items. According to Miller, our ability to put new information into categories via the process of chunking increases the number of items we can retain at once. This involves grouping the information into meaningful pieces that can be remembered better. An example of this would be if you were given a list of unrelated words to retain, you would probably categorize them into respective chunks: for example, the words "bird," "mouse," and even "bug" could be classified into the 'animals' chunk, and "book," "pen," "house" into the ' inanimate items' chunk. Other theories, such as those of Cowan, claim that we can only retain three or four items at once.

Maintenance describes the ability to 'hold' information in the mind for a given amount of time. This is a very important feature about working memory to understand because, without it, we lose our ability to use and manipulate this kind of short-lived memory and information. Biologically, maintenance requires the activation of key brain regions associated with problem solving and memory, in addition to many other areas that may aid in our ability to use the information.

Rehearsal refers to the process of consistently repeating learned information in a meaningful way, such as going through a list of groceries not just seeing unrelated words, but trying to think of how they could contribute to future meals. Rehearsal could also be giving meaning to recently learned or encoded information, such as making mnemonics in order to remember a list of given words in order. For example, in order to remember the planets in our solar system in order, we can remember the mnemonic "My Very Educated Mother Just Served Us Noodles", corresponding to Mercury, Venus, Earth, Mars, Jupiter, Saturn, Uranus, and Neptune.

Maintenance and rehearsal are ways to increase the likelihood of remembering something. This is because memories that are not rehearsed or maintained degrade and become inaccurate over time.

However, memory capacity does decrease with age and disease.

The reason for the major differences between the two kinds of memory has to do with neural and biological underpinnings. Working memory does not involve long-term changes in the way our brains are organized or how the cells work, but long-term memory does. As such, working memory involves the temporary activation of the brain, whereas long-term memory brings about physiological changes within the brain's active networks and connections. 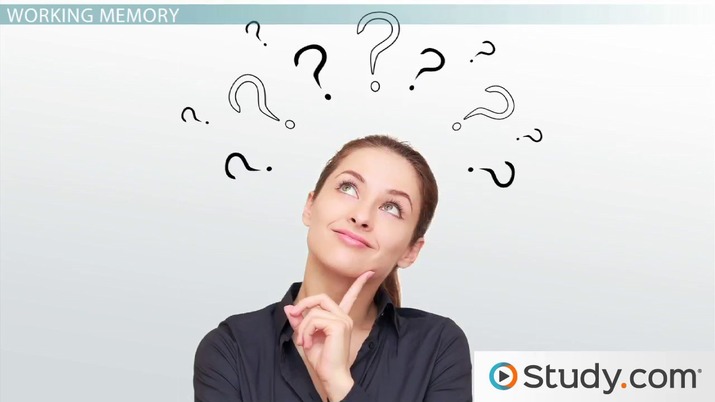 The key to improving working memory capacity and duration is to improve the processes that are involved, such as the processes of encoding and retrieving information. One example would be the use of mnemonics as mentioned above. Other ways of improvement involve the use of memory tricks and aids, such as chunking or giving meaning to the information given (like the example with the grocery list and meal ideas above). Below are other ways to improve working memory, especially in children:

How Does Working Memory Change Over Time?

Working memory capacity slowly increases with age during childhood; however it does reach a peak at a certain age in adulthood. This peak remains high for a few years before declining once more in old age. This is because our brains age with time and the processes involved in working memory, encoding and retrieving become less powerful. This may happen because the areas in the brain responsible for these processes become weak with time. In fact, studies have shown that working memory begins declining or degrading as early as 30 years old. This is because the ability to rapidly process new information, in addition to problem-solving speed, decreases with age as well. However, when working memory degrades, other compensatory mechanisms occur within the brain to make up for the changes.

Working memory capacity is small; however the technique of chunking may increase this because we can categorize or chunk information into meaningful groups. Maintenance of working memory corresponds to how we actively hold the memory in mind, and rehearsal is the process of consistently repeating the newly-learned information in a meaningful way.

Working memory can be improved using the following techniques:

Lastly, working memory increases throughout childhood and up to a certain age where it peaks, but it does decrease over time with age.

What is the role of working memory?

The role of working memory is to temporarily store information that you can actively use at a given time, without having it be encoded in your long-term memory

What is an example of a working memory?

An example of working memory would be if you are being told a story and you need to remember the story elements and characters in order to understand the story in full.

How do we use working memory in everyday life?

We use working memory to complete various tasks in our everyday lives. (For example, remembering our grocery lists while doing our shopping or looking at traffic lights.) We do not necessarily retain the information for a long period of time--just when we need it!

What is a working memory in psychology?

In psychology, the term working memory refers to the memory we use in the active and temporary encoding of information.