Copyright
Janelle Barowski, Trenton Mabey
Who is Atreus? Find out about the curse on The House of Atreus family tree in Greek mythology and how it affected its members. Updated: 08/14/2021

Who is Atreus? How old is Atreus? The House of Atreus is a lineage in Greek mythology of mortals who were cursed by the Olympian gods. The curse began with Tantalus, an ancient king of Lydia, and his unforgivable behavior towards his son, Pelops. The treacherous conduct continued with the grandchildren of King Tantalus, Atreus, and Thyestes. Atreus is best known for the tragedies involving his family. The cycle of malicious behavior, misfortune, and greed continued with every generation of the House of Atreus. 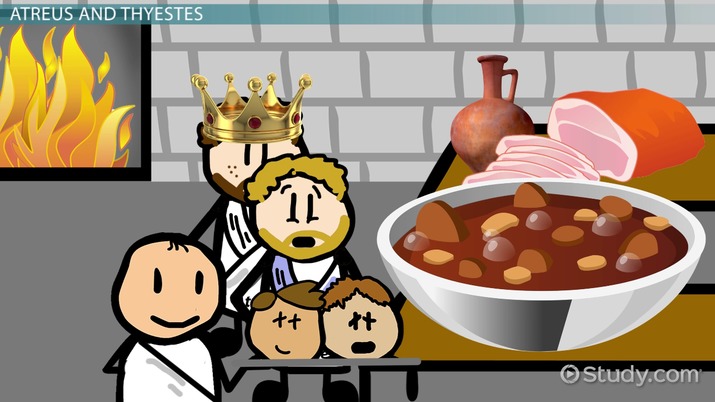 Coming up next: Atlas in Greek Mythology: Story & Facts

The House of Atreus: A Cursed Family Tree

The House of Aretus family tree was one of deceitful intentions and exploits that continued to infiltrate the lineage for generations to come. This lesson will focus on the House of Atreus and their family tree, along with the curse of the House of Atreus. This lesson will begin by focusing on the origin of the curse with the introduction of King Tantalus and his betrayal of the gods and his son, Pelops. Then, it will dive into Atreus and his intricate altercations with his younger brother, Thyestes.

The Curse of the House of Atreus

The House of Atreus began its cursed lineage with the greed of King Tantalus, a descendant of Zeus who was allowed to dine with the gods. This was a rare honor bestowed upon the mortal, and King Tantalus invited the gods to a feast in his home.

The gods descended upon the home, and King Tantalus served them a stew to test their divine ability to know everything. What the King had not told the gods was that he had butchered his son, Pelops, and served him in the stew.

The gods were not fooled and tasted the flesh of Pelops immediately. Demeter, overcome with her grief of losing her daughter to the Underworld, was the only god who continued to eat the stew.

Horrified, the Greek gods resurrected Pelops and made him whole again. Pelops would go on to father two sons, Atreus and Thyestes. King Tantalus was sent to Tartarus, the most severe part of the Underworld as punishment. He was forced to live for eternity with unquenchable thirst and hunger, and his lineage was cursed for his crime.

The House of Atreus is a cursed lineage in ancient Greek mythology, which often focuses on the generation of Atreus and Thyestes. The sons of Pelops, these brothers caused unforgivable mischief and deception within their family.

After his reincarnation by the gods, Pelops went on to become the King of Arcadia. He fathered many children, including Atreus and Thyestes with Hippodamia. Pelops' favorite child was an illegitimate son, Chrysippus. Hippodamia was distraught that Chryssipus would become king over her two sons.

Hippodamia conspired with Atreus and Thyestes to have Chryssipus murdered, ensuring her sons would ascend the throne. The brothers were exiled to Mycenae for their treacherous behavior, and the House of Atreus family tree continued to be cursed.

While Atreus and Thyestes were in Mycenae, an oracle claimed that the next king of Mycenae would be the son of Pelops. The sons agreed that it would be whoever could produce a golden sheep. Atreus owned the coveted sheep and quickly agreed to the terms. Thyestes seduced Atreus' wife, Aerope, and she handed over the sheep. Thyestes would be made king of Mycenae for the time being. The curse of the House of Atreus would continue, as the family battled amongst themselves for power.

Atreus would seek revenge on his brother, Thyestes, and attempt to claim the throne of Mycenae for himself. Atreus announced that Zeus wanted him to be king, as he was the oldest brother. He declared that if Zeus, the king of the cosmos, made the sun rise in the West and set in the East, he would be the rightful king. Normally, the sun rises in the East and sets in the West, so Thyestes agreed to the terms. The next day, the sun reversed its order, and Atreus was made the king of Mycenae. In retaliation, Atreus killed Thyeste's children and served them to him in a meal. Thyestes was exiled, and the curse of the House of Atreus would linger.

Atreus finally dies at the hands of his family member, which is no surprise taking into account the curse that followed his family. Thyestes spoke to an oracle who advised him to impregnate his daughter, Pelopia. His son would some day avenge his father and kill Atreus. Thyestes forcibly impregnates his daughter and she gives birth to Aegisthus. Pelopia abandons him out of shame, and Atreus raises him. Atreus and Aegisthus plot to kill Thyestes. However, when Aegisthus goes to draw his sword, Thyestes recognizes Aegisthus as his son. Aegisthus is convinced by his true father, Thyestes, to kill Atreus. Aegisthus does so, completing the oracle's prediction and continuing the curse of the House of Atreus.

The House of Atreus develops further when he has children, Agamemnon and Menelaus. The descendants of Atreus, including his sons, are sometimes referred to as Atreides.

Menelaus and Agamemnon are notable for their roles in the Trojan War and were cursed with fighting in this tedious war. The war began with the kidnapping of Helen of Troy, the wife of Menelaus. He fought under the command of his older brother, Agamemnon, and the brothers were able to bring Helen home. Agamemnon was the eventual king of Mycenae after Atreus and the leader of the Greek army in the Trojan War. He would go on to marry Helen's sister, Clytemnestra, after killing her first husband, the son of Thyestes, and their son.

Clytemestra and Agamemnon would have four children:

Agamemnon would go on to sacrifice Iphigenia in an attempt to please the goddess of the hunt, Artemis. He had offended her after boasting that he was a better hunter, and she was preventing his ships from sailing freely to participate in the Trojan War.

Aegisthus, son of Thyestes, seduced Clytemnestra, Agamemnon's wife, in an act of revenge while Agamemnon was fighting in Troy. Upon his return, Aegisthus slew him and his men. The lovers lived together for seven years before Orestes, son of Agamemnon, avenged his father. Orestes would kill Agamemnon, as the cycle of death, destruction, and deceit continued in the House of Atreus.

Electra and Orestes are close in Greek mythology. When presented with the supposed ashes of Orestes, Electra flies into a rage. She seeks revenge on her mother, Clytemnestra, and kills her. The House of Atreus is filled with anger and revenge for generations as the curse lives on in their lineage.

The House of Atreus and the curse of their family can be described as a Greek tragedy. Specifically, Elektra, Orestes, and Iphigenia are exemplary templates. They had Greek gods as some of the characters in their storylines. These stories also dealt with heart-wrenching moral dilemmas that their characters faced. In addition, the main characters were killed, creating a dramatic crescendo in the play. Without these Greek tragedies, we may not have the developed plots that we have in modern media.

The House of Atreus is a multi-generational curse of mistrust, murder, and mayhem that is embedded in the lineage of Atreus. It begins with King Tantalus, and his attempt at deceiving the gods into eating his son, Pelops. The curse continued with Atreus and his sons, Agamemnon and Menelaus.

Atreus fought with his brother, Thyestes, over the right to the throne of Mycenae. Thyestes slept with Atreus' wife to obtain the golden lamb and claim the throne for himself. After Atreus reclaimed the throne, he murdered Thyestes' children and served them to him in a meal. Eventually, Atreus was killed by Aegisthus, the son of Thyestes and his daughter. This vicious pattern of behavior continued throughout the lineage of Atreus, sustaining the curse on the House of Atreus.

What is the curse of the house of Atreus?

The curse of the house of Atreus is the inherent evil, deception, and murder that takes place generation after generation in the lineage of Atreus.

Who belongs to the House of Atreus?

All descendants of Atreus belong to the House of Atreus. This includes Thyestes, Aegisthus, Agamemnon, Orestes, and many more that originated from this bloodline.

What crime did Atreus commit?

Thyestes and Atreus murdered their half-brother Chrysippus in an attempt to keep the throne to themselves. Their mother was also a part in the murder.

How did the House of Atreus get cursed?

The House of Atreus began its cursed lineage with the greed of King Tantalus, a descendant of Zeus who was allowed to dine with the gods. He fed his son to the gods.

Why is The Iliad Important Today?

Poseidon in The Iliad

Kleos in The Iliad

Andromache in The Iliad

The Iliad: Title Meaning & Purpose of the Story

Phaeacians in The Odyssey

Patroclus & Achilles in the Iliad | Who is Patroclus?

Apollo in The Iliad

20,000 Leagues Under the Sea Study Guide