The word "work" is used in many contexts, but in physics, work is done when a force causes an object to have a displacement. There are certain requirements that must be satisfied for work to be done on an object – force, displacement, cause. A force is a push or a pull, while a displacement is a distance traveled by an object in a specific direction. When I push a grocery cart down the aisle, my hands and arms exert force on the handle. This force causes the wheels of the cart to turn to allow it to move in the direction of my push, hence displacement. Since there is a force, displacement, and cause, work is done on the grocery cart. Consider another situation when a heavy book is picked up from the floor. A force is needed to lift the book, which causes it to be displaced from the floor. Therefore, work is done on the book. In these situations, the direction of the force and displacement is parallel.

Energy is the capacity to do work, and this work-energy relationship is shown in pushing the grocery cart, picking up a book, and many other situations. When work is done and the object moves, we say that the object has kinetic energy (KE) or the energy due to motion. The grocery cart and the book have kinetic energy because they move as a result of the forces acting on them. In addition, objects can have energy due to their position called potential energy (PE), also called stored energy. When a ball is placed on the top edge of an incline, it possesses potential energy because it has the potential or tendency to slide down the incline. In other words, it is called potential or stored energy because it has the potential to do work. Once the ball is released, this potential energy is converted into kinetic energy, and work is done.

It is important to note that there are situations when work is not done. That is, when the force applied is perpendicular to the object's direction of motion. When a restaurant server carries a tray and walks on a straight line, the force applied on the tray is upward while the displacement of the tray is horizontal. The upward direction of the force on the tray does not cause the tray to move along the horizontal direction; therefore, no work is done. For work to be done, the tray can be lifted from the table, which makes the direction of the force and its displacement parallel. In the same manner, no work is done when an object does not move, even when force is applied. Pushing a wall with so much force and not causing it to move results in no work done since there is no change in its energy. 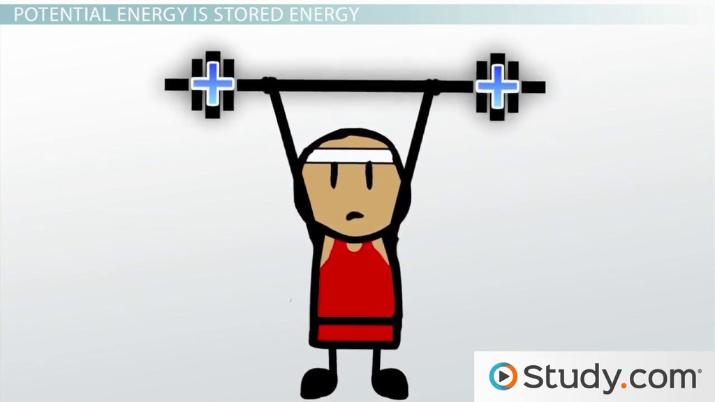 Try it now
Back
Coming up next: Conservation of Mechanical Energy

What is the Work-Energy Theorem?

The work-energy principle or work-energy theorem relates the work done by all forces acting on an object to its energy. It states that the total amount of work done on an object is equal to the object's change in kinetic energy (final kinetic energy minus initial kinetic energy). This principle applies when multiple forces act on an object that changes its state of rest or motion. Therefore, it is an important principle to understand how forces do work which eventually allows us to predict whether the object will speed up or slow down. When the object speeds up, its energy increases and the energy decreases when the object slows down. In the language of physics, "positive work" and "negative work" are sometimes being used. A positive work (+W) means that the object's kinetic energy increases, which means it is speeding up because of the force applied. If the kinetic energy decreases, negative work (-W) is done, and the object slows down.

The relationship between work done and kinetic energy can be expressed by the work-energy theorem formula expressed as:

The standard metric unit of work and energy is Joule (J). One Joule (1 J) of energy is equivalent to one Newton (N) of force, causing a displacement of 1 meter (m). Therefore,

A unit of force multiplied by a unit of distance is equivalent to a unit of work. Another non-standard unit such as foot-pound (ft. lb.) can also be used.

Consider a 2-kg object moving at a speed of 3 m/s at point X and then later found at point Y with a speed of 6 m/s. What is the total work done as the object moves from point X to point Y?

Equation: The solution for the problem can be set up such that,

The total amount of work done on the object is 27 Joules.

Let us look into another example. How much work is needed to stop a 2,000-kg truck that is moving at 60 miles per hour (mph)?

Solution: The mass of the truck is given, and the final speed is zero. The initial speed must be converted into metric units of meters per second (m/s) for consistency in the calculation. To do this,

Equation: The solution to the problem can now be set up such that,

Therefore, it takes 718,240 J of energy to stop a 2,000-kg truck moving at 60 mph. A small car moving faster than 60 mph may require the same amount of work to stop since a fast-moving object has higher kinetic energy.

Work is done when a force causes the object to have a displacement parallel to it. Likewise, work is not done when the force is perpendicular to the object's motion or when the object does not move after the force is applied. Energy is defined as the capacity to do work. Therefore, the relationship between work and energy as defined by the work-energy theorem states that the total amount of work done on an object is equal to the change in its kinetic energy.

Kinetic energy is energy in motion while potential energy is the energy possessed by an object due to its position. Potential energy is also called stored energy since it has the potential or tendency to do work. By convention, an increase in energy means that positive work is done, and a decrease in energy means that negative work is done. More work is needed to stop a fast car than a slow car because the fast car has greater kinetic energy. In solving problems that involve work and energy, the work-energy theorem formula is {eq}W = ?KE {/eq}. The work done is expressed in a unit of energy called Joule (J).

What is the work-energy theorem, and why is it important?

The work-energy theorem states that the total work done by all of the forces on the object is equal to the change in kinetic energy of the object. This theorem is important because it allows us to predict the direction, speed, or energy of a moving object.

What is an example of work energy?

The work-energy theorem is applied when a grocery cart is pushed in the aisle of a grocery store. The amount of force applied to the cart causes it to move and cover a horizontal distance, thereby increasing its kinetic energy.

What is the work-energy theorem equation?

Physics in Medicine Application & Examples | What is Medical Physics?

Centroid of a Semicircle Formula & Examples | What is the Centroid?

Physics in Medicine Application & Examples | What is Medical Physics?

Centroid of a Semicircle Formula & Examples | What is the Centroid?