World systems theory is a sociological and economic theory proposed in 1974 by sociologist Immanuel Wallerstein in a paper called The Rise and Future Demise of the World Capitalist System: Concepts for Comparative Analysis. World systems theory is a way of categorizing the countries in our world based on their economic power. Countries are categorized as either core, peripheral, semi-peripheral, or external.

Before world systems theory took off, one of the major theories of economic development was called modernization theory. This concept postulated that all countries go through roughly the same path from a poorer and more ''primitive'' economic state to a state in which they can thrive. While modernization theory was popular, it failed to account for the economic relationships between rich and poor countries. In response to modernization theory, sociologists posited something called dependency theory in which poor countries are exploited by rich ones, maintaining a status quo of wealth throughout the world. World systems theory ultimately grew out of and expanded upon dependency theory. 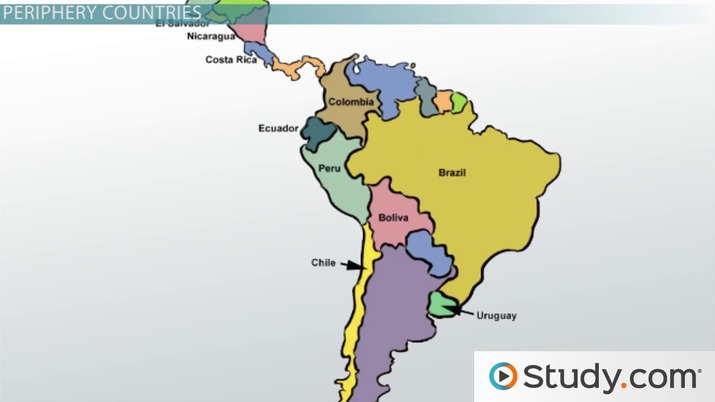 This is one example of a map of how countries relate to one another in world systems theory. However, different sociologists rank countries differently; no map is going to be a perfect representation of such complex economic systems.

It is also important to remember that countries' status in world systems theory are always changing. These changes are due to factors like military actions, geographic expansion, and changes in industrial production levels in a given country.

Core countries, according to world systems theory, hold a disproportionate amount of power on the world economic and social stage. They are capitalist countries that exploit peripheral countries for cheap labor and raw materials. Within core countries, the interests of a relatively small class of economically powerful people are the most important thing. Wallerstein argued that the first economic core was Western Europe, followed by the Britain, and finally by the United States today. Included among the many countries that are considered core countries today are:

The majority of core countries are found in Europe, North America, and Oceania. Generally speaking, core countries import a lot more than they produce, and many have a colonial history of controlling other, poorer nations.

The status of semi-peripheral countries may be less stable than those in other categories and might change more rapidly as the world economy shifts.

External areas are countries that do not participate in the capitalist dynamics that underpin world systems theory. Usually, this is because they are largely self-sufficient countries that produce their own food, use their own labor, and do not meaningfully exploit or defer to other countries. Russia is often cited as an external area, though not all sources agree on its status. It produces the majority of its own food and many of its own goods.

Wallerstein's theory can be applied to our world over the past few centuries. For example, in the medieval period, the Islamic Empire in the Middle East was the core of world power, particularly with respect to the Silk Roads. Power gradually shifted to parts of Europe like France and the Netherlands before shifting further west to Britain in the colonial age. The British Empire gradually declined as the United States rose in power throughout the nineteenth century. It can be argued that each of these cores (as well as other smaller cores) has exploited countries: the Islamic Empire exploited parts of Africa and Asia; European countries did the same, particularly in Africa. The United States exploits parts of Asia and South America, among other regions, today.

World systems theory is a highly regarded sociological theory today. Some of its strengths as a theory include:

There have, however, been many critiques of world systems theory, including the following:

These critiques are important to consider: while world systems theory is an effective way of understanding the world, it is not perfect. Wallerstein himself was aware of many of these critiques and acknowledged the validity of some of them.

We have already mentioned the fact that core countries change over time. So far, we have seen the major core of the world economy shifting west over the past thousand or so years. In the future, power will likely shift again. Many economists have talked about the potential for China to eventually overtake the United States as the primary core of the world economy as it shifts from the semi-periphery category to the core countries category. Some countries in Africa, especially places like Rwanda, South Sudan, and Ethiopia are quickly growing in GDP and may eventually become semi-periphery countries or even core countries with control over nations around them.

World systems theory was developed by Immanuel Wallerstein to explain the complex economic relationships that exist in our world. Wallerstein categorized countries as core countries, which exploit other countries for labor and resources; peripheral countries, which have cheap labor and are generally impoverished; semi-peripheral countries, which sometimes exploit other countries but are sometimes exploited themselves; and external states that operate outside of the world system. The world system changes as industrial expansion, military action, and geographic expansion alter countries' relationships to one another. World systems theory developed out of dependency theory but takes that idea further. While world systems theory has been widely regarded as a useful conceptualization of a complex system, it has received numerous critiques for the ways in which it fails to account for or outright disregards some elements of social and economic theory.

Make a poster or other type of graphic organizer that defines the world systems theory and lists the main characteristics of it.

Design a map that depicts the core countries, peripheral countries, semi-peripheral countries, and the external areas. Be sure to list the characteristics of each country to delineate what makes it a peripheral area, etc. You can use the countries provided in the lesson, or come up with other countries as examples (the latter encourages greater critical thinking). Tip: It helps to color code your map.

Write an essay that answers the following question: What might prompt a change in a country's status (i.e., from semi-peripheral to peripheral, from core to peripheral, etc.) according to the world systems theory?

Example: Begin with an introduction paragraph that defines the world systems theory and presents a thesis statement. Then, construct the essay using the characteristics of the world systems theory hierarchy to explain what makes certain countries periphery, core, etc., and then explain how those characteristics can change, and how that can cause shifts in status. For the conclusion paragraph, you could explain what present-day country you think might be undergoing or ready to undergo a shift.