Nathan Murphy, Amy Lively
Learn about the cause of the XYZ Affair. Discover the historical context that led to the affair. Explore the XYZ Affair's significance, how it was resolved, and it's relationship to the Quasi War. Updated: 10/08/2021

What Was the XYZ Affair?

The XYZ Affair refers to a diplomatic mission between French and American diplomats. European countries, especially France and Great Britain, were often involved in some war or conflict. Because of this, President George Washington established the principle of American neutrality. The United States was not going to involve itself in the countless European wars which surely would occur in the coming decades and centuries.

By the time John Adams became the second president, Great Britain and France were at war again and Adams adhered to Washington's guidance and refused to involve the young nation. The United States continued to trade with both countries even while they fought each other. However, the French government did not think the United States should be trading with the British and this was the central issue of the affair.

The XYZ Affair's date is 1797, when John Adams sent three diplomats to France in hopes of finding a peaceful remedy to the rise in tensions. 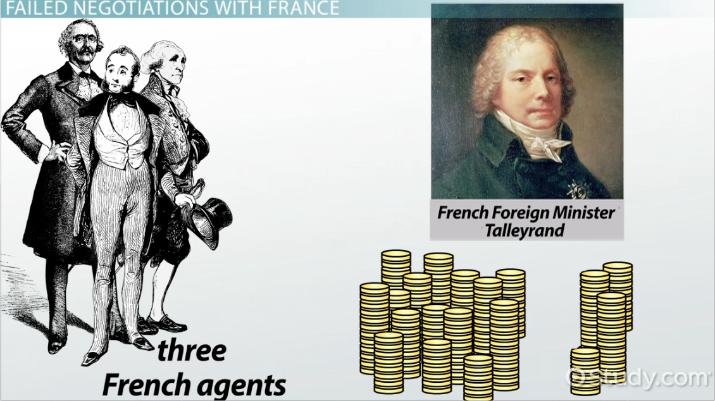 Coming up next: What is the Alien Act of 1798? - Definition & Overview

The French monarchy had financially and militarily supported the colonists during the American Revolution and went deeply into debt as a result of that support. This debt, plus excessive spending by the French King and Queen, meant that common people had to pay an increasingly large amount of taxes. By 1789, unrest about taxes and a desire for a representative government led people to rise up and establish their own government. This began the French Revolution and within years the new government executed the monarchs and began to transform French society. However, other European monarchs like King George III were not happy about the French Revolution, because if French subjects could overthrow the king of France, English subjects may be inspired to do the same to the English monarchy. This fear by monarchs resulted in the War of the First Coalition, in which leaders of Great Britain, Prussia, and Austria attempted to reinstall a monarchy, thereby bringing stability to their own empires.

What Caused the XYZ Affair?

During this period, the United States signed the Jay Treaty in 1794, which gave favored nation status to Great Britain. This status meant that they took precedent over all other nations when exporting goods overseas. With France in the midst of a revolution, and the United States making a trade deal with their enemy, French politicians felt betrayed. Thomas Jefferson and the Democrat-Republicans thought the country had an obligation to help France in their fight for democratic values, while Alexander Hamilton, John Adams, and the Federalists favored Great Britain and wanted to uphold the precedent of neutrality that Washington had established.

By 1797, French ships had begun to board American ships and seize any goods that were bound for Great Britain. The French government recognized the U.S. was going to continue trading with the English and began to militarily prevent the flow of goods from across the Atlantic. John Adams sought to find a peaceful resolution to this aggression. However, he also called for the American military to prepare for a French invasion of the American coast.

What Happened in the XYZ Affair?

After giving a speech to Congress calling for war preparations, John Adams began to organize a diplomatic mission to France in which three Americans would attempt to negotiate with the French government.

In July of 1797, John Marshall, Thomas Pickney, and Elbridge Gerry sailed for France and arrived at the beginning of October. The Americans were due to negotiate with one of the most prolific French statesmen, Charles Talleyrand. However, before meeting with him, three French diplomats began the negotiations and exposed the true goals of the French. The French diplomats Bellamy, Hottinguer, and Hauteval notified the Americans that if they wanted to negotiate with Talleyrand, the American government would have to give France a low-interest loan and pay Talleyrand a massive bribe. Only if those conditions were met could real negotiations commence.

Upon learning about these demands, the diplomats sent a letter back home to Adams to notify him of this bribery request. When Adams received the letter months later, he announced that the diplomatic mission had failed. However, Jefferson, who supported France, did not believe this and wanted the letter released so everyone could read it. Jefferson continually supported France throughout his career, and even made excuses for the French government during this affair. John Adams complied because he knew what was in the letter, and the only change he made was removing the names of the three French diplomats in case they continued to negotiate on behalf of the French government. He replaced their names with X, Y, and Z, and that is where the affair gets its name.

What Was the Impact of the XYZ Affair?

The impact of the XYZ Affair was that much of the country supported John Adams and his calls for military preparedness. By 1798, relations between the two countries deteriorated so much that a 'half war' began. Because the French continued to board American ships, and after the insult of the requested bribery, the United States navy began to attack French ships in the Caribbean and along the American east coast. This was done largely to protect the merchant ships that were threatened by French ships.

This was called the Quasi-War and spanned two years from 1798-1800. All-out war was feared so much at the time that George Washington reluctantly agreed to come out of retirement if the French invaded the United States.

How Was the XYZ Affair Resolved?

The XYZ Affair's resolution came with the Treaty of Mortefontaine in 1800. The Quasi-War continued even after the First Coalition War ended. By 1800 Napoleon Bonaparte had seized control of France and wanted to end this conflict so he could reassert control in French Caribbean colonies like Haiti. The United States and France quickly agreed to a peace treaty, but they did not fairly compensate American merchants for the years of losses caused by the French seizure of goods.

The XYZ Affair's significance centers around both good and bad consequences of the failed negotiation. The United States benefitted both from the negotiation itself and from its resolution. The affair also enabled John Adams to pass legislation that continues to cause problems in the 21st century.

The Department of the Navy

John Adams called for the establishment of the United States Navy as a result of rising escalations with France. The U.S. needed ships if it was going to protect its merchant ships. While the ships may have been used during the Quasi-War, the establishment of the navy was invaluable a decade later during the War of 1812 and likely would not have been established had it not been for this 'half-war' as John Adams called it.

The Alien and Sedition Acts

Because the Quasi-War was the first conflict the United States had with a European nation as an independent country, John Adams attempted to deal with the issue of French living in the U.S.

During this conflict, Adams passed the Alien Act and the Sedition Act which gave him the power to deport French nationals if they were deemed a threat to national security, and to censor criticism of the administration in media such as newspapers. These acts destroyed Adam's reputation, and he lost his re-election campaign in 1800 to Thomas Jefferson as a result.

This set the precedent for other presidents to control free speech during wartime, such as Franklin Roosevelt's decision to intern Japanese-Americans during World War II because they were of Japanese heritage.

Napoleon Bonaparte was not able to maintain control of the French Colony of Haiti because the enslaved peoples revolted and established their own government. This meant that the Louisiana territory was no longer important to French interests since it predominantly was used to feed people in Haiti. Because French-American relations had been reestablished in 1800 with the treaty of Mortefontaine, Napoleon was willing to sell the territory to the United States for a very small amount of money.

Moreover, by this time Thomas Jefferson had become president and he was always aligned with the French even before the XYZ Affair. This meant that France not only had positive relations with the U.S. after the signing of the treaty, but that Napoleon also had a sympathetic leader in the White House who was more than willing to negotiate with France.

The XYZ Affair was a source of tension both between France and the United States as well as between the two factions in American politics.

The legacy of the XYZ Affair is both positive and negative. The Navy was established, and the Louisiana Purchase allowed for U.S. expansion. However, the legislation Adams helped to pass has been utilized to justify infringing on the rights of many Americans over the past two centuries.

What did the XYZ Affair cause?

The XYZ Affair caused heightened tensions between the United States and France. This resulted in the Quasi-War which was the U.S.'s attempt to prevent France from confiscating more goods bound for Great Britain.

The XYZ Affair was a failed negotiation attempt between the United States and the revolutionary new French government which needed money during its defensive war with Great Britain. This led French diplomats to ask for money before negotiations even could begin. The Adams Administration instantly refused this proposal.

Why did they call it XYZ Affair?

It was called the XYZ Affair because John Adams released the letter sent by American diplomats but redacted the names of the French diplomats in case they participated in the negotiations again. Their names were replaced with X, Y, and Z.

How did the XYZ Affair affect the US?

The XYZ Affair effected the United States because American merchants continued to lose money from confiscated goods. It also heightened partisan divide between Federalists and Democrat-Republicans who disagreed over giving support to the French cause.

XYZ Affair Cause & Significance | What Was the XYZ Affair?
Related Study Materials