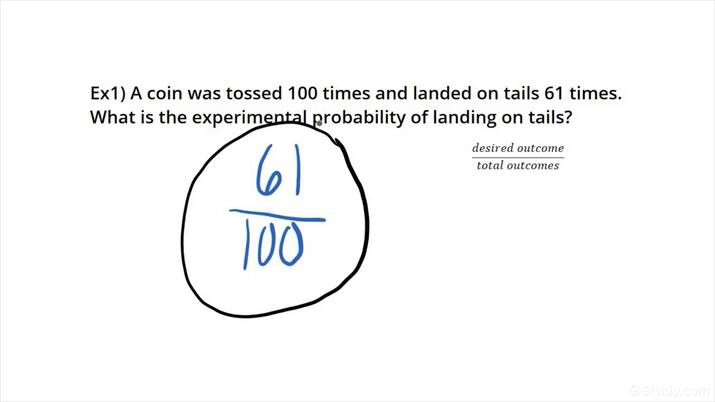 Register to access this and thousands of other videos

How to Calculate Experimental Probability

The following two problems demonstrate how to determine the experimental probability of an event.

A die is rolled 100 times and the following outcomes are recorded:

Determine the experimental probability of rolling an odd number with this die.

Therefore, the probability of rolling an odd number with this die is experimentally the ratio of these two:

We will multiply this number by 100 to express it as a percentage:

With this (not fair) die, there is a 58% chance of rolling an odd number.

After a night of bowling, the scores of every bowler in the building were tallied up:

What is the experimental probability of bowling a game better than 200 on this night?

In this case, there is basically no way to even calculate theoretical probabilities of a night of bowling since it depends on so many different, unpredictable factors. The experimental odds are the only way of determining an approximation of the odds.

Therefore, the experimental probability of bowling a game above 200 is:

There was an 8.75% chance of bowling a game above 200 at this bowling alley on that night. Please note that this is not the odds of bowling a 200+ for any other circumstance as the game count that night depended upon who was there, their skill level, and their luck that night. A new group of people might produce entirely different results.

What are Trees in Discrete Math? - Definition, Types &...

Calculating the Velocity of the Center of Mass

Molly Maguires Overview & Significance | Who were the...

Maginot Line History, Purpose & Map | What is the Maginot...

Speaker in Poetry: Analysis & Examples | How to Identify...

Argentinosaurus Facts, Size & Fossil | What is an...

William B. Travis Biography & Accomplishments | Who was...

What Is the Function of Protein Synthesis?

Petruchio in The Taming of the Shrew

How to Pass PECT Exams

How to Register for the SLLA Exam

What is the SLLA Exam?

How Long is the School Day in a Homeschool Program?

How to Register for the CDA Test

How to Pass the CDA Test

How to Pass the PSAT

What is a Lexile Score?