Try it risk-free for 30 days
Instructor: Shelby Golden
Develop your understanding of the Earth science standards used in New York with this article. Find out what students will learn in this class, get information about the Regents exam and access study resources.

Students in elementary school will study the patterns found in the environment, including patterns among the sun, moon and stars. They'll also learn about ways that water, air and land connect to one another. Students can check out these geology and astronomy lessons for kids to review what they're learning in these grades.

In middle school, students will learn how the Earth changes over time. They will consider the spheres of the Earth, as well as the rock cycle, weather and climate. Middle schoolers will have the chance to investigate natural phenomena, such as earthquakes and volcanoes. This online Earth science for middle school course can be used as a study companion for students. They can check their knowledge of each concept with short quizzes and practice exams.

Students who take this course will learn about the motion of the planets in our solar system, including their orbits. They'll study Earth's rotation and revolution. The effects of the sun and moon on the tides will also be covered.

Students will find out more about the origin of the solar system and universe, as well as the formation of stars. Time will be spent studying asteroids, meteors and other celestial objects. The formation of Earth's atmosphere and oceans will be considered, along with the water cycle. Students will focus on the evolution of life, the rock record and geologic history.

The sources of energy in Earth systems will be discussed in this class, along with weather patterns and variables. Seasonal changes, Earth's internal structures and the transfer of heat energy in the Earth will be studied.

Students will learn about the lithosphere, plate dynamics, topographic maps, climate variations, weathering, erosion and patterns of deposition. Students will find out more about insolation, cosmic radiation and local climates. In this class, students will also study the properties of atoms, minerals and rocks.

Help your students learn about these Earth science concepts and more with this high school Earth science course. This resource is accessible 24 hours a day, 7 days a week. It includes video lessons with easy to follow transcripts, flashcards and lesson plans for teachers.

Did you know… We have over 220 college courses that prepare you to earn credit by exam that is accepted by over 1,500 colleges and universities. You can test out of the first two years of college and save thousands off your degree. Anyone can earn credit-by-exam regardless of age or education level.

You are viewing lesson Lesson 9 in chapter 5 of the course: 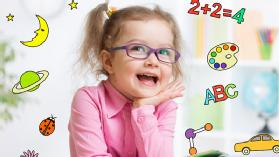 Explore our library of over 83,000 lessons